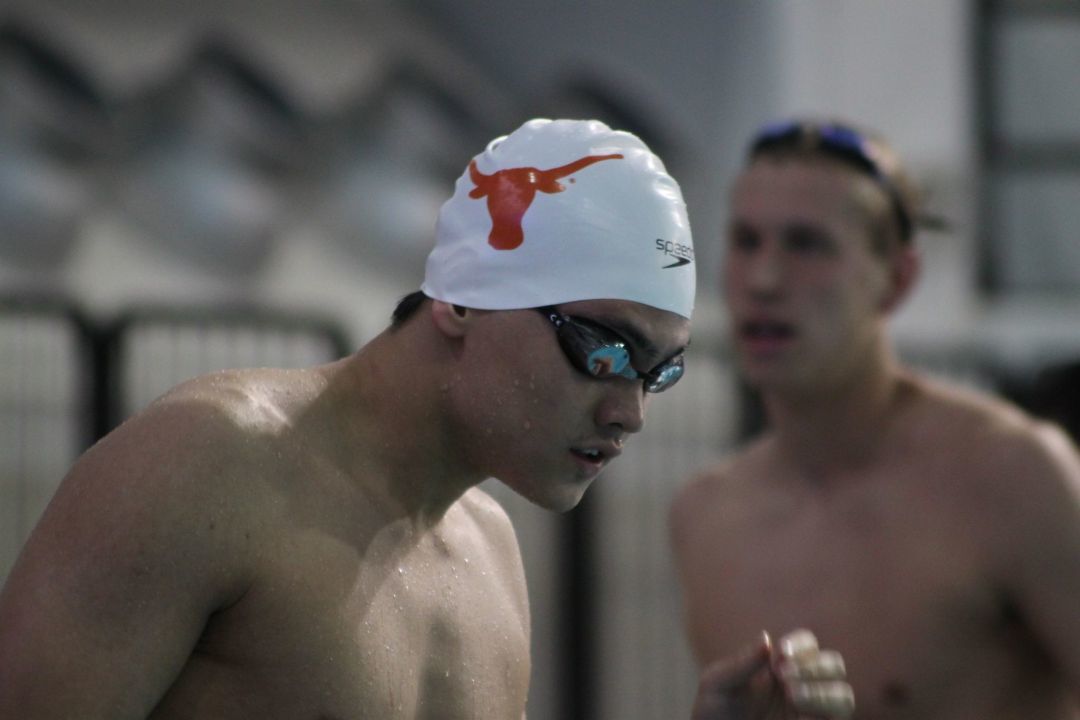 At the second day prelim of the Big 12, a strong freshman class is bringing exciting contributions to an already powerful roster for the Texas Longhorn men and women. Current photo via Andy Ringgold/Aringo Photography

Last night’s relay session saw the Kansas women and West Virginia men taking second in both the 200 medley and 800 freestyle relays, giving them a jump on the competition for a second place team finish behind the power of the Texas Longhorns.  The Big 12 is smaller in swimming than the other major sports conferences, causing many fans to pay more attention to the internal races of the Longhorn roster. The traditional depth they carry can give this meet the flavor of an inter-squad, where we get a sneak peek at the performances that will help shape the UT championship roster for NCAA’s.

The top three women heading into the final for the 500 turned in B cuts.  In 1st and 3rd place are a pair of freshman representing the Longhorns, Joanna Evans and Quinn Carrozza.  Evans turned in a 4:42.88, which is a slight drop from her previous season best performed at the UT Hall of Fame meet in December.  Carrozza added slightly from her December swim at that meet with a 4:44.44.  Between them, less than two tenths behind Evans, is Kansas senior Chelsie Miller whose 4:43.07 crushes any lifetime best we can find in the database, and sets a new Team Record for the Jayhawks by almost five seconds.  It will be interesting to see if she can repeat this inspired effort to take a win for Kansas in tonight’s final.  West Virginia’s Emma Skelley (4:51.47,) TCU’s Mikayla Winkler (4:52.61,) Texas’ Maggie D’Innocenzo (4:53.97,) Kansas’ Sammie Schurig (4:56.45) and WVU’s Georgia Baldus (4:56.52) will complete the rest of the A-final heat tonight after removing Texas’ lone B roster swimmer, Erin Yeager (4:55.81) from the heat.

Promote swimming? Prepare in a format similar to ncaa’s? Give “bubble” swimmers a chance at qualifying for ncaa’s? Give the Big 12 a conference champ? Tradition? The American Way?

Why even bother having a Big 12 Champs with three teams on the men’s side?

Really strong swim from Tate Jackson. As fast as it was, right now I’m guessing that doesn’t make the meet individually. I need a refresher, though, he can swim on the relay right?

Before you even go there… That was just his first swim of the meet, and he put himself on the qualifying bubble! He has plenty more shots to make it into the meet, and I expect him to do so.

True true. Still, there a plenty of swimmers who go their fastest during their first races coming from a shave & taper. I know nothing about Tate, so we’ll see what he does tonight and through the weekend!