BGSU Women Move to 7-0 with Win over Michigan State 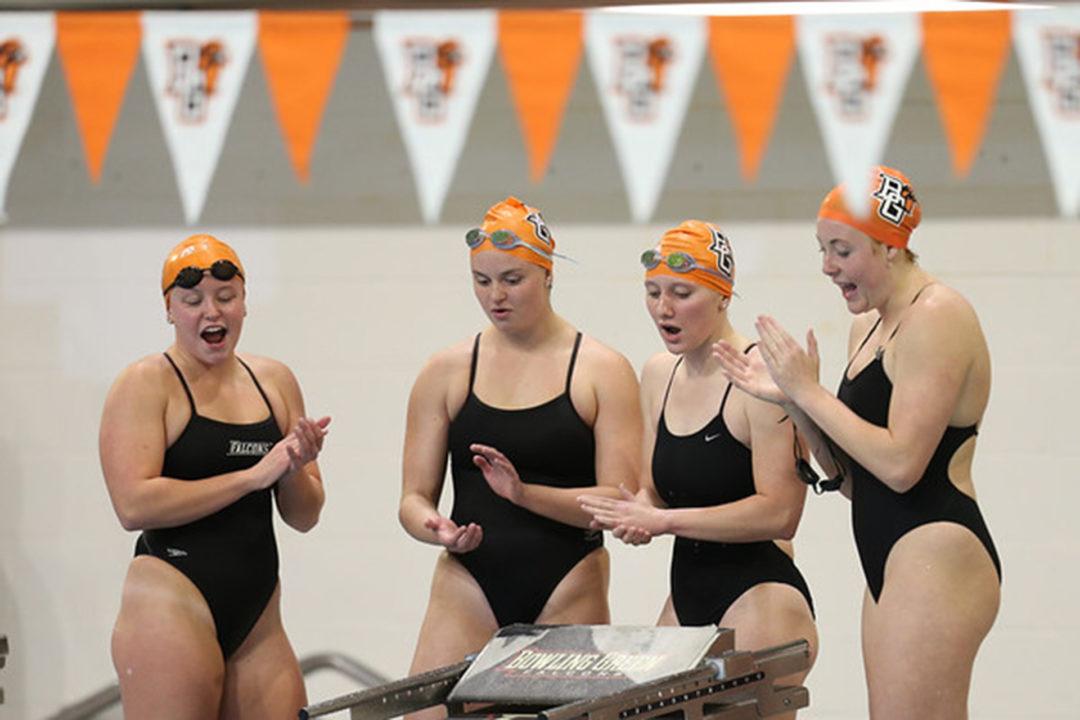 BOWLING GREEN, Ohio — The Bowling Green State University swimming and diving program finished first in 12 of 16 events to defeat the Michigan State Spartans 179-121. By defeating the Spartans, the Falcons improved their overall record to 7-0.

The Falcons are back at Cooper Pool tomorrow (1:00 p.m.) to host Youngstown State.

FIRST PLACE FALCONS
• Falcon swim teams placed first in the 400-yard freestyle relay, and the 200-yard medley relay. Franziska Wohlert, Daisy Platts, Kellie House, and Ashleigh Franks finished first in the 400 yard freestyle relay with a time of 3:31.99; Platts, Nicole Borgerding, Sarah Hennings, and Franks were the winners of the 200-yard medley relay with a final time of 1:44.87.
• Platts, Hennings, and Jordan Andrusak all collected a pair of first place finishes in separate individual events. Platts finished first in the 100-yard backstroke (55.12) and the 200-yard backstroke (1:59.43), Hennings finshed first in the 200 and 100-yard butterfly with times of 55.50 and 2:05.41,and Andrusak was the winner of the 200-yard breaststroke and the 200-yard IM at 2:21.67 and 2:08.69.
• Maddy Andrews claimed first place in the 200-yard freestyle event with a finish time of 1:53.76.
• Kellie House outlasted the competition in the 1000-yard freestyle to finish first at 10:34.61.
• Talisa Lemke was contributed 18 points to the Falcons’ final point tally with victories in both diving events (1-meter and 3-meter). Lemke was awarded 331.43 points in the 3-meter category, and 294.5 points in the 1-meter category.

COACH PERKINS QUOTE
“Super happy with how the girls performed tonight. We are on our way to having a good season. The girls are confident and they are having fun, and to beat Michigan State, a Big 10 school, we’ve been trying to do that for a long time, and to finally do it in that fashion is a great statement to how hard the team has been working, and the time they have put into the season.”

UP NEXT
Falcons Swimming and Diving are back at Cooper Pool tomorrow at 1:00 p.m. to face Youngstown State in non-conference dual meet.

“We traveled to Bowling Green today and we were caught a little flat footed. The Bowling Green team was ready and waiting for us,” said Associate Head Coach Kathleen Milloy. “We struggled a little bit, but after the first break the team did a great job of pulling themselves together. We had a much better second half, but we couldn’t make up for the hole we had created for ourselves.  A lot of great fight and a lot of great people in all four classes stepping up.”

Emily Brunett was MSU’s top finisher in the 100 Fly, finishing second in 58.32; Madeline Reilly was right behind in third in a time of 58.59.

In the 400 freestyle relay, Aycock, Heineman, Truex, and Chick claimed second place to end the meet with a time of 3:33.29.

“Tremendous swimming and the progress they’ve made in the last year is real credit to their determination,” said Milloy. “Now we’ll get reorganized, regroup and get ready for Northwestern next week”

Tomorrow, Nov. 10, and Sunday, Nov. 11, seniors Ellie Roche and Ana Sortland and juniors Michael Schwers and Payton Woods will be competing at the B1G-ACC All-Star Challenge.