Beyond The Lane Lines: Jamieson Inducted Into Bath Hall Of Fame 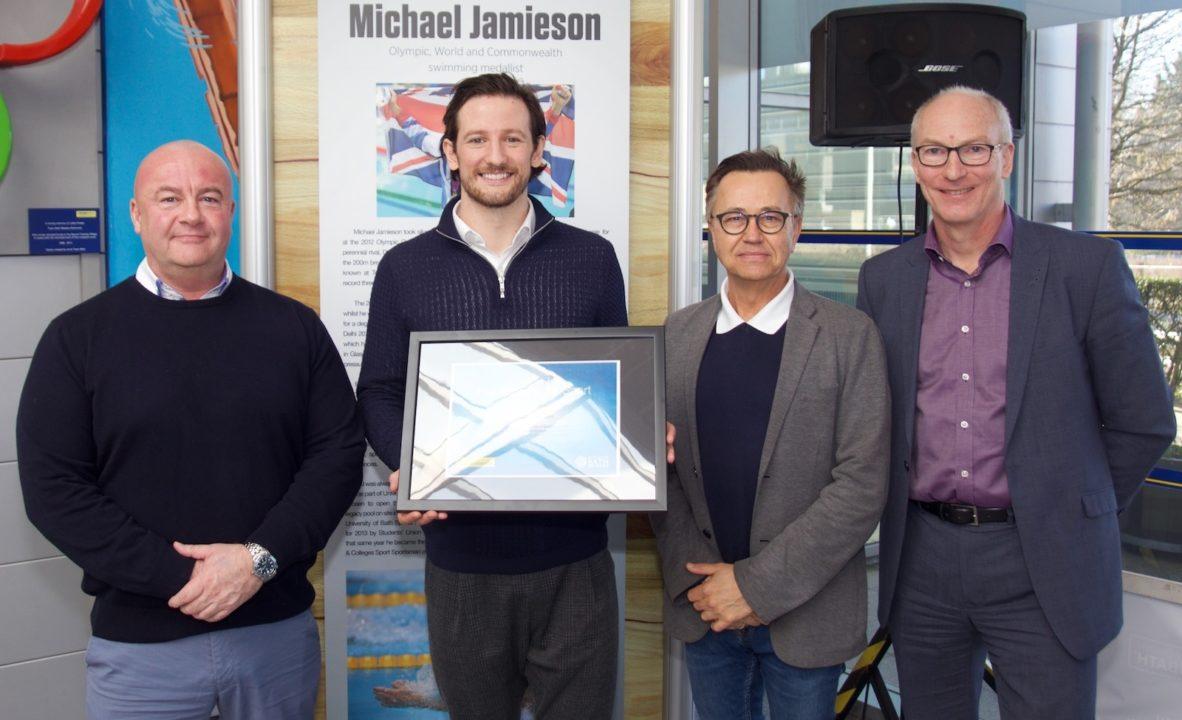 Olympic medalist Michael Jamieson is inducted into the University of Bath Hall of Fame. Read about that and other swimming snippets from around the web in this edition of Beyond the Lane Lines. Current photo via University of Bath

2012 Olympic silver medalist Michael Jamieson of Scotland has been inducted into the University of Bath Hall of Fame for Sport. Jamieson blasted a monster swim behind Daniel Gyurta of Hungary to take 200m breast silver in London and help initiate the overall surge in British breaststroking that’s been threatening the world ever since. In his 6 years as part of the British Swimming National Centre Bath squad, Jamieson earned podium places at the Commonwealth Games, World Championships and Short Course World Championships.

“I have really fond memories of here. I remember coming in 2009 and asking Dave [McNulty] if he would take me into the team because I knew I needed to improve if I wanted to get onto that podium in London.

“Everything that I accomplished here was thanks to Dave and the rest of the team. When I look back now, you realise it was never about the medals – it’s about the way you chase the medals and the relationships you create along the way, and I made friends for life here.”

National Centre Bath Lead Coach David McNulty – who, alongside Graeme Antwistle, coached Jamieson during his time at Bath – attended the Hall of Fame induction along with current members of the swimming squad, including fellow Olympic medallist Siobhan-Marie O’Connor. Jamieson is the fourth swimmer to be welcomed into the University of Bath Hall of Fame for Sport.

Mamaku, near the city of Rotorua in North Island, New Zealand will be getting a new pool, courtesy of a $100,000 grant from the New Zealand Community Trust. This amount is added to another $250,00 that has been raised to plant the pool at Mamaku School to replace an old pool that can no longer be utilized. The total cost of the new pool is expected to be $650,000. The remaining funds needed to complete the project will be raised through applications to other funders, as well as fundraising activities in the local community.

Principal Gary Veysi says, “The old pool is over 60 years old now and was getting too expensive to maintain and run. The school has always been the centre of our rural community, so has the pool, as a great meeting place for family and whānau over the generations. Our students and the wider community can’t wait for the new pool to be completed.”

Mamaku has a population of just over 700 people and does not have bus service into Rotorua. The cost to hire a bus for students to use the Rotorua Aquatic Centre has been too expensive for Mamaku School, meaning students have been missing out on gaining important water safety and swimming skills, reports Devdiscourse.

Former University of North Carolina Wilmington swimming and diving head coach Dave Allen will be inducted into the North Carolina Swimming Hall of Fame next month. Already having been entered into the Potsdam State Athletic Hall of Fame and Greater Wilmington Sports Hall of Fame, Allen is recognized as the founder of UNCW’s program, as well as for being ‘a key contribute in the development of aquatics in the Cape Fear region for nearly 40 years.’

Per UNCW News, Allen coached 44 years at three different institutions and racked up 542 dual meet wins before announcing his retirement from UNCW in 2014.

#4 – Swim England Partners with ‘Everyone Active’

In a bid to create a ‘nation of swimmers’, Swim England has partnered up with leisure operator ‘Everyone Active’ in a 3-year collaboration. The agreement will ‘focus on creating a strategic approach to encourage more people to engage in swimming and to tackle physical activity.’ The goal of the partnership is to achieve 10 million swims at Everyone Active pools by the end of 2019.

The two organizations will work together to research swimming behaviours, as well as work to identify and challenge common misconceptions about swimming.

Lesley Hill, head of strategic partnerships at Swim England, added: “Over the past few years there has been an increase in the variety of activities available in the pool. However, we are still seeing areas of the country where swimming is not regularly enjoyed.

“We want everyone to think of swimming as a fun, healthy activity to enjoy with friends and family. By working with Everyone Active we will be able to engage directly with local swimmers and encourage people to enjoy the water more regularly.”