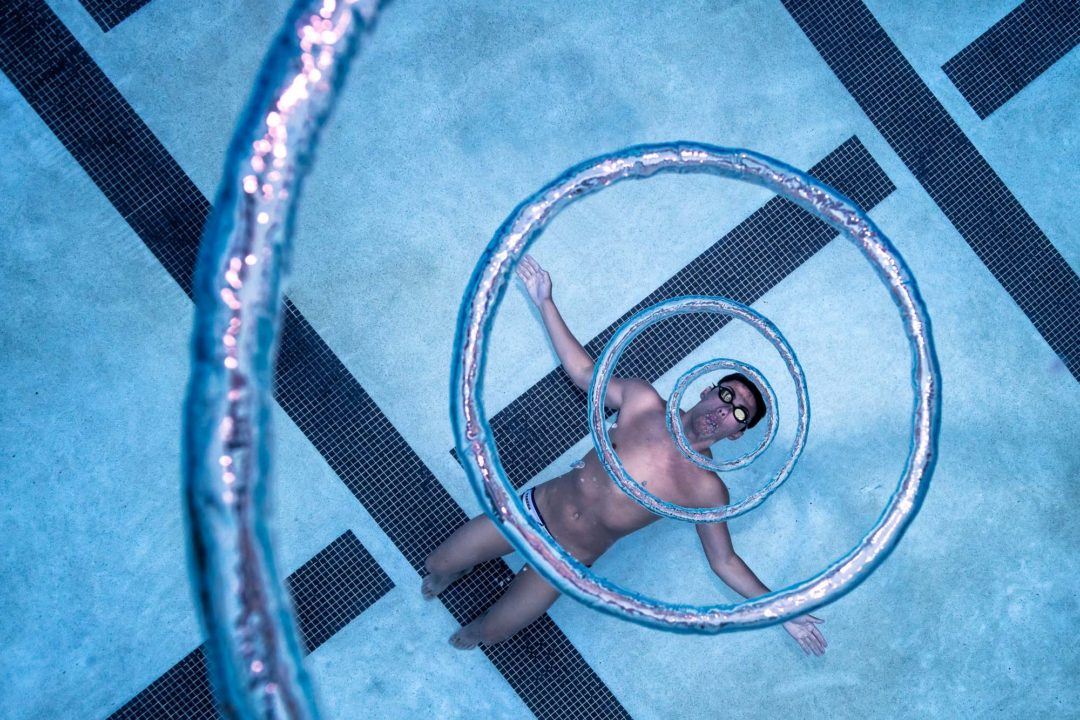 2018 was a truly exciting year in our sport which led to the creation of some interesting imagery. Once again,... Current photo via Mike Lewis/Ola Vista Photography

Night 6 of the US Olympic Trials was filled with emotion and electricity. Here are the top shots from the riveting night of crowning new Tokyo Olympians.

Night 4 of the US Olympic Trials saw many qualify for their first Olympic team as well as some veterans. Here are the top shots from the electric night.

Night 3 of the US Olympic Trials saw many qualify for their first Olympic team as well as some veterans, and the greatest time trial of all time.

US Olympic Swimming Trials continued this morning with many battles for spots in the finals, and Jack Spitser was on deck to capture it all.

US Olympic Swimming Trials continued last night with many battles for the first spots on the US Olympic team, and Jack Spitser was on deck to capture it all.

2018 was a truly exciting year in our sport which led to the creation of some interesting imagery. Once again, we did an end of year sit down with swimming photographer Mike Lewis and mined his photo library for our favorite underwater swimming shots from the past year.  Here’s our compilation of the best underwater swimming photos of 2018. As we did in 2017, we’ve included a bit of backstory for each of the images.

Kathleen Baker spent the summer of 2018 training in La Jolla, California and although she brings the talent of more than one “average” swimmer, this was a composite image made at the La Jolla High School pool prior to the USA Swimming summer nationals (photo: Mike Lewis)

Katie Ledecky training at Stanford University following the 2018 women’s NCAA championship. The sun was at her back which created an interesting light and dark contrast with the shadows. (photo: Mike Lewis)

Jacob Pebley in San Diego, California. It’s always fun experimenting with new backdrops. Got a bunch of cool things coming in 2019 along these lines too (photo: Mike Lewis)

Wang Shun was part of the Chinese national team contingent training at UC San Diego with Coach David Marsh’s elite group. The light from the bottom comes from a mirror that’s used to help the swimmers check their technique. The sun was hitting at the perfect angle for about 5 minutes when this images was made (photo: Mike Lewis)

Simone Manuel gave away a swim lesson to support the ALS foundation. It was an honor to help document the lesson and see the fun that Simone and the lesson participants were having on this day at Stanford (photo: Mike Lewis)

Getting into the halloween vibe with Michael Chadwick in La Jolla this fall (photo: Mike Lewis)

Marc Caron is not only fast, he’s super smart too. After finishing his undergrad at Tampa he enrolled in graduate school at UC San Diego and has one more year of collegiate eligibility so he’ll be racing for the Tritons (photo: Mike Lewis)

Working with kids is always fun. It’s an excellent reminder about why we all swim – “because going to the pool is a blast” (photo: Mike Lewis)

Sarah Sjostrom We made this image in Ft. Lauderdale, Florida last March. Sarah was super fun to work with and I think we were both happy we got to shoot this in the much warmer dive well at the ISHOF pool (photo: Mike Lewis)

Caeleb Dressel We knew the men’s NCAA’s were going to bring out something special from Caeleb – we were so thankful to Coach Troy for letting us in for bit during their early taper phase (photo: Mike Lewis)

Ryan Murphy at U.C. Berkeley – all pro. This was just after Ryan had finished his final semester of school and was beginning his new life as a professional swimmer. I’m always grateful to Coach Durden for letting me get in create with his team. (photo: Mike Lewis)

Kendyl Stewart last May in San Diego. Kendyl is one of the most technically gifted swimmers and her mellow and relaxed demeanor belies her fierce work ethic and competitive drive. (photo: Mike Lewis)

Katie Ledecky training at Stanford University – January 2018. Mostly I’m lost in my work during a photo shoot, but just after Katie passed me, I had one of those swim fan moment: “Wow, I can’t believe that just happened. One of the greatest athletes of all time swam over my head” (photo: Mike Lewis)

2018 Stanford Women’s Swimming – all I can say is this much talent in one place would be intimating if these people weren’t so cool (photo: Mike Lewis)

Caeleb Dressel in the outdoor pool at the University of Florida prior to the 2018 NCAA championships (photo: Mike Lewis)

I really enjoy working with all swimmers. I was honored and stoked to get to work with Megan Weller of Coronado, CA to capture the memories of her senior year of high school swimming. (photo: Mike Lewis)

I had a brief window to work with Caeleb Dressel in the morning before his first taper workout and toward the end of our session Ryan Lochte jumped in tried to photo bomb us and Caeleb just jumped right into his arms. It was cool to see the chemistry between these two Gator legends (photo: Mike Lewis)

Slowing down the shutter with some flash to capture the off the blocks “boom”. (photo: Mike Lewis)

Marius Kusch on one of the Team Elite off days in La Jolla (photo: Mike Lewis)

Ring master. Some people think they are good at bubble rings and Austin Takeda really is (photo: Mike Lewis)

Davis Talyor of the Mission Viejo Nadadores. This was another fun session to mark the completion of Davis’s senior year. Davis is a super courageous and determined swimmer. It’s going to be exciting to follow his swimming during his college years too (photo: Mike Lewis)

Josh Prenot at the Legends pool in Berkeley. Following Josh’s training session we had some time in the facility and without the lane lines we create some fun stuff that looks like swimming out in the open ocean (photo: Mike Lewis)

And rightly so. 🙂 Man is a marvel with a camera.

Swimswam is lucky to work with Mike Lewis. Great photos year after year.