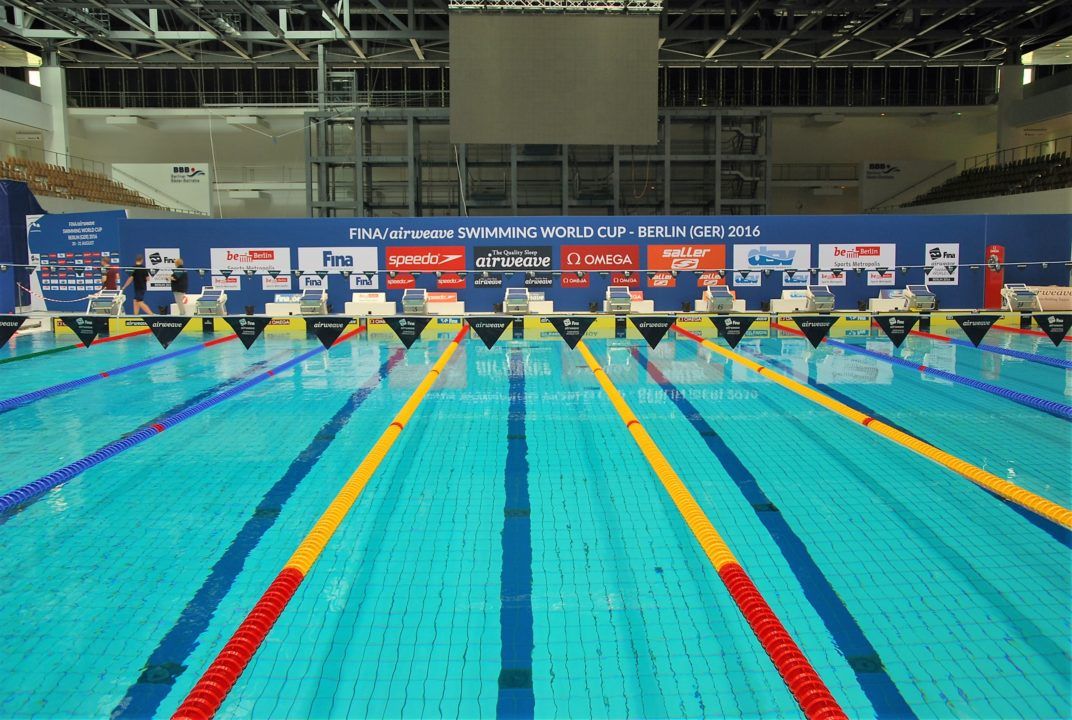 After cutting Berlin from the FINA World Cup Series back in 2018, FINA has reintroduced it into the schedule to replace the recently lost Eindhoven stop. Archive photo via Daniela Kapser

As we reported back in March, the Dutch Swimming Federation announced that they will no longer host one of the stops along the 2019 FINA World Cup Series.

The competition was scheduled to be in Eindhoven from September 27-29th, 2019. Technical director of the KZB André Cats cited issues related to the cost of hosting, the investment into short course meters during an Olympic season, as well as the uncertainty of the future of the FINA World Cup Series alongside the new FINA World Champions series debuting this month.

According to the schedule of the World Cup Series on FINA‘s website, Berlin will now host the second European stop in place of Eindhoven. The meet will be held from October 11th-13th, 2019.

Berlin was a staple location of the FINA World Cup Series until it was cut from the lineup in 2018. Six current short course meters (25m) world records have been established in that pool, from the likes of Katinka Hosszu, Paul Biedermann, Ranomi Kromowidjojo, Cameron Van Der Burgh, and Mireia Belmonte.

The new FINA Championship Series will commence on April 27th in Guangzhou, China. There will be additional stops in both Budapest (May 11th-12th) and Indianapolis (May 31st-June 1st). This new series has the greatest amount of prize money of any FINA event in history, totaling at $4 million. Furthermore, FINA plans to cover the travel costs of the athletes, as well as provide additional prize money for their appearances. Unlike the Champions Series, which is invite-only, the FINA World Cup Series has a much broader set of standards for qualifying.

What are the dates of ISL meets? Thanks. Too much going on in the fall. No time off going into 2020?

Kazan in November? Pretty much like Fargo, ND.
Why does FINA choose Doha so persistently? They cannot gather 8 swimmers finals there. The best place for Hosszu where she demonstrates her ironnism in most impressive way. She swims everything there: final by final without giving time to a few spectators to recover from the shock of outstanding dominance.

“Why does FINA choose Doha so persistently?”

I’ll bet they don’t complain about the cost of hosting !

They need to scrub that pool, can see the algae on the bottom