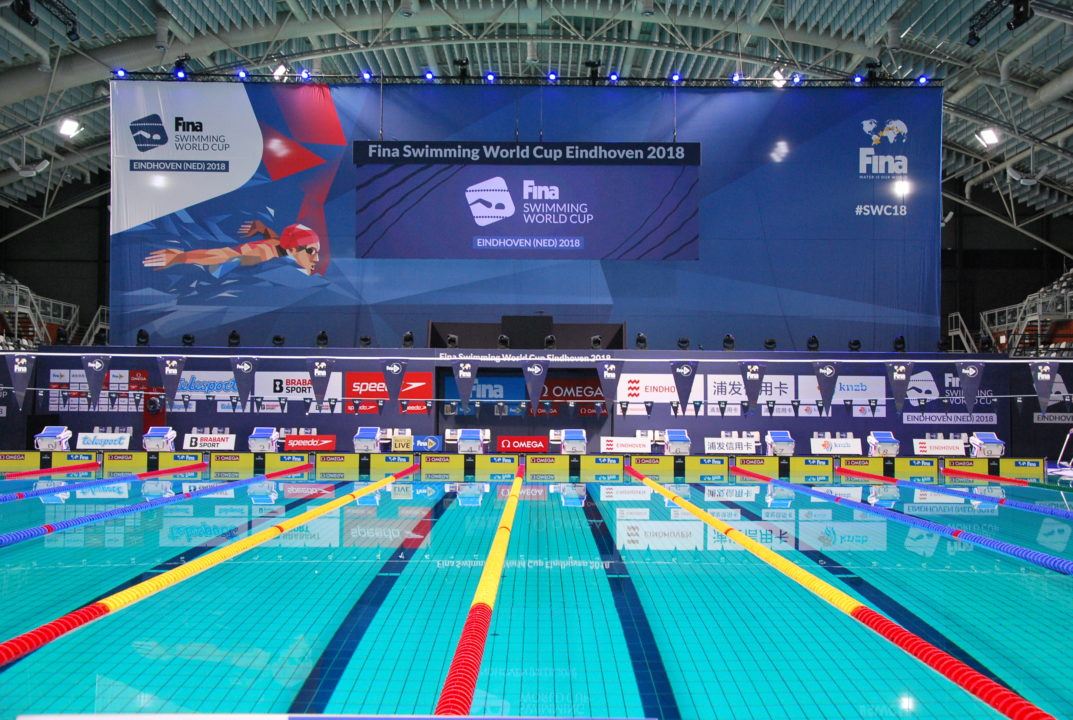 Citing concerns over the cost of the event and athlete interest, the 2019 FINA World Cup stop in Eindhoven has been cancelled. Archive photo via Daniela Kapser

The 2019 FINA World Cup will no longer head to Eindhoven, the Dutch Swimming Federation announced Friday.

“After a thorough evaluation with all parties involved, we have decided to return the organization of the World Cup competition to FINA,” says André Cats, technical director of the KNZB.

The meet was originally scheduled for September 27-29th, 2019, as the fourth stop on the World Cup circuit. The fourth stop is now listed as “TBC” on FINA‘s schedule.

Cats cited the cost of hosting the meet as a factor in canceling, as well as the World Cup series’ nebulous fate with FINA‘s new Champions Series also kicking off this spring. He also mentioned that swimmers have little interested in a short course meters during the Olympic season.

“The organization of a World Cup is a major financial challenge. In addition, the concept of World Cups is under discussion within FINA. The FINA has started the Champions Swim Series, a series of competitions that competes with the World Cups,” Cats said. “This results in an unclear positioning of the World Cups. In addition, it is expected that there will be little interest in a World Cup short course in an Olympic swimming season. All this made us decide not to do it.”

The series kicks off in Asia with stops in Tokyo, Bejing and Singapore. It was then supposed to head to Europe for stops in Eindhoven and Budapest, and then go to Kazan and Doha.

FINA‘s Champions Series begins next month in Guanzhou, then heads to Budapest and Indianapolis in May and early June. The new series pays out $4 million in prize money, making it the richest swimming event in the organization’s history (last year’s World Cup was expected to give out just over $2.5 million). FINA will also cover athletes’ travel costs and provide them with appearance money for the Champion Series.