Bentz, Hu in multiple A finals after prelims of NCSA Juniors day 3 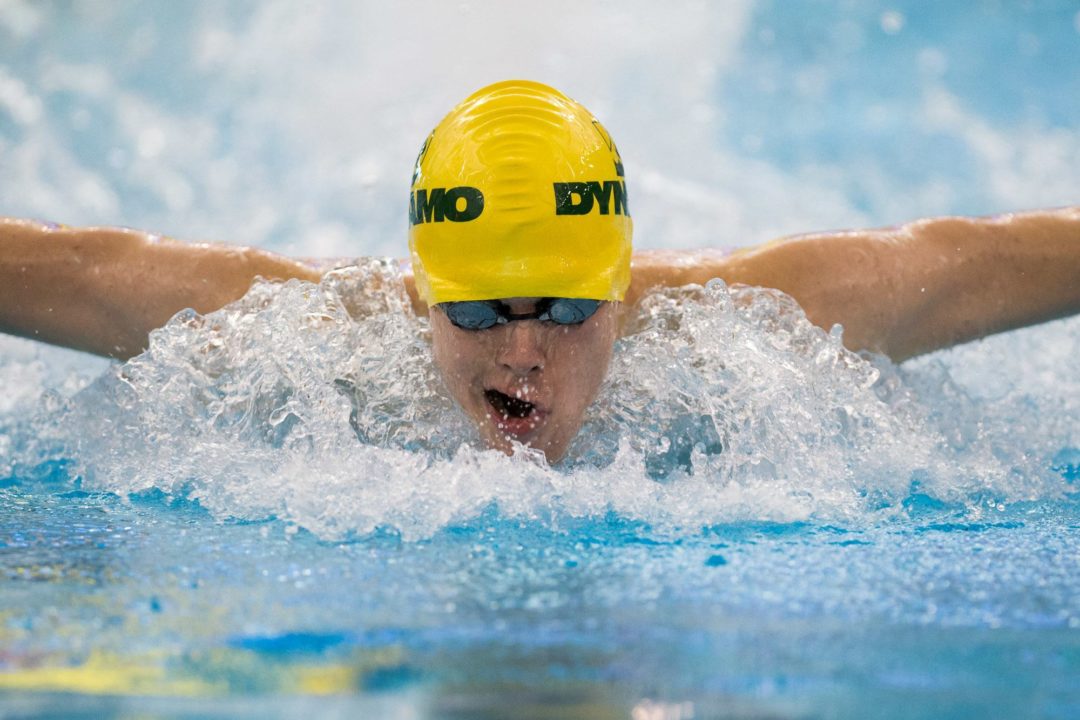 Gunnar Bentz has arrived at NCSA Junior Nationals, and he hold a pair of top-2 seeds. Janet Hu, Simone Manuel and Francis Haas all look primed to repeat after night 2 wins. Archive photo via Tim Binning/TheSwimPictures.com

The usual suspects were back in action in Orlando, opening up prelims of day 3 at the NCSA Junior National meet. Simone Manuel, Francis Haas and Janet Hu all took top seeds after big wins last night. In addition, Gunnar Bentz has arrived for Dynamo and sits atop the 400 IM standings.

Simone Manuel opened things up with the top seed in the 200 free. Her 1:45.52 won’t quite grab headlines the way her 100 free last night did, but it’s still fastest of the field by over a second. Manuel was still a ways off her lifetime-best, but after the way she crushed finals last night, you definitely can’t rule out a big finals swim from the First Colony 17-year-old.

The boys 200 free has potential for another repeat winner. 500 free champ Francis Haas is the top seed in 1:36.83 – that’s a lifetime-best by just .01. Haas will look to take more off his PR tonight against Nicholas Arakelian, who finished second to him in the 500. Arakelian, out of Kingfish Aquatic Club in Michigan, was 1:37.38 for second. Liam Egan is the third seed in 1:37.73, just ahead of last night’s 200 back champ Tristan Sanders, who went 1:37.81 for Palm Harbor YMCA.

In the girls 50 breast, it was New Trier’s Ingrid Wall who will come in with the top seed, but not by much. Wall went 28.63, just .02 ahead of last night’s 100 breast winner Samantha Senczyszyn of Ozaukee Aquatics. And just a few hundredths back of her was Aquajets breaststroker Olivia Anderson in 28.69. Behind that trio is last night’s NAG record-breaker Alexis Wenger of Grosse Point, who went 28.81.

The 400 IM is set up for another close field, although there’s definitely some prelims gamesmanship going on in that race. Mia Nonnenberg went a lifetime-best 4:14.12 to take the top seed. Just a half-second back is Ozaukee’s Katherine Drabot in her second “A” final of the day. Drabot was 4:14.67 with Dynamo’s Kylie Stewart third in 4:14.82. Another well-known name in the A final is 14-year-old Isabella Rongione, who dropped over 3 seconds to take 6th in 4:16.56.

Gunner Bentz made his debut at this year’s NCSAs in the 400 IM and it was a good one. The Dynamo swimmer went 3:47.78 to head into tonight seeded first. Baylor’s Sam McHugh sits second in 3:50.95. Those two should have potential to run away from the pack tonight, but the battle behind them is set up well too. A foursome of boys went 3:52 this morning for the next four seeds: Alex Lebed, Justin Edwards, Jae Park and Tomas Peribonio.

Baylor’s Luke Kaliszak rolled to the top seed in the boys 50 fly, going 21.44. Second is Gunnar Bentz, coming off of that 400 IM right before, and Michael Andrew sits behind them. Bentz was 21.58 and Andrew went 21.83. Also under 22 were Delta’s Steven Tan and Justin Plaschka of Team Suffolk.

Yes. He looks so tall in the water.
The 25 yard pool is too short for him.

He’s a long course swimmer and it’s a good thing for his international future.
What a talent!