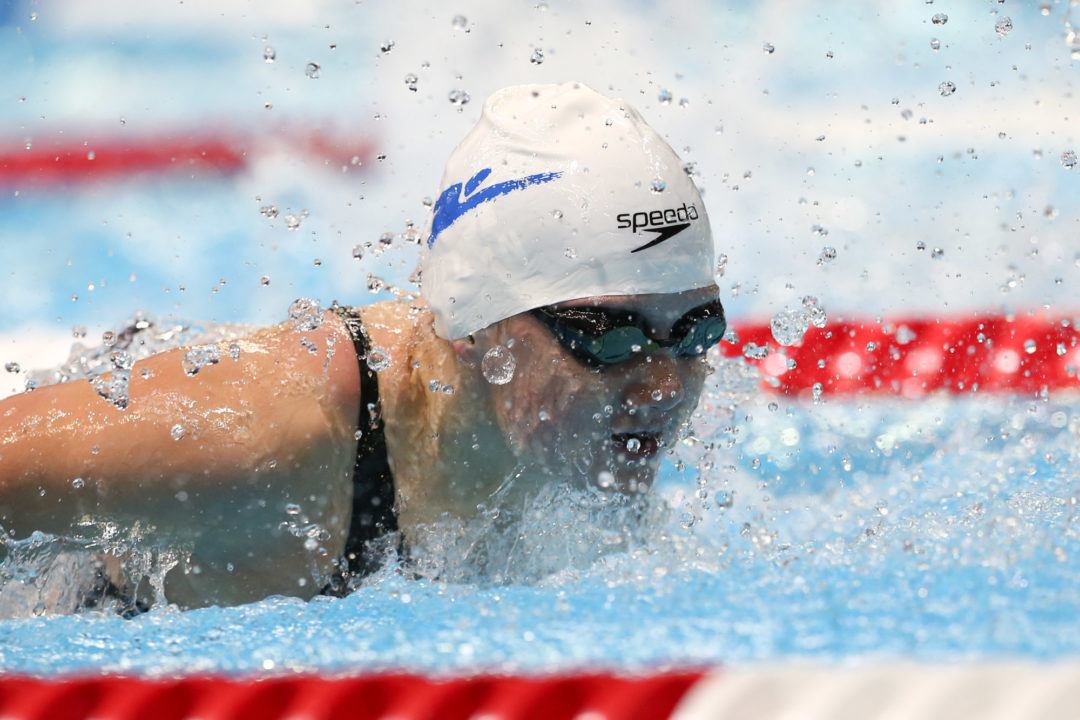 Bartel broke the state 100 breaststroke record twice in two days, destroying her own 1:01.88 to 1:00.39 in prelims, and then lowering it even further to 1:00.22 in finals. (Second in the event went to another Fossil Ridge swimmer, freshman Caraline Baker with 1:02.94). Bartel also nabbed an individual title in the 200 IM (1:59.48). Given the high school line-up, Bartel didn’t even have the chance to swim her signature event, the 200 breaststroke, where she recently took down Caitlyn Leverenz‘s NAG record from back in 2007.

Meanwhile, her teammate Gillilan set an individual record of her own in the 100 fly. In prelims, she matched the state record 53.22 set by current Auburn swimmer Bailey Nero in 2015, and then Gillilan shaved down to 53.15 in finals to get the mark.

The duo also teamed up with juniors Bailey Stewart and Kylee Alons to take the state record in the 200 medley relay, clocking 1:39.40. Fossil Ridge proved dominant in the relays. The team of Indiana commit Bailey Kovac, Andrea Niemann, Cameron Kovac, and Gillilan clocked 1:35.02 to win the 200 free relay. To round out the relay victories, Bartel, Madeleine Mason, Stewart, and Alons came within just .03 seconds of a Missy Franklin-era Colorado State record. Fossil Ridge’s 3:22.45 just missed the 3:22.42 set by Regis Jesuit in 2011. But, given that the whole 400 free relay was made up of juniors, Fossil Ridge will have another chance next year.

“We all work our butts off, it’s so good to see our hard work pay off,” Gillian told Cannon Casey of the CHSAA. “I just try to have fun; when you have fun swimming it’s so much easier. As a team, we’re so close together, so when one person does well, you gotta do your work. It all clicks together.”

Diver Lexie Barker grabbed Douglass County’s sole win of the meet, with 493.25 to take the state title in the 1 meter.

“Every year I’ve worked my way up in the placing just a little bit more,” Barker said to Casey. It feels good to finally get first. It was very stressful coming up to this because I did really well all season.”

Zoe Bartel next dominant US female breaststroker at the international level. Especially in the 200.

Will be interesting to see how she progresses into her senior year as her club coach just announced his departure. Her effort and success at the National Junior level and Junior Pan Pacs is impressive to date!

Yes. Tough week for all the Fossil Girls with the announcement this week that their club coach will leave in March. They did fabulous under the circumstances. Proud of them!