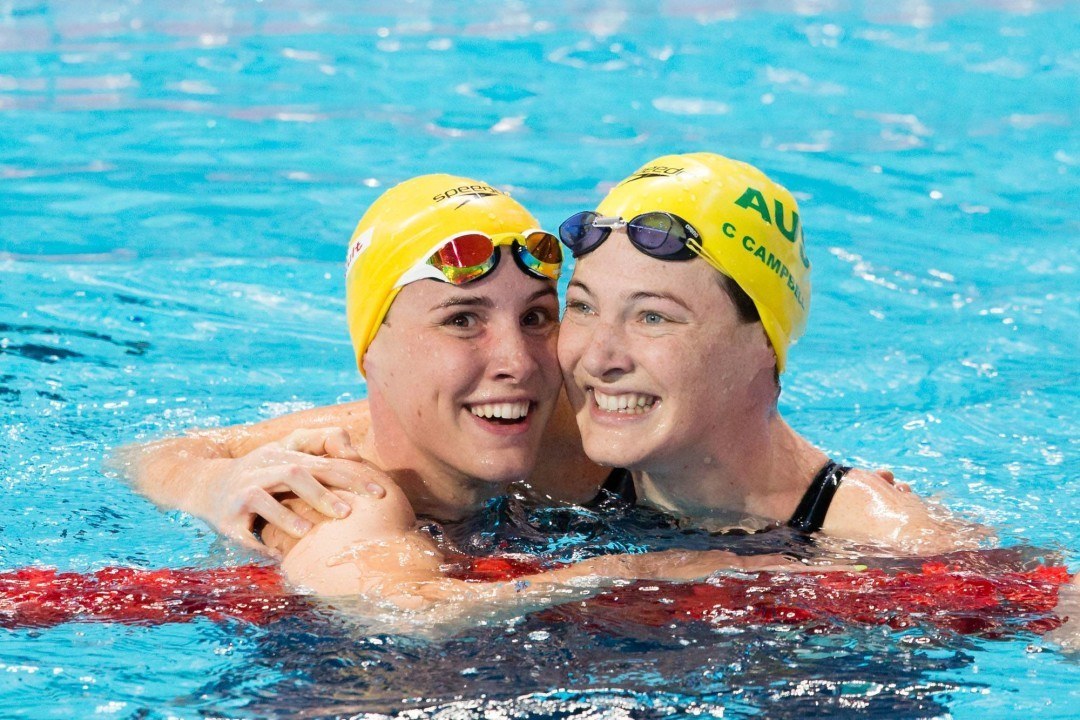 The Australian team, anchored by the Campbell sisters took down the world record in tonight's 4 x 100 free relay. Current photo via Tim Binning/TheSwimPictures.com

Gough is one of Australia’s newest Olympic qualifiers for 2021 and added her name to the team in Australian record fashion.

Stubblety-Cook has booked a spot on his first-ever Olympic squad by swimming under the Australian record in the 200 breast.

Let’s see what King Kyle has in store for the men’s 100m free prelim on day 4 of the 2021 Australian Olympic Swimming Trials.

The Australian women crushed their own 4 x 100 free relay world record tonight, winning the gold medal in a 3:30.65.

The Campbell sisters led the way, with anchor Cate splitting 51.97, and third leg Bronte splitting 52.15, both faster than anyone in the field.

The Australians have held the world record in the 4×100 free since 2014, when they took down the 3:31.72 set by the Netherlands at the 2009 World Championships in Rome. Three of the four team members from tonight were also on the previous world record relay: Cate Campbell, Bronte Campbell, and Emma McKeon. Below see the world record split progression:

The Australian team came in a full second ahead over the second-place Americans and nearly two ahead of the third-place Canadians.

Cate and Bronte will both take on the 100 free later this week, where they come in heavy favorites to both medal, if not to sweep first and second.

Here, you can see a deeper split analysis:

Anyone know how the decision was made to have Vollmer swim tonight and leave Allison or whoever was #5? what were splits?

It had nothing to do with medals. see above

They had to include Vollmer because she was entered as a relay swimmer so if they didn’t swim her, the whole relay would be disqualified. Anyway, she outsplit everyone from the morning except for Ledecky

I don’t believe so – my understanding is that everyone on your roster must swim an event, but Vollmer was not a relay-only qualifier.

Weir (53.60 leadoff in prelims) or Vollmer (53.59 season best) would pretty much be a wash. I might have gone with weir, but I think when the coaches can help a swimmer get an extra medal they probably will

I think it was impossible for the US to win anyway. So the decision to have Vollmer swim so that she could also medal. Everyone won the silver medal! Win-win

What was USA splits