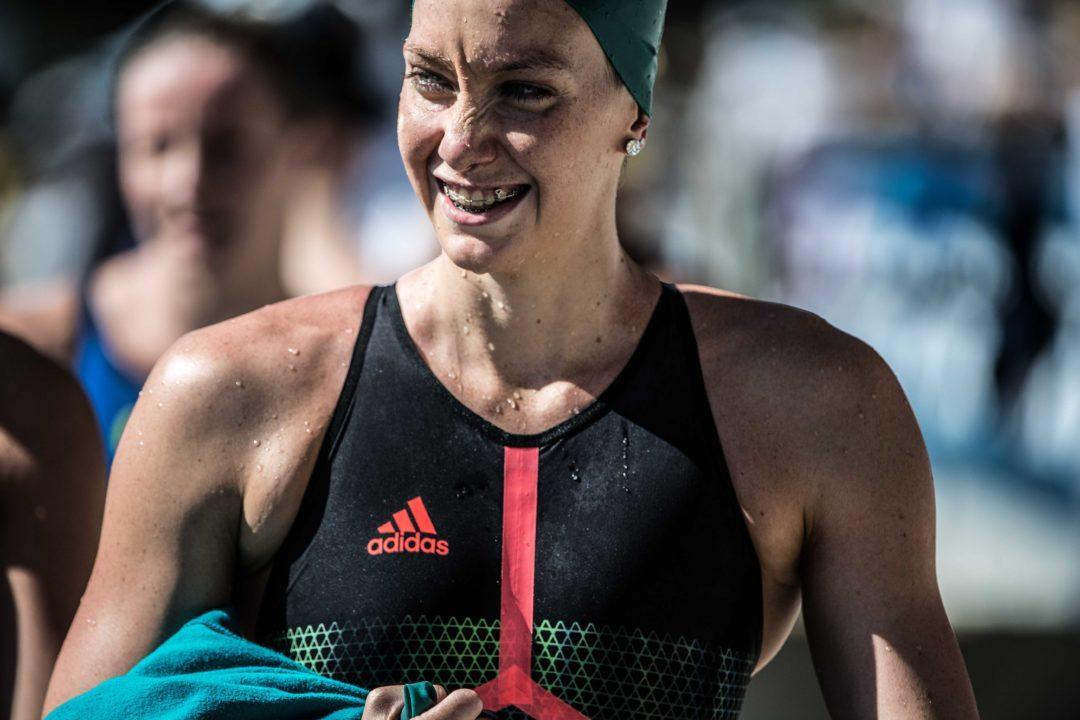 Olympian Madi Wilson will be playing a different role on the Aussie World Championships team this time around than back in 2015. Archive photo via Mike Lewis/Ola Vista Photography

Olympian Madi Wilson may not be swimming her signature backstroke in Budapest this week, but the 23-year-old Aussie is ready to make an impact in freestyle as a member of her nation’s 4x100m and 4x200m relays. Having finished a disappointing 7th in the 100m backstroke at the Aussie National Championships this past April, her nation’s qualifying meet for Worlds, Wilson did surprise the field with a 5th place 100m free time of 54.33 and a 5th place 200m free time of 1:58.40, the latter of which was among her best-ever.

Wilson followed that meet up with a 2nd place finish in the 200m freestyle at the Mare Nostrum Monaco stop in June, clocking a lifetime best of 1:57.97 in the event. To what can the Dolphins national team member attribute her recent surge in freestyle? Wilson gives a lot of credit to her new coach at Bond, Richard Scarce, the mentor to whom she turned in May of this year.

“I’ve been doing a little bit of backstroke but mostly freestyle to get prepared for the relays as best I can and I’ve surprised myself a lot at training and I’ve done some huge PBs over here,” she told The Gold Coast Bulletin.

“Rich has got so many great freestylers. He’s got Cam (McEvoy) who is the best non-textile suit freestyler in the world, so for me, it was a no-brainer to listen to what his technique changes were to apply them to my stroke. I trust Rich and it’s obviously paid off, so I was very open to any changes he suggested.”

At the 2015 World Championships, Wilson notched an individual silver medal in the 100m backstroke and made the final in the event at the 2016 Olympic Games. Something didn’t go according to plan in Rio, however, as Wilson ultimately finished 8th, well off the Olympic podium.

“I had a lot of pressure going into the Olympics, I was ranked second in the world, so coming out of the Olympics I had a think about what I wanted to do this year in the first year of an Olympic cycle,” she said.

“I thought that (I wanted) just to try and take the pressure off myself a little bit and enjoy this year a bit more because I definitely want to go another four years and I want to still stay on the team and travel with the team and race. So being in relays is the best outcome for me.”

The women’s 4x100m freestyle relay event begins on July 23rd in Budapest, while the 4x200m event kicks-off on July 27th.