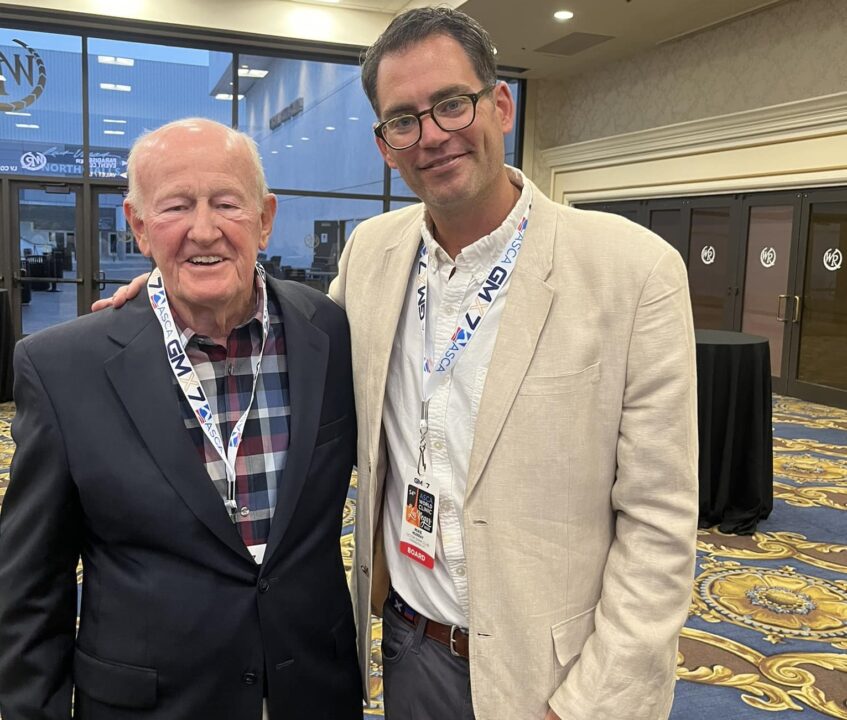 Legendary distance coach Jack Simon has founded a new prize that will be paid out to American club coaches who can get their swimmers within 1% of a World Record in the 1500 free. Current photo via Mike Murray

American distance swimming is on the rise, with Katie Ledecky returning the luster to the event in the U.S. and Bobby Finke leading a men’s return to international podiums as well.

The idea is simple: if a club coach can get a swimmer within 1% of the World Record in the men’s or women’s 1500-meter freestyle, they will receive a cash prize.

Simon says the idea formed in the late 1980s via conversations with fellow Hall of Fame swim coach Don Talbot.

“We used to have long conversations about the future of the sport,” Simon told SwimSwam.

“I think it was somewhere back around 88 89 that we both discovered aerobic training and the growing lack of it in the US and Australia. That led from there to future conversations and keeping my eyes open.

Simon says that sometime in the late 1990s, he started discussing the idea with then-ASCA CEO John Leonard.

While Leonard has been famously and publicly critical of the most sprint-based training methodology, USRPT, Simon was careful to point out that he is not being critical of anybody’s training style.

Instead, he’s trying to encourage a version of “low threshold, low intensity” training that he believes will help revive American distance swimming.

“I honestly believe so many coaches have forgotten what real work is, and a lot of them don’t want to put the time in,” Simon said. “It takes time to produce good aerobic training. Low threshold, low intensity training…this is my belief and it’s based on about 60 years of experience.”

He acknowledged that there’s more than one way to coach fast swimmers, and the award does not contain a restriction on the type of training.

Simon recalled a set in the mid-1970s where he was training 11 teenagers, nine of whom were in high school and two of whom were freshmen in college (Olympic medalists Mike Bruner and Tim Shaw).

He pointed out that in 1976, all three Americans to represent the US at the Olympic Games in the men’s 1500 were high school students – which is who the award is designed to incentivize.

In 1976, the US sent Brian Goodell, Bobby Hackett, and Paul Hartloff to the Olympics in the men’s 1500 freestyle. They finished 1st, 2nd, and 7th, respectively, in that race.

There are certain restrictions on the award. One of the big ones is that the swimmer’s coach must have been their coach-of-record, or the head coach of the program where the qualifying swimmer trains, for at least three years preceding the swim (continuously).

He says the idea is to develop club swimming. “Those clubs will have lots of resources that a small club in the Midwest won’t have,” Simon said.

There are a few other restrictions. The swimmer must be eligible to represent the U.S. The coach doesn’t have to be an American citizen, but has to be a member in good standing of USA Swimming and a current member of ASCA.

The time threshold is calculated based on the World Record as of August 31 at the end of the season. So if the World Record is broken during the season, the goalpost can move. A swimmer can earn the award for their coach once per year, but in subsequent years, they must have been faster than their previous time.

In addition to a physical award recognizing the achievement, the honor comes with a cash prize for the coach-of-record.

Simon’s original donation amount to establish the endowment was $3,500. Simon says that will grow over time, “depending on the markets,” and that after his passing it would become a “substantial amount.”

He hopes that others will contribute to the endowment too in order to see the incentive increase.

The amount of the award is calculated as follows:

Leaving a small portion of the interest in the fund will allow it to grow, as will the fact that Simon doesn’t expect that it will be given every year. If nobody earns the award in 10 years, for example, the pool will have ballooned to almost $6,300, assuming a 6% interest rate, even without any additional contributions.

They’re tough, especially on the women’s side, thanks to the singular star that is Katie Ledecky.

Katie Ledecky has set a very high bar for women’s swimming. In order for an American swimmer to earn this award for their coach, they would have to become the second-best swimmer in history by nine seconds. Besides Ledecky, the next-fastest swimmer ever in the event is Denmark’s Lotte Friis, who swam 15:38.88 in 2013. And they would have to do it before going to college.

Interestingly, Ledecky is the most recent American who would have earned this award: she broke the World Record while still training with club team NCAP. Because of the three-year rule, though, neither Bruce Gemmell (her coach-of-record when she set her first five 1500 World Records) or Yuri Suguiyama (her coach-of-record when she rose to prominence and won her first Olympic gold) would be eligible to receive the award.

At the time, the 1500 free was not an Olympic event for women.

Ron Aitken, head coach of the Sandpipers of Nevada, seems like the most-likely candidate to earn this award in the near-term. His is currently the most-successful club team for distance training in the country.

16-year-old Katie Grimes won a silver medal in the 1500 free at the 2022 World Championships in 15:44.89. That time is still 15 seconds away from the threshold for the award, however. She is a current high school junior, and so has a season-and-a-half (presuming both she and Aitken stay with Sandpipers) before she’s scheduled to head to the University of Florida.

Alec Enyeart swam 15:05.10 at the 2022 summer NCSA Junior Championships, which is the best time by a junior in the last few years. He trained at the time with the Tsunami Swim Team in Kansas City, and is now a freshman at the University of Texas. That time is 25+ seconds away from the threshold.

The hill to climb is very tall. Cultural changes, financial changes (pool time), and (according to some sports scientists) physiological changes have made it harder for young distance swimmers to peak in their mid-teens like they used to. Even ASCA‘s new president Mike Murray, one of the most vocal supporters of the type of training Simon is encouraging, has recently shifted his philosophy, at least for a portion of his group.

But Simon believes that the goals are still possible.

A video announcing the new award is below.

I get that Mike Murray is the pres of ASCA but Jesus, how can he be the reference for being vocal about distance/aerobic training? Plenty of coaches in every LSC still run this type of training and probably have kids who can run 15×100 @ 1:05 LCM as referenced in the article. There are still programs who run the “minute man” set, etc. Make that and 1:05 LCM is manageable. A cursory review of results of the mile from something like NCSA Jrs would provide a list of coaches who likely develop this type of training more than what is happening in upstate New York.

1) he has the biggest platform
2) he’s the president of the organization that is going to administer the program
3) he’s the one coach of that group (at least who will publicly admit) who is running an A-B test on that training versus a more modern speed-based training.

Nobody ever said he’s the only example. He’s just the most relevant example to this story.

Sure, we could make a list of “who is doing this kind of training,” but then I’d have 1,400 emails from coaches who either think they should have been, or shouldn’t have been, included on the list.

The man is right.

Is Katie Grimes going to UF?!?!

I don’t think she’s announced anything. So either Braden knows something we don’t or he’s assuming what we’re all assuming 🙂