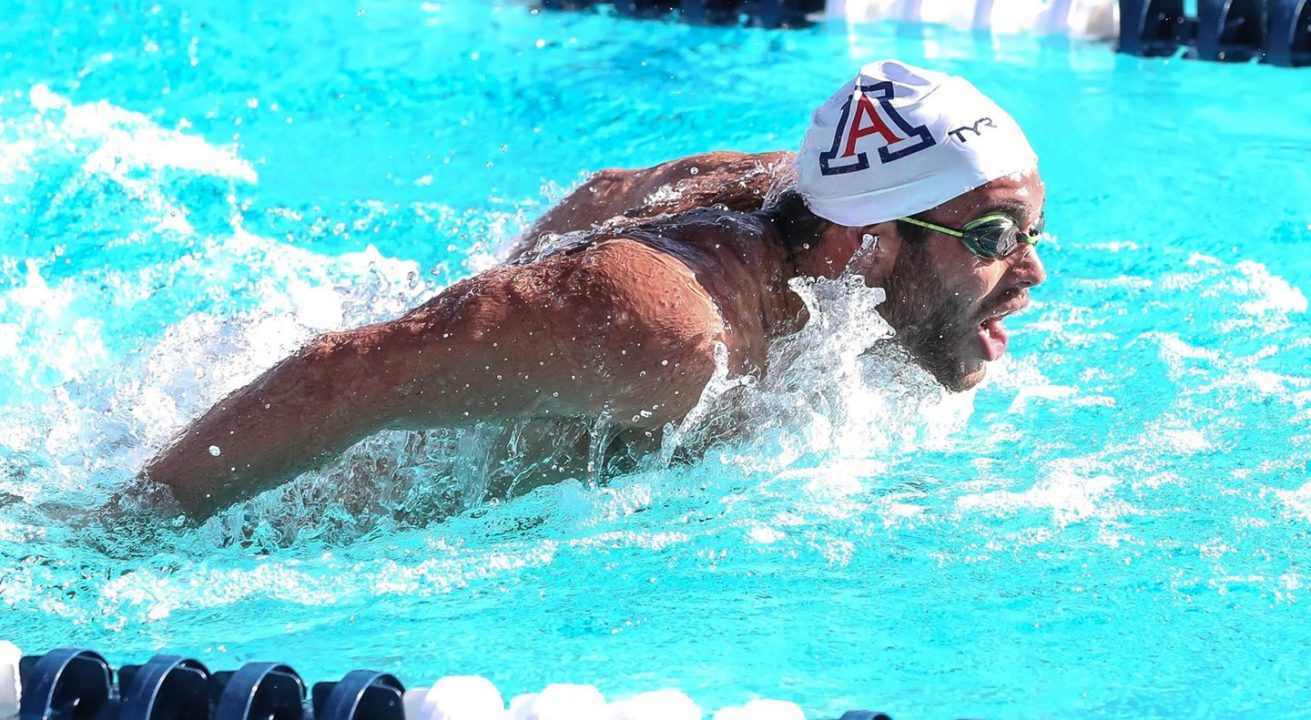 The Arizona Swimming and Diving team took care of business this weekend while both the men and women swept Denver and Hawaii. Current photo via Mike Mattina, Arizona Athletics

On Friday, junior Brooks Fail tallied the first win of the meet for the Wildcats in the 1650 yard Free, and would also go on to win the 200 yard Fly.

Aria Bernal followed up Fail with a win of her own in the Women’s 100 yard Back. While Hannah Cox picked up where she left off in Utah, taking home first place honors in the 200 yard IM.

On Friday, Ellie Jew picked up her first collegiate win in the women’s 100 yard Back while Bjorn Markentin continued to impress, placing 2nd in the men’s 1-meter dive.

TUCSON – The University of Denver men’s and women’s swimming and diving programs combined for eight event wins in a two day double dual on Friday and Saturday at the Hillenbrand Aquatic Center.

Junior Cameron Auchinachie (Binghamton, N.Y.) earned Denver’s first NCAA B Standard of the season, and as of Saturday afternoon ranks first in the country in the 50 free after his 19.76 in the event.

For the Denver men, Colin Gilbert (Kamloops, B.C.) and Riley Babson (Vail, Ariz.) were the first individuals to earn podium finishes, taking second (15:57.27) and third (16:06.36) respectively in the men’s mile race. Gilbert climbed back into a podium position later on Friday afternoon, taking third in the 200 fly with a time of 1:52.50.

Vu turned in another podium swim a few events later with a third place finish in the 100 breast on Friday, reaching the wall in 1:03.60.

Cronin continued her impressive start to the season as the two-time Summit League Women’s Swimmer of the Week finished first in the 200 fly for her second event win of the opening day of the double dual, out-swimming the field by nearly a second with her 2:02.53.

Melissa Funes (Seattle, Wash.) turned in another fast swim in her freshman season, clocking in at 52.25 to take third in the 100 free.

The Pioneers opened the second day of competition against Hawai’i and Arizona with a victory in the women’s 200 medley relay. Arky, Vu, Cronin and Valette won their second medley race of the weekend, combining for a 1:42.14.

Gilbert followed the medley races up with another second place finish in a distance race, finishing the 500 free in 4:32.53. Babson finished third for the second-consecutive afternoon with a 4:37.76.

Cronin capped off a weekend sweep of the women’s butterfly races with her 54.85 in the 100 on Saturday. Valette finished in a tie for second in the race with a 54.97.

Charlotte Simon (Saint Remy, France) earned her first win of the weekend, taking the 200 breast title with a 2:18.12. Adriel Sanes (Rosharon, Texas) got Denver’s men back in the podium places in the 200 breast, finishing second with a 2:01.70.

Valette won the women’s 50 free in 23.35 before Auchinachie earned the first NCAA B Standard of the season with his 19.76 on the men’s side.

UP NEXT: Denver will not compete again as a team until heading to the Princeton Invite in December for a three-day event from the sixth to the eighth.

UH totaled 11 first-place finishes between Friday and Saturday events. The ‘Bows will return to the island of O’ahu for the Sunshine Diving Invitational and the Hawai’i Senior Meet scheduled for Saturday, Nov. 9th. The next road trip is a month away with the three-day Art Adamson Invitational at Texas A&M in late November.

The swimming portion of the UH team took first place in four of the six top finishes. The men’s side claimed three while senior Phoebe Hines claimed a first-place finish for the women’s team.

Hines finished at No. 1 in the 1650 free with a time of 16:42.13; her early season time ranks second in the country for the fastest time in the event.

A point of emphasis for head coach Elliot Ptasnik was the relay events, and the men’s 400 medley relay did not disappoint. Junior ‘aukai Liluikis teamed up with a trio of seniors in Mateusz Chaba, Kāne Follows, and Olli Kokko to finish with a time of 3:15.56. Ranking No. 2 in the nation thus far in the event.

The other two first-place spots went to Follows and Kokko. Follows touched the wall at 49.43 in the 100 backstroke, while Kokko finished at 54.64 in the 100 breaststroke. In the same event with Kokko, finishing at No. 2 and No. 3 was senior David Springhetti and junior Micah Masei.

For the second consecutive day, a men’s relay team shined as UH claimed victory in the 200-medley relay with a time of 1:28.68. The team consisted of three of the four student-athletes from yesterday’s 400-medley relay with Kokko and Chaba, along with Follows. Joining the trio was junior Adam Franz.

Franz and Chaba teamed up with Masei and Lileikis in the 200 free relay finishing at No. 2 but currently sit at No. 8 nationally in the event with a time 1:21.15.

Kokko, Follows, and Lileikis each added solo wins on the day. Kokko in the 200 breaststroke, Follows in the 200 backstroke, and Likeikis in the 100 butterfly.

On the women’s side, senior Phoebe Hines turned in the best day overall, narrowly missing a first-place finish in three events. Hines finished at No. 2 in both the 500 free and the 200 free. She was also a part of the second-place 400 free relay squad with a trio of juniors in Karolina Hajkova, Lucia Lassman, and Anna Kotonen.

A familiar scenario for UH was the placement of the diving standings as head coach Mike Brown and assistant head coach Anita Rossing saw their divers take first place in both events of the day.

Junior Ivy Davis registered a final score of 276.50 in three-meter, while fellow junior Victoria Moretti came in at No. 3 in the event with a final tally of 253. 55.

On the men’s side, sophomore Max Burman finished with a score of 321.05 in the one-meter.