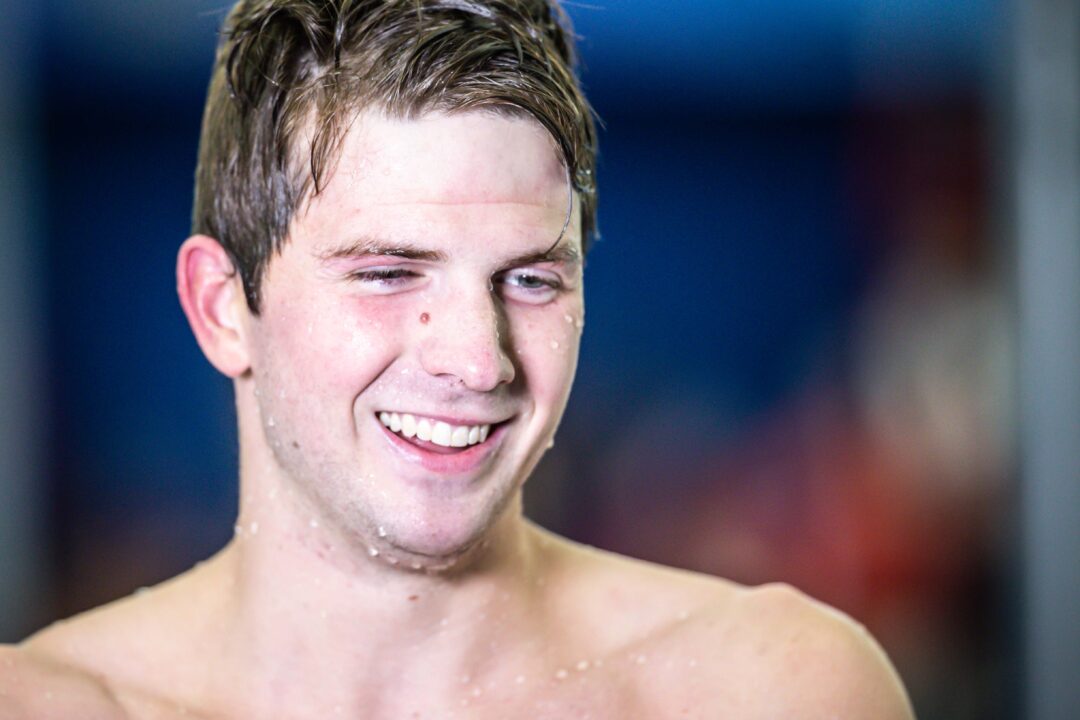 After nearly getting a best time on the first 100, Swanson held on and tied for the win in the men's 200 breast, qualifying for his first World Championships. Current photo via Jack Spitser/Spitser Photography

The narrative surrounding the men’s 200 breaststroke entering the 2022 U.S. International Team Trials was that it was entering a new era of sorts, as several established contenders from years past wouldn’t be suiting up in Greensboro.

The event had been dominated by Josh Prenot, Kevin Cordes and Nic Fink domestically in recent years, and with Fink the only one of three entered to race at Trials, the second spot in the event for the World Championships was very much up for grabs.

Will Licon, who had been as fast as 2:07-mid in 2019, was very much the favorite to join Fink in the event in Budapest, especially after we learned that names like Daniel Roy and Matt Fallon wouldn’t be competing.

But in the final in Greensboro, it was another swimmer, Charlie Swanson who took full advantage of the opportunity and executed a gutsy race en route to qualifying for his first World Championship team.

Swanson, a University of Michigan grad who won gold in the 400 IM at the 2019 Pan Am Games, had missed the final (ninth) of the 200 breast at the 2021 U.S. Olympic Trials, but did pick up some momentum later in the summer as he won he event in a best time of 2:09.85 at the U.S. Summer Championships – East in August (which also happened to be in Greensboro).

Since then, the 24-year-old made the move to Austin, joining Eddie Reese and the University of Texas pro group back in October, and clearly, the training is working.

After nearing that previous lifetime best in the prelims at Trials, clocking 2:10.07 for the second seed behind Texas’ Jake Foster, Swanson went out aggressively in the final.

Swanson maintained an advantage of two-tenths on Foster at the final turn, and then it was Fink who really turned on the jets, upping his stroke rate as he began to run down Swanson and Foster.

Swanson hung tough, matching Fink at the wall in a time of 2:08.84 as the two tied for the win.

Swanson dropped more than a second from his best time, and with the tie, solidified his spot on the World Championship team this summer. Previously the 18th-fastest American of all-time in the event, Swanson now sits eighth.

After the race, Swanson added that he was “a little surprised” by his performance, and considers himself to be more of a 400 IMer.

He also touched on his race strategy: “I knew I had to go out the first 100 and just kind of hold on. I was giving everything I had the last 50.”

You can watch the race and he and Fink’s interview below: