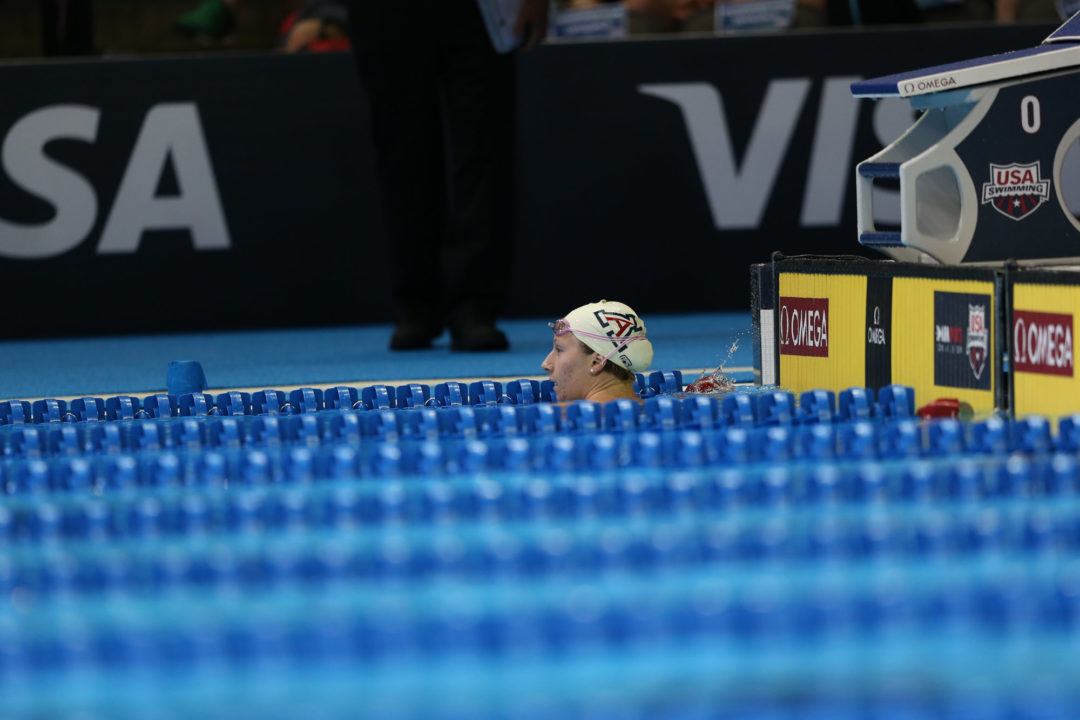 Wednesday, Arizona men’s and women’s 200 medley relays put down electrifying times, with the women posting a 1:34.63 for a... Archive photo via Tim Binning/TheSwimPictures.com

Wednesday, Arizona men’s and women’s 200 medley relays put down electrifying times, with the women posting a 1:34.63 for a new program record. The Wildcat women placed 6th last year at NCAAs, though the time they went two days ago would’ve beaten a stellar Stanford team for the national title. Each of the four legs of this relay put forth admirable efforts, but the key leg came down to one swimmer– sophomore Annie Ochitwa.

Swimming the butterfly leg, Ochitwa slammed down a 22.23, making her the 2nd fastest performer in history. To our knowledge, the only person to have ever gone faster than that was 100y fly American record holder Kelsi Worrell, who split a 21.96 at the 2015 NCAA Championships. Worrell also split a 22.07 and a 22.21 while at Louisville, making Ochitwa’s 22.23 the fourth fastest split ever.

Texas A&M’s Béryl Gastaldello threw down a 22.46 split in 2015, which led to some investigating and analysis back then. Below is a list of what we THINK are the fastest 50y fly splits in history– we’re not perfect, however, so please let us know if you can find a certain split that would make this list!

**Breeden split this on a Stanford relay at Pac-10’s that was actually disqualified. It’s unclear what the DQ was for, or if anyone jumped early (the usual culprit for a relay DQ), and since the relay was DQ’d, her time is somewhat invalid. But, if she didn’t jump, that’s still a legitimate split on its own, without considering the relay.

For those who aren’t yet familiar with Ochitwa, perhaps it’s time to get to know her. She actually broke Natalie Coughlin’s 17-18 NAG record in the 100 fly when she won the 100 fly B final at NCAA’s (51.02) last season, and her time would’ve been 4th in the A final. Late birthdays do have an upside, huh? Today, she’ll look to defend her 100 fly title from last year’s Texas Invite, where she posted a 51.35 and won the race by over a second. Ochitwa was Arizona’s medley relay backstroker last season, but with sophomore backstroker Taylor Garcia‘s apparent return to form, Ochitwa has been freed up to wreak havoc on the fly leg of the medleys.

Great split by Annie… Looking back in the swimswam archives, you already reported multiple time by Worrell have been faster, including breaking the 22 second barrier by Worrell at NCAA’s 2015 when the Medley Relay happened as the first event of the day, whereas the 2016 NCAA’s Medley relay was at the end of the session… Look here’s your story on it 🙂

You’re right! Forgot that Worrell was quicker in 2015.

What would Sarah’s 24.4 be with conversion to yards and relay?