Larkin May Be Leaning Towards Commercial, Home Of Campbell Sisters 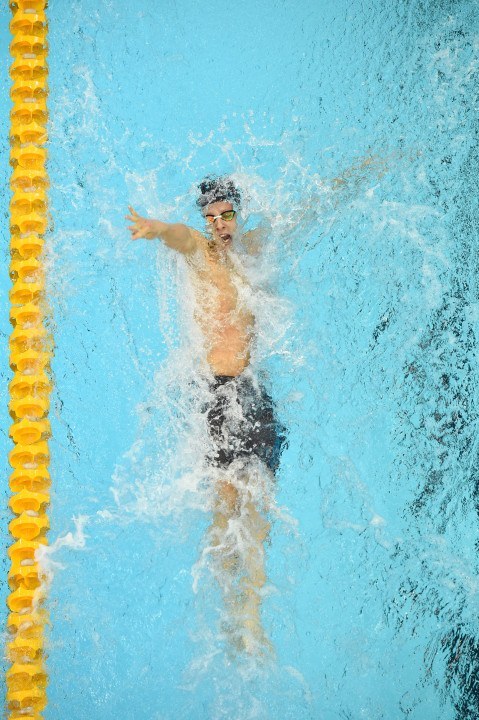 On his coaching tour, 2016 Olympic silver medalist Mitch Larkin of Australia may have found a 'swimming family' under Simon Cusack at Commercial Swimming Club. Archive photo via Courtesy of Swimming Australia

As a follow-up to our report from September revealing that double World Champion Mitch Larkin was looking to change training homes, The Australian is reporting now that the 23-year-old backstroke specialist is leaning towards Commercial Swimming Club. Commercial is home to the dynamic and speedy Campbell sister duo of Cate and Bronte and coached by Simon Cusack, the Australian Institute of Sport’s ‘Coach of the Year’ in 2013.

Within his 7-year tutelage under storied coach Michael Bohl, Larkin soared to the top of the world in his signature 200m and 100m backstroke events. He took both titles at last year’s FINA World Championships and followed that up with Australian, Oceanic and Commonwealth Records in the events at last November’s FINA World Cup in Dubai.

Larkin was expected to be a major player in both the 100m and 200m backstroke events at the 2016 Olympic Games, where a mega-dual was set to go down between the Aussie and American rival Ryan Murphy. Things didn’t go exactly according to plan, however, as Larkin finished off the podium in the 100m, although he was able to secure silver in the 200m event. Larkin was also a member of the Australian men’s bronze medal-winning 4×100 medley relay.

In what he called ‘the toughest decision of my life’, Larkin said in September that, “in order to keep motivation at its highest along with excitement within the training environment, I’ve decided to look at what other programs along with other coaches can offer over the next Olympic cycle.”

What ensued was a coaching tryout tour of sorts, with Larkin visiting at least 7 different clubs, including Tracey Menzies of Canberra, Richard Scarce of Bond and Christ Nesbitt of TSS Aquatics. He also visited the home club of girlfriend and double World Champion Emily Seebohm, spending time with David Lush at Brisbane Grammar. (The Australian)

Although no definitive decision has been made, Larkin is reportedly looking to join Commercial to kick-off his Tokyo 2020 campaign. He tells The Australian, “I don’t have a swimming family at the moment and I have felt lost sometimes, but with Simon [Cusack] I did get that sense of a family again,’’ Larkin said.“I have really enjoyed being there for the last week. It’s been really enjoyable with the Campbells and Will Stockwell and Shayna Jack. Simon’s attention to detail is there. It’s really professional and enjoyable and I’ve got a good feel from Simon.’’

In reviewing Larkin’s goals and potential training plan, the athlete and coach discussed how training volume would not be impacted, even as Cusack is known as a sprinting specialist. After all, Cate Campbell did break the 100m freestyle World Record under his guidance just weeks before Rio.

“He’s more than happy to sit down with me and talk about kilometres and volume,’’ Larkin told The Australian.

“A couple of sessions we did last week were very similar to what I did with Bohly and the heart-rate set we did was as hard or harder than I’ve done before, so that was really good.

“He’s ticked a lot of boxes but it would be wrong for me to make a decision off one week of training.’’

As such, we’ll look for Larkin’s decision in the coming month or so. In the meantime, Larkin is set to compete at the 2016 FINA World Short Course Championships, which kick-off on December 6th in Windsor, Canada.

Great. Put all the Aussie Olympic head cases on one team.

How he is a headcase?

He could try Brant Best…..back in Brisbane after NSW lost the blot again.

NSW has lost the plot again, has it ever had the plot? Poor leadership and more moving of the deck chairs on the titanic of Australian swimming. Looks like another generation of swimmers missing out. Good news for Queensland