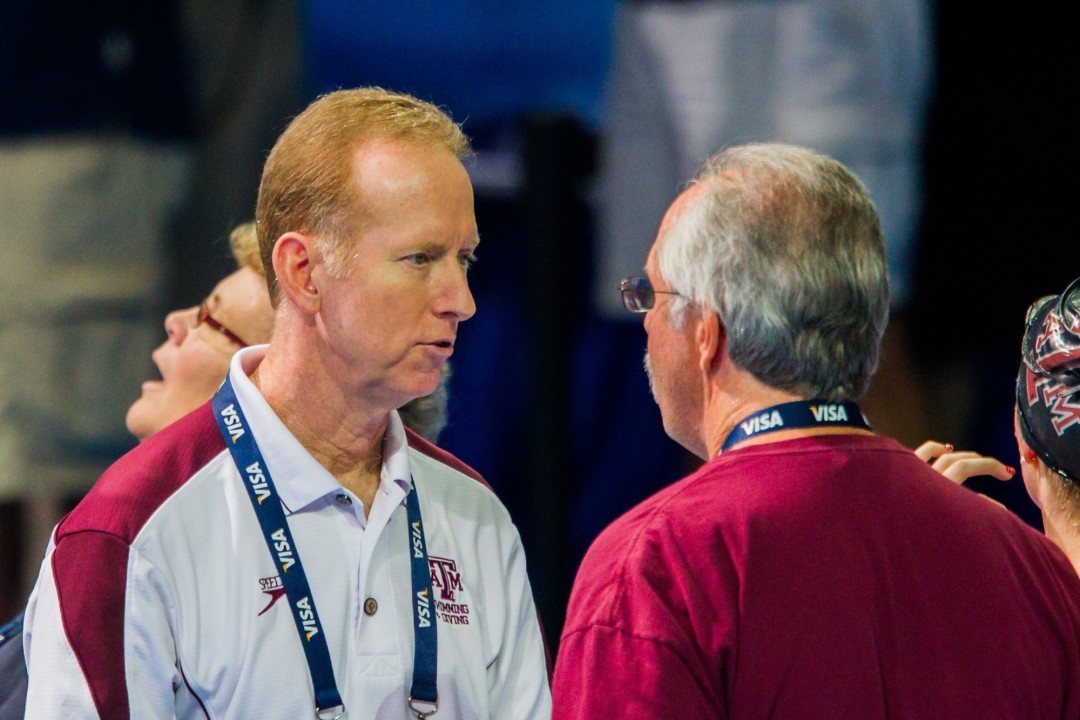 Steve Bultman has coached some fast swimmers down in College Station. One of them--freshman Beryl Gastaldello--may have made history last night. Current photo via Tim Binning/TheSwimPictures.com

Texas A&M freshman Beryl Gastaldello may have pulled off some swimming history last night on the women’s 200 yard medley relay at the 2015 SEC Swimming and Diving Championships.  Competing in the fly leg for the Aggies, Gastaldello clocked an unreal 22.46 split over the third 50 of the relay, which by our initial research is the fastest in history.  The Aggies were in a bit of a hole early, coming in 8th at the 100 mark before Gastaldello took over and brought Texas A&M all the way up to the second spot, giving Sammie Bosma a nice cushion to hold off Natalie Hinds, Chantal Van Landeghem, and Allyx Purcell for the silver medal.

We leave some initial skepticism in the title because reliable relay splits from past meets are sometimes hard to come by.  The next fastest splits we could find were a 22.52 from Christine Magnuson and a 22.55 from former [super-suited] Aggie Triin Aljand back in 2009.  Louisville’s Kelsi Worrell in December was 22.57 in December.  Elaine Breeden actually split 22.30 earlier that season at the 2009 Pac 10 Championships, but that Stanford relay was DQ’ed.  While no explanation has yet been seen as to why, given her split, it’s very possible it was an early relay takeoff from Breeden.  Tennessee’s Harper Bruens also falls in the top 10 (and maybe even top 5) with her 22.61 from last night, as well.

Gastaldello might be a new name to American fans, but the freshman is a widely-known star in her native France, and is a member of their National Team.

Fastest flat-start times (that I know of):

Fastest split in history? Really? 😯
I knew she had crazy speed in her but I’m really surprised. So early in her college career!
It looks like her first season in USA goes very well. No problem with yards at all.
I’m now waiting for the individual races. We’ll see her real level right now in these races.
But WOW! That sounds very cool for a first college season.
Last year in long course her best event was the 100 fly (59.51) so I can’t wait to see what she can do this week in that race. 😎

At risk of exposing my super nerddom – Worrell’s 22.57 was in December. She “only” split 22.66 at NCAAs last season. Dani Barbiea (Minnesota) had the same split.