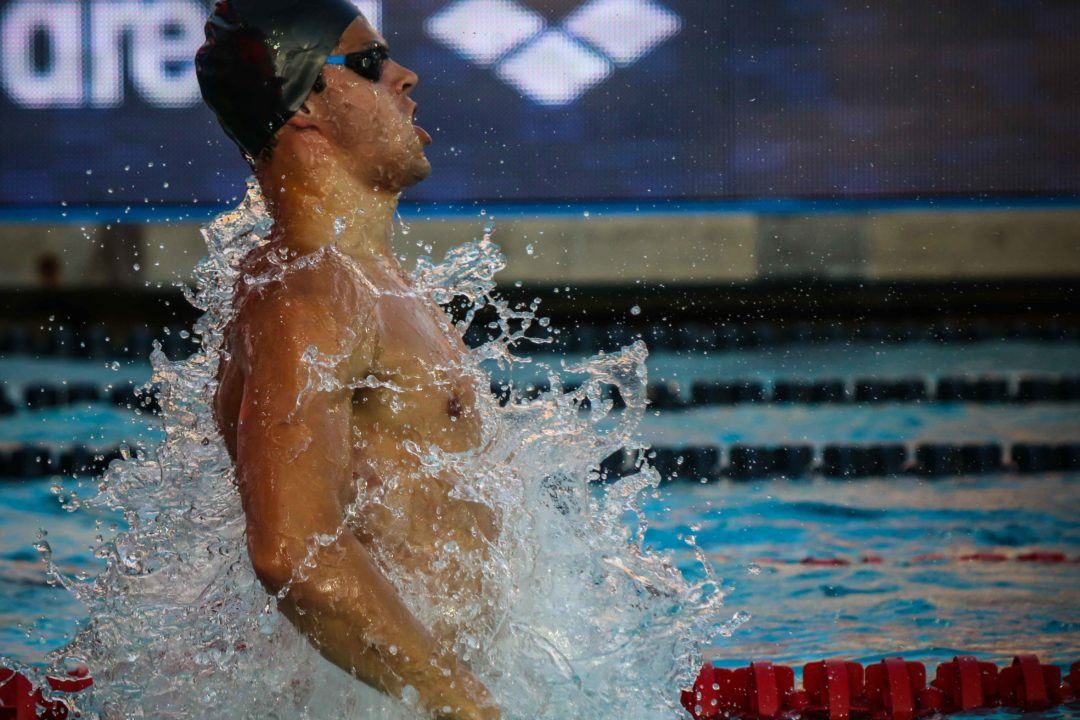 Michael Andrew rattled off another sub-25 swim in the men's 50 back prelims in Doha. Archive photo via Jack Spitser

There were only five events contested at day 2 prelims of the 2018 FINA World Cup stop in Doha, with many of the other events fielding less than eight swimmers. Tonight’s finals session will feature a full slate of twelve events.

Among the races done this morning was the men’s 50 back, where American Michael Andrew rattled off his third consecutive sub-25 swim for the top seed. After subsequent showings of 24.66 and 24.49 at the first stop in Kazan, the 19-year-old phenom hit a time of 24.73 in the heats for the top seed by over a second.

Currently, his 24.49 from Kazan has him in position to claim the second spot at the World Championships next year, and while that spot won’t officially be decided until June, he’ll be looking to lower that time in the final.

These prelims are ridiculous. Should have just been timed finals at night.

We are all watching the development of a Phenom in Michael Andrew!! I love that the new headlines have him alongside of Ledecky and Dressel. He is just so exciting to watch and has so much potential with all the Strokes that he swims well. I am like his dad and would love to see the 200 IM become his signature event.

agreed – he feels unstoppable this year and constantly improving …. we need guys like him

I love watching him swim! I do think he should stretch his boundaries and hire some elite coaches to see if they can improve him in any way leading up to the Olympics….his dad has likely done all he can. Might be nice to infuse a fresh perspective in terms of coaching. Might shave more time and be more competitive in the 100m and IM events. Otherwise, he is somewhat limited (thus far) leading into Tokyo (so it seems according to my laymen’s viewpoint, anyways)…

You’ve GOT to be kidding…….”Elite Coaches?” This kid is 19 years old and hasn’t peaked, and you’re already assuming that someone else could do better? Do you not remember his earlier races when his underwaters were poor – now he’s got those doing well. There aren’t many “elite” coaches, only “elite” athletes that know what they want. Peter is getting all kinds of advice from others and implementing it into their routine. If anything, I think more swimmers should consider transitioning over to Peter’s style of coaching when they get to San Diego.