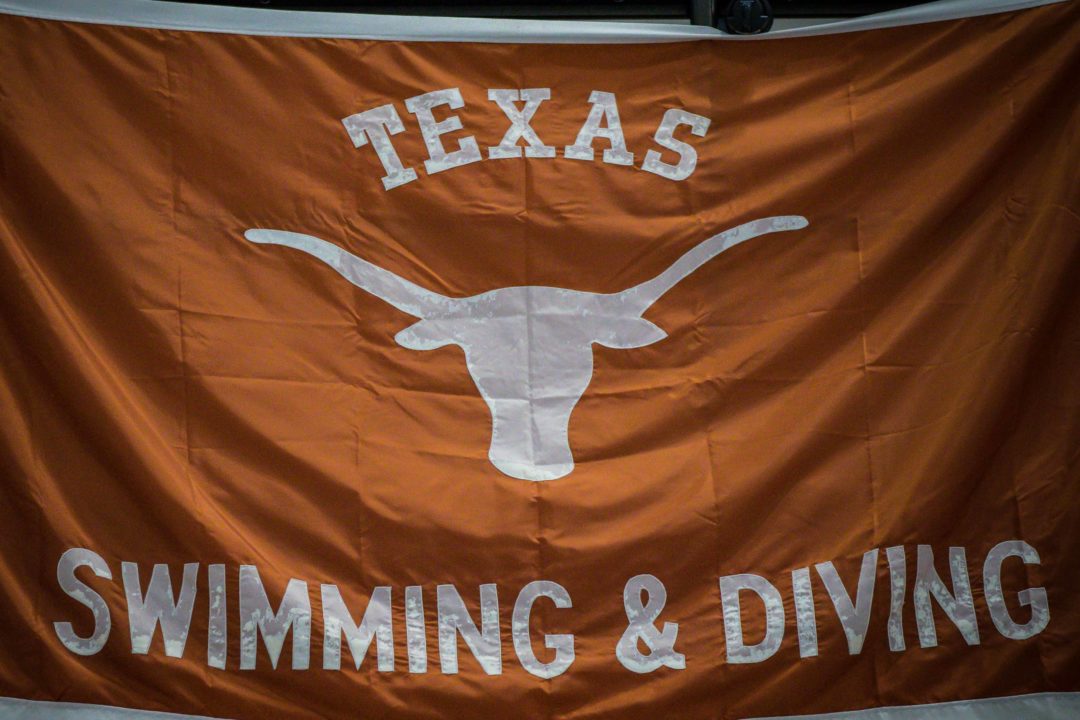 Texas' JohnThomas Larson had a breakthrough swim, lowering his best in the 500 free for the first time since 2018 with a 4:14.96. Archive photo via Jack Spitser/Spitser Photography

Thursday marked day 1 of the 2020 American Short Course Championships, a club meet that also serves as a last chance qualifier for local swimmers to try to make the cut for NCAAs. Texas’ JohnThomas Larson had a breakthrough swim, posting a best in the 500 free for the first time since 2018.

While Larson’s time should safely qualify him for NCAAs, the Longhorn coaches have some decisions to make. They may need to cut 4 or more swimmers based on the number of qualifiers they already had before this meet. Last season, Larson was fast enough to qualify, but was ultimately one of the two swimmers cut from the Texas NCAA roster.

Texas’ Jake Sannem, who took a redshirt this season, competed for the first time this season here. He was 2nd tonight in 19.91. That’s his first time under 20 per the USA Swimming database. However, he was entered in this meet with a 19.87, so the database time may not be accurate.

Go where ur needed.

Fify:
Go where ur needed, unless Texas calls you.

2 spots for the 4 divers, that leaves 16 swimming spots. Where exactly does he fit in?

I’d say “out.” Looks likely that 8 invitees will be left home (!!!): Koustik, JT Larson, Neri, Harder, and Peter Larson seem the most tenuous. Scheinfeld and Yeager haven’t been on form but idk if Charlie was truly rested yet at conference. Park would seem likely out. That’s 8 guys left home unless someone else is injured or otherwise out of commission. Unbelievable but a good problem to have I guess.

I assume Harty and Staka will be obvious inclusions as well, just unclear about Harty’s physical health. Staka is an interesting case, but I think is too valuable a relay piece to not be included.

Then we have 4 spots left for these 8 guys: Artmann, Scheinfeld, Zettle, Thomas, Yeager, Collins, Neri, and Koustik. Collins probably has the highest individual expected points right now and gets in, Artmann is second and Scheinfeld gets third. I think the last spot comes down to Thomas vs Zettle vs Yeager, with Neri and Koustik out.

Missing Jake Sannem, but he’s been missing the whole year.

Jake Sannem swam 19.91 50 free yesterday and 1:34.90 in 100 free prelims this morning. Speaking of a beautiful freestyle… I had chance to meet him few days ago – a wonderfull, well spoken, and polite young man. A big fan now.

You forgot P Larson, E Harder & P Varozza. That’s 4 spots for 11 guys. I think they need to add a distance guy, either Zettle or Yeager.