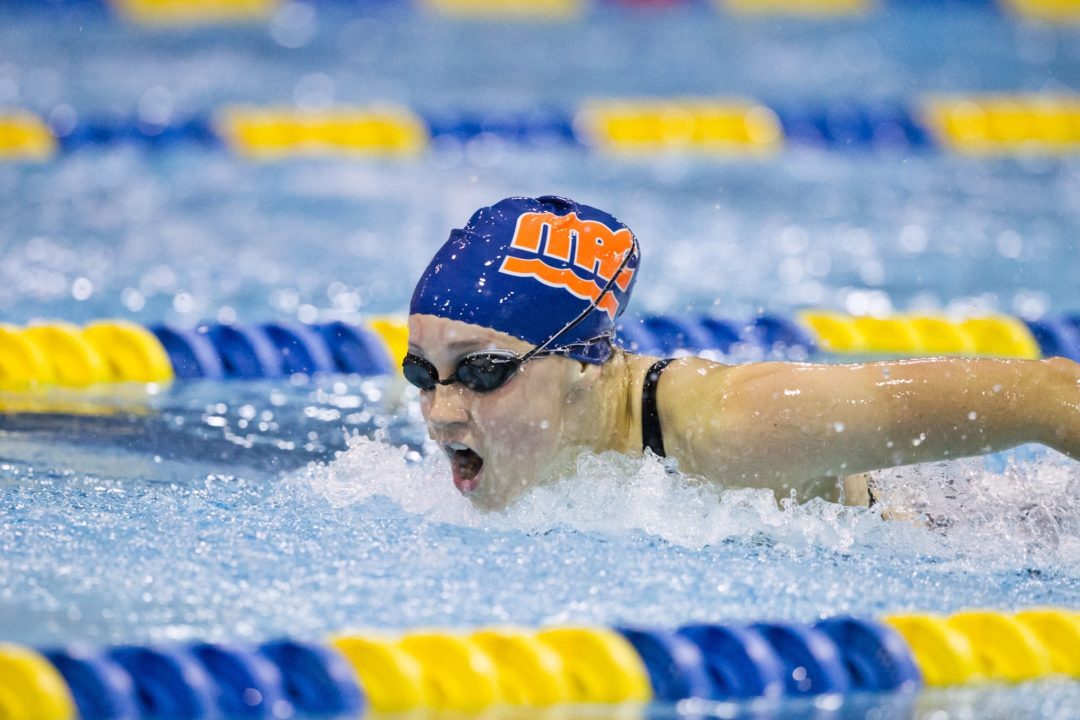 Marsh, the daughter of famed SwimMAC Carolina coach David Marsh, rocked two big back-to back wins both of which she won in AA-A record timing. The Pine Lake Prep swimmer first won the 50 freestyle where she was a 23.05 to take a solid chunk off the previous mark of 23.35. Marsh was also just off the state record in the race. She then went on to win the 100 fly in 54.08 dropping almost a full second off the AA-A record of 55.02. Archive photo via Tim Binning/TheSwimPictures.com

The North Carolina 1A/2A High School State Championships concluded this weekend giving the Raleigh Charter women a win, and a tie victory for the Carrboro and Shelby men.

The women led by over 60 points, taking the title with 284 points to Pine Lake Prep’s 222. Lincoln Charter was third overall with 206 points.

The meet saw a variety of records fall including meet records, AA-A records and AA-C records.

The first champion of the day came in the 500 freestyle final, which was held during prelims, as Carrboro’s Thomas Bilden took a big win. Bilden droped a time of 4:43.92 to claim gold, ahead of Hunter Crook and Ethan Knorr who battled for the silver medal. Crook managed to grab the silver about four and a half seconds behind Bilden.

Bilden also took home a gold in the 100 yard butterfly where he didn’t only win, but set a record in the process. Bilden was the only swimmer under the 50 second mark, touching in at 49.92 to break the previous AA-C record of 50.49. Zach Darden was also very close to that mark, but settled for silver with a time of 50.59.

The first relay was all about the Carrboro men, which included Bilden, as they stormed to gold in the 200 medley relay. The team collectively threw together a 1:35.00 to take down Shelby’s 1:36.32 and Raleigh Charter’s 1:37.64. That time was good enough to break the previous AA-C record of 1:38.52 by a wide margin. Will MacMillan led off the relay, and afterwards had two very solid individual performances.

Following that win for Carrboro was the first individual event of the evening for the men, and Will MacMillon stepped up to grab another Carrboro win. He claimed gold in the 200 freestyle with a new AA-A record of 1:38.85. That time smashed the previous record of 1:39.30. MacMillon went on to grab one more individual win that night, and even did so with a new AA-C record. He bettered the 46.08 mark with a winning time of 45.59 to win the event over Zach Lewis who dropped a 46.68 for second.

The first win for a swimmer not from Carrboro came from Taylor Powell in the men’s 200 IM. The LCHA swimmer clocked in at 1:56.85 to take down Simon Deshusses of Carrboro en route to gold. Deshusses was second in 1:57.01 followed by Danny Dilks in 1:57.96.

Silver medallist from the 100 freestyle, Zach Lewis, started off the meet with a victory in the 50. This time, there was no MacMillon and he trudged to the wall to win it by the smallest of margins. Lewis took the title with a swift 21.50 to beat a charging Zach Darden who was just a fingernail behind in 21.51. Keeping it close was Alex Vander Linden who rounded out the top three in 21.66.

The next big race was the 200 freestyle relay which went t0 Bishop McGuinness in 1:28.19. Raleigh was second almost a full second back followed by Lake norman Charter in 1:30.60.

Shelby’s Parker Campbell broke a record soon after as he took the win in the 100 backstroke. He absolutely smashed the AA-C record, coming close to other marks, with a 50.21 time to better the 51.23 record by over a full second.

The last individual win on the mens side went to Cameron Anderson of Tarboro who also took home an AA-C record with a 57.56 in the 100 breaststroke.

The 200 freestyle came after the women’s 200 medley relay which gave way to a big win for Raleigh Charter. The team was a 1:51.32 to win gold and just hold off Lincoln Charter who finished second in 1:51.38. Sophia Bhalla anchored the Lincoln team and almost made up a three second gap on the last 50, however fell just 0.06 seconds short of tying Raleigh for the win. Line Lake Prep wasn’t far back at all, touching in just two one-hundredths back in 1:51.40 to round out the top three in an extremely close race.

Raleigh also went on to win the women’s 200 freestyle relay later on in the meet, and did so in an AA-C state record time of 1:37.69. That time broke the previous record of 1:37.78 by a very small amount.

Jane Donahue was the winner of the 200 IM with a swift 2:05.07 to win by exactly two seconds. Coming in second was Mia Morrell from Carrboro in 2:07.07 with Kelsey Tunstall grabbing the bronze medal in 2:08.77.

Following Donahue’s swim was the Alyssa Marsh show. Marsh, the daughter of famed SwimMAC Carolina coach David Marsh, rocked two big back-to back wins both of which she won in AA-A record timing. The Pine Lake Prep swimmer first won the 50 freestyle where she was a 23.05 to take a solid chunk off the previous mark of 23.35. Marsh was also just off the state record in that race. She then went on to win the 100 fly in 54.08 dropping almost a full second off the AA-A record of 55.02.

After Marsh’s absolute showdown Christina Lappin picked up a win in the 100 freestyle with a 51.80.

The next two individual swims both gave way to new records as Lexi Souther and Olivia Ontjes both displayed very impressive results. In the 100 back it was Souther who trudged to the wall in 54.83 to claim the AA-A record for Parkwood. That beat Alyssa Marsh’s record of 54.86 set back in 2014 by just three one hundredths. Marsh was not entered in the race this year.

Thanks SwimSwam for recognizing the great Carrboro boys’ swims in addition to Alyssa’s record-breaking efforts. The small but mighty Carrboro boys team (only 7 scorers) made their swims count winning 2 relays and 4 individual events and taking second in two events! FYI: The guy you have listed as both Will MacmIllon and Will MacMillan is the same swimmer and his correct name is Will Macmillan. Proud swim mom.

Congrats coach, I know your proud.

Pick a lane any lane

Whoever disliked you comment should feel awful… Your daughter is doing a great job under a great coach. I wish I could swim for you too bad I live in AL. 🙁

Congrats to Alyssa and David! Good genes, coupled with good training = great performances! Having fun I hope! Do what you love and make a difference.