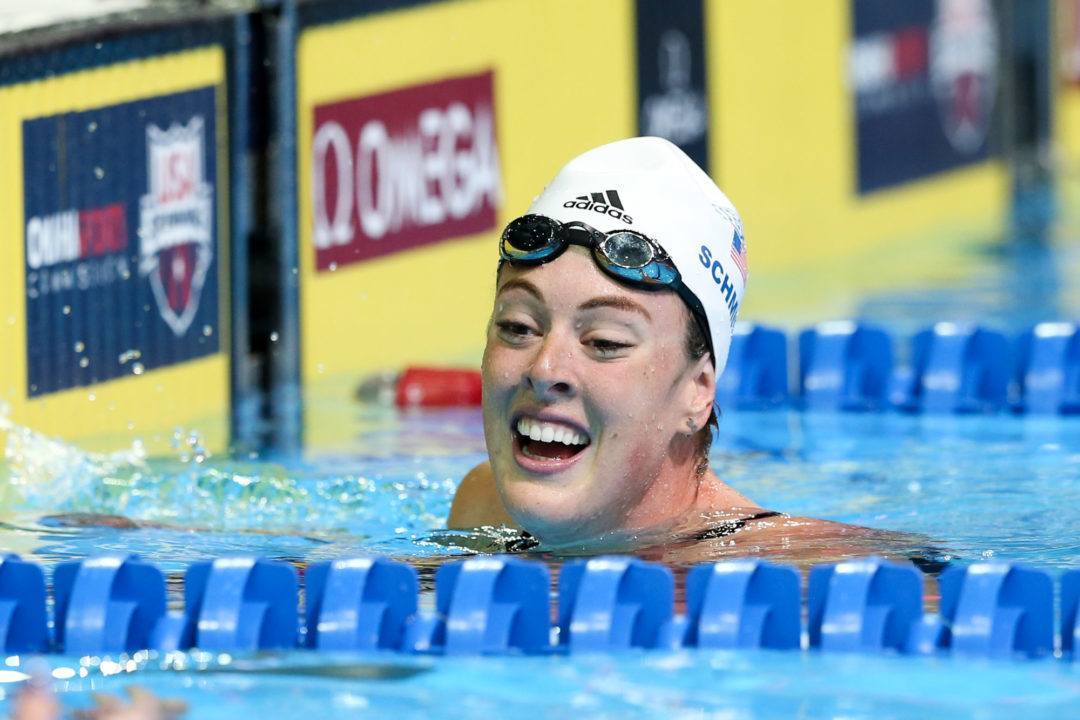 Olympic champ Allison Schmitt is set to swim her first race since the 2016 Olympics this month, as she's been listed by USA Swimming among the big names entered at the 2018 TYR Pro Swim Series at Mesa. Archive photo via Tim Binning/TheSwimPictures.com

Olympic champ Allison Schmitt is set to swim her first race since the 2016 Olympics this month, as she’s been listed by USA Swimming among the big names entered at the 2018 TYR Pro Swim Series at Mesa.

Schmitt hasn’t registered a swim in USA Swimming’s database since August of 2016, though she also hadn’t made any official announcements about either her retirement or her desire to continue competing. Schmitt never left the USADA drug-testing pool, which is typically a pretty good indicator of retirement, and social media posts from her and Michael Phelps last year hinted that Schmitt might be looking to make a comeback.

The four-time Olympic gold medalist took home relay silver and gold in Rio after winning the 200 free individually in London in 2012. A longtime swimmer of Bob Bowman‘s, Schmitt followed Bowman and Phelps to Tempe, Arizona when Bowman took over as the head coach at Arizona State. Mesa makes sense from a travel perspective, then, as Schmitt is already based in the area.

Appearing on the entry sheet isn’t a guarantee for competition, of course. Several other big names have entered previous Pro Swim Series meets and then scratched out, so it’ll be worth keeping an eye on Schmitt’s status leading up to next week’s meet.

Schmitt isn’t the only Olympian potentially set to make a return to competition in Mesa. Conor Dwyer hasn’t logged a swim since last August, though he has already entered, then scratched, both Pro Swim Series events so far this year. Cullen Jones hasn’t competed since November and is entered in Mesa. Leah Smith also hasn’t raced since November. She, like Dwyer, has been a scratch at both PSS meets so far, but with her training base set in Tucson with the University of Arizona’s pro group, Mesa seems like a natural debut meet for her, and she’s listed among USA Swimming’s big names.

Psych sheets should be on the way shortly, with the meet beginning next Thursday.

I think it’s great that Allison will be swimming in Mesa. She is a great swimmer, great role model and I will certainly be cheering for her.

That article about Allison Schmitt is a good excuse to watch again her greatest accomplishment in swimming in London in 2012 when she swam, in my opinion, the greatest 200 free race a woman has ever swum. And that race is also special because the late Camille Muffat is in that final too and finishes on the podium.
https://www.youtube.com/watch?v=b3YgUGhMTB4

What disappointments me most is that Americans had three outstanding swimmers at 200 free that peaked very close to each other and there was unrealized unique opportunity to set unbeatable forever world record at 4×200 relay.
Schmitt: Olympic Champion – 1:53.61 (2012), Franklin: World Champion – 1:54.81 (2013), Ledecky: Olympic Champion – 1:53.73 (2016). The decline of first two swimmers in this list was so sharp that they first of all never swam together as final team and secondly on such a short time frame their peak periods haven’t overlapped even closely to challenge Chinese world record.

Send Coleman’s carpool down to Mesa to find out what is up with her.

Does anyone ever retire in the US? She has nothing left to prove. I know she must enjoy swimming but i feel swimmers in the US hang on and on and on compared to other countries for whatever reasons.

Maybe she just likes to be a pro swimmer? What’s so wrong with that?

Anthony Ervin won a gold medal in Rio. That’s all

Ervin. Lezak. Phelps. Couglin. Is there a problem with longevity?

Grevers is still hanging in there as well with solid determination

It seems a little disingenuous to say this phenomenon is only happening in America. Just look at the Japanese qualifying meet. You have Koga and Irie winning events in their 30s. I think the sport in general is no longer exclusively for 16-24-year olds, and how is that not a good thing?

Is she going to swim 200 or she is targeting shorter distance? She isn’t 28 yet. It is the age when Federica Pellegrini made her personal bests in 100 and 200. I wish Allison to regain competitive form and to have one more gold medal in two years in Tokio.

Gold in what event? No sure thing for the US women on relays anymore… my money is on Canada for 4X1 and 4X2 Free in 2020

4×2 I guess. The competition of getting on American 4x1free relay is tougher than the win of relay by itself.
Look, we had exactly the same discussions and same type of arguments before Rio and Budapest. It is still three seasons ahead and I won’t make any guesses now. Rather to irritate someone else’s patriotic feelings ( 😀 ). No, not in the mood now.

Be nice to see her regain that 200 meter form…She looked so strong at one time..

Glad to see her and Cullen still swimming!