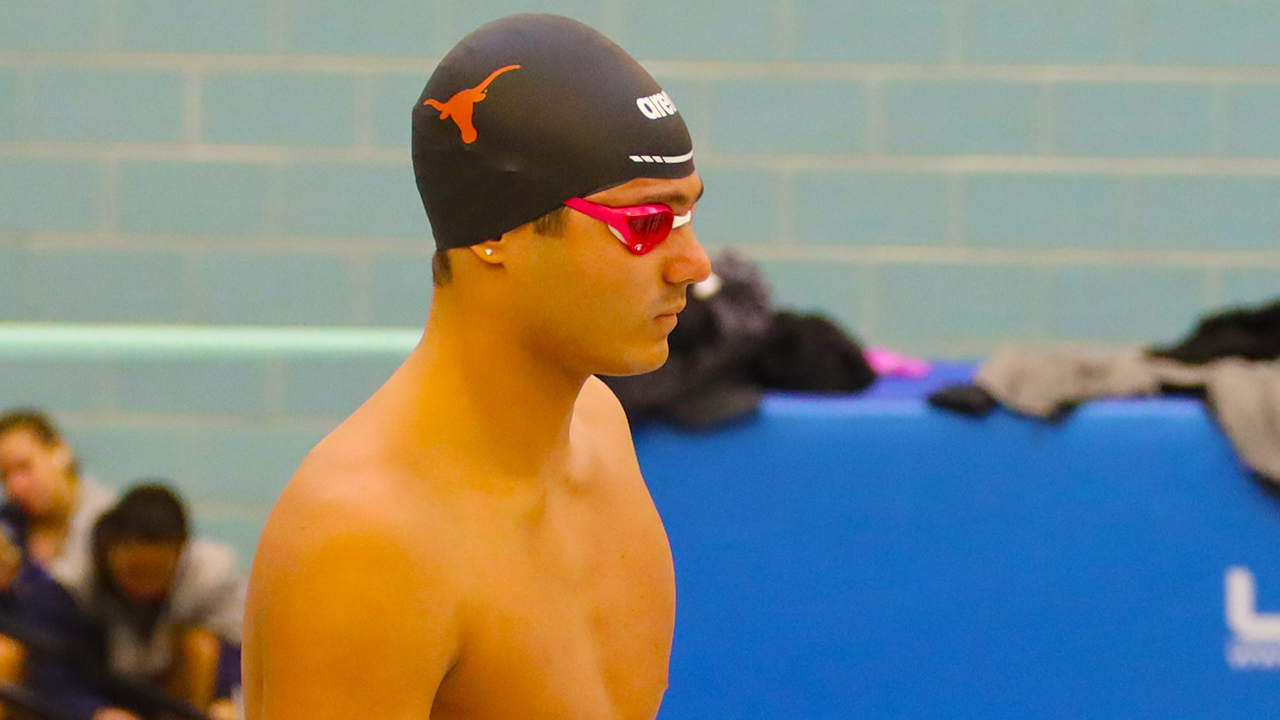 The list of Longhorns who have recently left the program has grown to include All-American Anthony Grimm and Adam Fusti-Molnar. Archive photo via Coleman Hodges

On the heels of Texas junior Ethan Heasley announcing his retirement two weeks ago, the list of Longhorns leaving the program has grown to include former No. 1 recruit Anthony Grimm, Adam Fusti-Molnar, and fellow sophomore Marko Vujosevic. Multiple sources told SwimSwam that junior sprinter Zac Van Zandt is also part of that departing group, but Van Zandt appears to have denied that report on Twitter.

A backstroke and butterfly specialist, Grimm helped the Longhorns’ 200 medley relay team earn a runner-up finish at the 2022 NCAA Championships with a 20.65 backstroke split as a freshman. At his first Big 12 Championships, he secured a silver medal in the 100 back with a time of 45.71 and placed sixth in the 100 free (44.25). Grimm added conference titles in the 200 and 400 medley relays.

Van Zandt also made an NCAA A-final last season as part of the 400 medley relay team, throwing down a 44.79 butterfly split as Texas placed 4th. Additionally, he contributed points individually with his 12th-place showing in the 100 fly (45.21). Both Van Zandt and Grimm earned All-American honors last season for their relay performances.

Fusti-Molnar and Vujosevic are both sophomore breaststroke specialists who spoke briefly to SwimSwam about their decisions.

“I thought the program just wasn’t a good fit for me, that’s why I made the decision to leave the team,” said Fusti-Molnar, who left the Longhorns’ program around the start of this semester. “I don’t intend to transfer to another college, or another team. For now I’m trying being unattached. I will just have to wait and see how training goes and decide when and if I want to compete.”

Vujosevic said he is no longer swimming due to personal reasons.

That makes a total of at least 10 eligible undergraduate swimmers who have left longtime Texas head coach Eddie Reese’s powerhouse program since the end of last season. Among those who no longer appear on the Longhorns’ roster are junior butterflier Ben Charles, junior freestyle specialists Victor Tremblay and Jimmy Gavin, senior sprinter Trey Jackson. Over the summer, versatile sophomore Tim Connery transferred to Virginia and junior butterflier Armando Vegas transferred to Indiana.

Last season, the Longhorns boasted 23 NCAA qualifiers — 19 swimmers and four divers — the most of any men’s program headed into the national championships.

Texas kicked off its 2022-23 campaign with an intrasquad matchup two weeks ago before hosting TCU for its season-opening dual meet on Friday.

Does anyone have any insight as to whether Grimm has entered the transfer portal, or if he is stepping away from the sport?

I get the feeling he’s leaving the sport.

Interesting. What is the intuition on that? Would be a huge loss for the sport considering the potential he’d shown in HS.

Sorry, I just saw this. He seems to not follow other swim teams on Instagram, which is common I’ve noticed with other people who transfer to swim elsewhere, seems to still have a desire to stay at UT, and all the NS’s over the summer push me in the direction that he’s done swimming, which yeah, really sucks considering he was 20.8 50 back as a sophomore.

For those doubting the immediate impact, perhaps SwimSwam can help:
https://swimswam.com/c-foster-hits-338-79-4im-albiero-goes-51-19-1fly-on-day-one-of-smu-classic/

Grimm is off the roster listed on the UT swimming web site, but Van Zandt is still there.

Gawlee, what’s going on in Austin?

Nothing is going on as far as I know. I cannot talk about other swimmers leaving Longhorns, but our son, Marko Vujosevic, could not have had better experience then he had being Longhorn for 15 months. Coaches, teammates, athletic and academic staff – everyone gave 100% support and he felt at home. He just figured he enjoyed academic and student life too much to dedicate so much time to swimming. Although he made good progress last year, his heart was not in swimming anymore and he did not want to keep one spot from someone who can contribute more. We, parents, will be forever thankful to Eddie and Wyatt for giving him an opportunity to be part of the team.… Read more »

Such a difficult decision. While I feel the lose for the LongHorns (since my son just started) I applaud Marko’s decision and wish the best for him. Swimming is a very intense sport and college CAN be a time of exploration (heck I would have done better had I taken a gap year). I’d love to see Marko come back when he settles in a bit but totally understand his decision. Congratulations on raising a young man that knows himself well enough to have seen this and to have the fortitude to make the decision. Again, Love to see him in the future, either in the pool, or on campus!

The pride and winning tradition of the Texas Longhorns will not be entrusted to the weak nor the timid.

Chachi – Many do not understand that to be great is not everyone. The timid and tame can go elsewhere. HookEm

I’m too old for this. This is my last year as Texas head coach.

Grimm had no recorded competitive swims over the summer, but a small hand full of NS (no start/no shows). Leaves a hole in the 200MR for sure. Opportunity for O’Conner & Harder, or someone else (Larson?) and wouldn’t be super surprised to see Carson lead off 400 MR.

Remember when we had no breastrokers and John Murray stepped in very admirably?

Zac stepped in very admirably last year, thinking this might be a breakout year on the sprint fly side. Hope he is still in it.