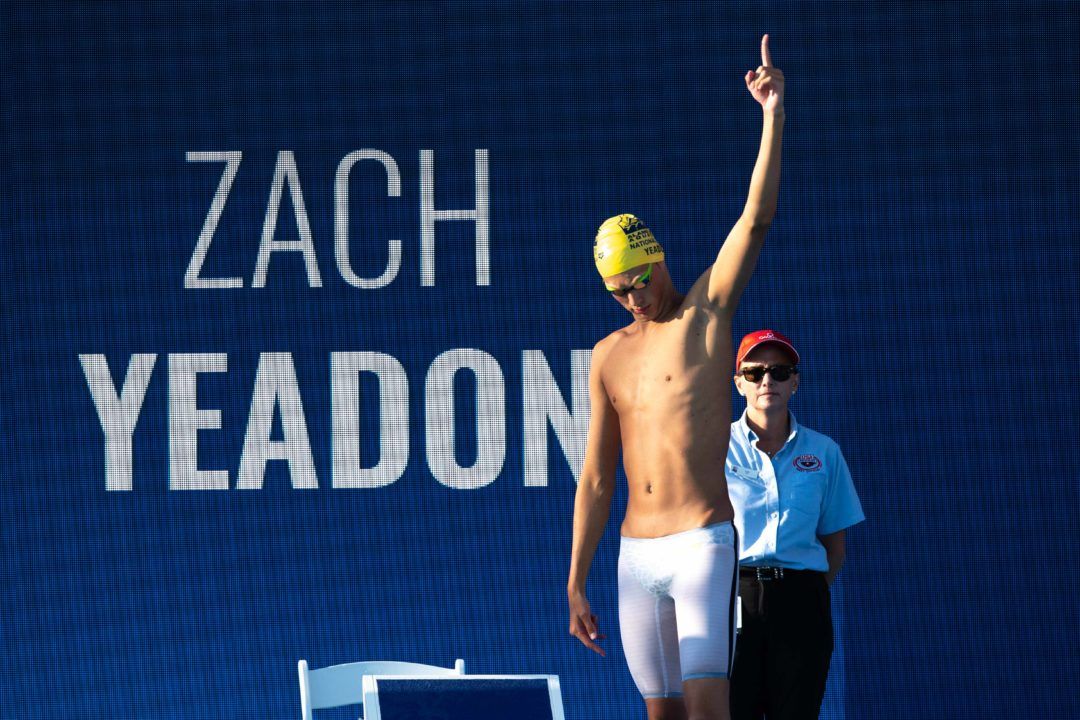 Yeadon scored in the 500 free and mile at both the 2018 and 2019 NCAA Champs, while he's the reigning ACC champion in both races. Archive photo via Mike Lewis/Ola Vista Photography

According to a Cal Athletics release today, All-American and reigning ACC champion Zach Yeadon is transferring to Cal for his final year of eligibility. Yeadon entered the transfer portal after the shortened 2019-20 NCAA season.

Internationally, Yeadon competed for Team USA at the 2019 World University Games, racing the 400 free and helping the 800 free relay win gold by swimming on prelims.

Yeadon is a massive get for defending national champs Cal as they try to hold off Texas for the next NCAA title. If you add Yeadon’s projected points to a mock 2020 NCAA Champs, not accounting for diving or relays, the needle swings in Cal’s favor by over 20 points.

He would’ve been Cal’s top 500 freestyler last year by two seconds and their top miler by over 20 seconds, and he’ll link up with rising seniors Trenton Julian (1:33.1/4:12.7 last season) and Sean Grieshop (4:14.5/14:51.0) in the distance group. While Cal has had very strong mid-distance freestylers, Grieshop was their only sub-15:00 miler last season.

Like Maxime to Texas. Both powerhouses getting richer gonna be a dog fight at NCAAs for next couple of years.

There are many reasons, I’m sure. But just look at Rooney to see how well it can go. I wish Yeadon the best of luck with his final year.

We will never know how well it would have gone for Rooney, and i would argue Rooney was making strides his Junior year at Florida in the 100 fly already so …

Was there some other major change in Rooney’s swimming that we’re not aware of?

I mean, I’m never going to knock Florida – it’s a fabulous program that’s produced countless elite athletes – but the move does seem like the most likely causal reason for Rooney’s improvement this past year. Yes, could’ve been something else, but that’s what it seems like from the outside. Regardless, I’d say the transfer worked out for Rooney, whether or not he may have hypothetically done better staying at Florida.

Can’t say that for Clark Burckle.

Bob Bowman wishes he had him…..

This is all speculation, but I think it might have something to do with post-graduate plans. Notre Dame doesn’t exactly have an elite postgrad group, and I know Cal only allows swimmers who swam for them in college to train with them postgrad. Plus, you can’t beat Berkeley weather, and it’s a great place for graduate school.

really? what about Wyatt?

If you’re referring to my brother, I can’t speak on what Dave’s exact reasoning was for letting Wyatt train with the Cal men or the policy on the post-grad group, but Wyatt was pursuing his PhD at Cal at the time. So while he didn’t swim for Cal collegiately, he did go to school there.

You CANNOT forget to eat at the FRONTIER when you go visit Wyatt again!!! That is, once the NM Govenor opens up the restaurants in our state again.