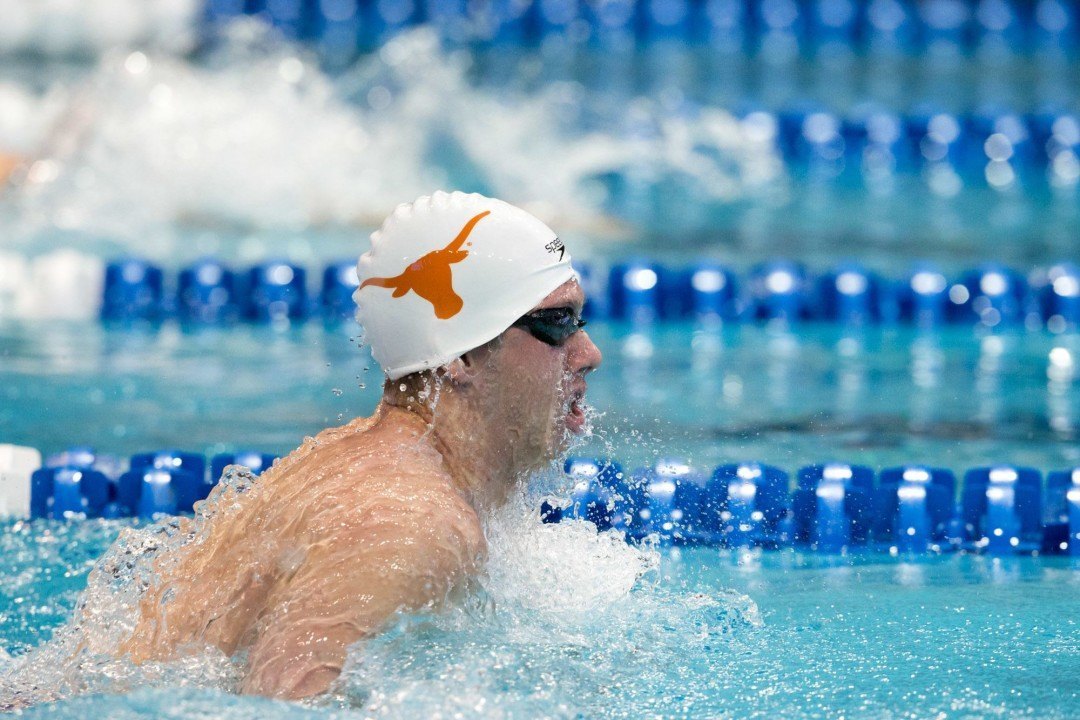 Austin Temple (above) was Texas' top 100 breaststroker in 2015 on a flat-start. Archive photo via Tim Binning/TheSwimPictures.com

Israeli breaststroker Imri Ganiel has left the Texas program, having returned to his native country to continue training for the 2016 Olympic Games after two seasons as a member of the varsity team.

According to his relative Uri Ganiel, Imri is back to continue working on his three years of compulsory military service. He completed 1.5 years before beginning college, and will use his national team training to fulfill a portion of that service.

Uri says that Imri plans to return to Texas in the 2016-2017 season to finish his degree.

The 23-year old Ganiel qualified for the Longhorns’ NCAA Championship team in 2015, when they brought home the team title, but wound up not swimming at the meet after the Longhorns qualified three divers and ran out of roster spots. He did play a role in their runner-up performance the year before. In a 2013-2014 season where Texas was short on breaststroke depth, Ganiel swam that leg of their 400 medley relay that placed 3rd at the NCAA Championships to earn First Team All-America honors. His split on that relay was 52.79.

The loss shouldn’t directly impact Texas’ chance at a repeat as they return a huge portion of their NCAA points. The Longhorns return a pair of sub-53 second breaststrokers in sophomore Austin Temple (52.34) and junior Will Licon (52.90), pending anybody sitting out to focus on Olympic training. Licon actually swam the 400 medley relay at NCAA’s, splitting 50.93: the third-fastest time from across the A and B finals.

Ganiel was the only Texas swimmer who didn’t at least attend high school in the United States.

What a death blow!

Just kidding, Texas is the best!

Balancing a challenging major with training is tough. Taking some time away from his studies to focus on swimming can only help Imri