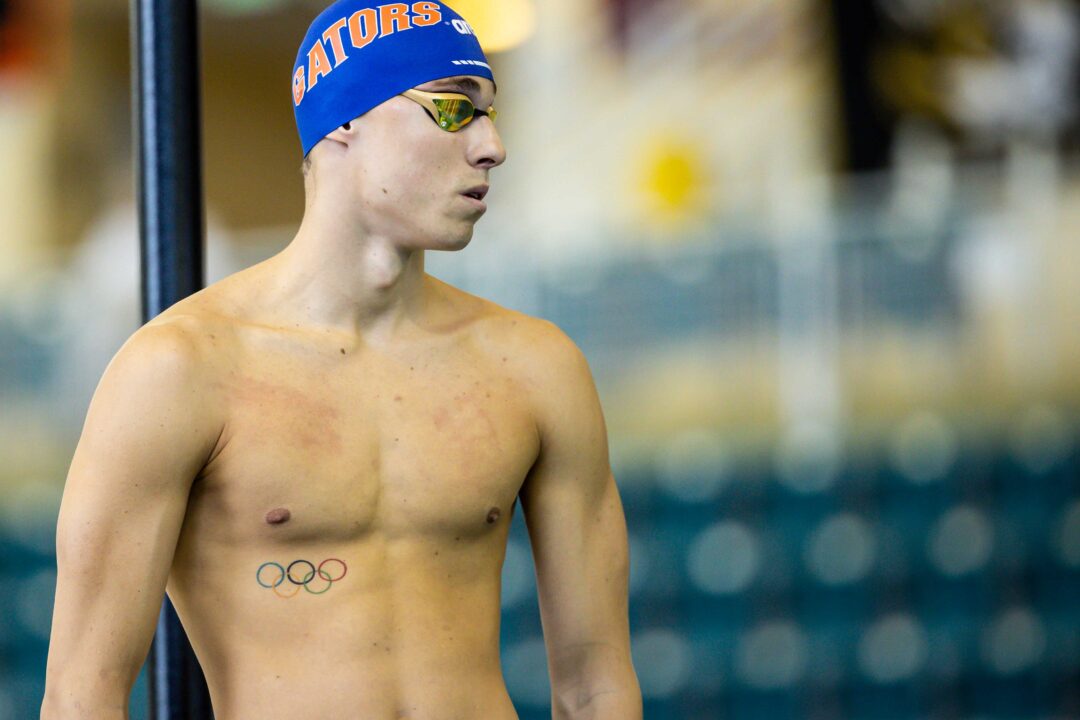 Mestre's previous best time was a 1:49.84 from last year, over a second slower than the time he swam today to win the men's 200 free. Archive photo via Jack Spitser/Spitser Photography

Perhaps the most impressive swim was by Venezuelan Olympian Alfonso Mestre, who won the men’s 200 free with a time of 1:48.31- a major drop from his previous best time of 1:49.84 from last year. He opened the race in 25.65/27.86 before closing in 27.80/27.00, his final 50 being his second-fastest split by nearly a second. Second-place finisher Joaquin Vargas was around three seconds behind Mestre, finishing with a time of 1:51.16.

Mestre just finished up his third season at the University of Florida, where he trains with middle distance phenoms like Kieran Smith, Trey Freeman, and Katie Ledecky.

Another SEC swimmer who raced tonight was Kira Toussaint. Toussaint clocked a 28.35 in a 50 back time trial, a bit slower than the 27.84 that she swam at the Eindhoven qualifying meet a few weeks ago. This is her second meet since moving from her home country of the Netherlands to her alma mater Tennessee, as she swam three rounds of 50 frees the JAX50 Sprint Dual Challenge two weeks ago. Toussaint is already named onto the Dutch team for the 2022 FINA World Championships in both the 50 and 100 back. Her best time in the 50 back is a 27.10, which stands as the European record.

University of Georgia swimmer Zoie Hartmann, who did not compete at the U.S. International Team Trials, swam her first event since Women’s NCAAs tonight. She won the women’s 100 breast in a time of 1:09.51, beating second-place finisher Bridget Engel by a little less than a second. She was well off her best time of 1:07.37 that was swam at U.S. Nationals in 2019, but it was closer to the 1:08.92 that she swam at Olympic trials last year to finish 15th. Had she swam her time today at U.S. Trials, she would have placed 12th.

Mabel Zavaros, another international Florida Gator, won the women’s 400 IM. She went 4:41.43 at Canadian Trials in April, and despite being under the FINA ‘A’ cut of 4:43.06, she didn’t make the worlds or Commonwealth Games team for Canada because she finished fourth behind Summer McIntosh, Tessa Cieplucha, and Ella Jansen. Tonight, she clocked a time of 4:43.84, just a few tenths off the ‘A’ cut.

Lots of great swimming but not as much star power as in previous classics. This meet has been a great place to see athletes like Caeleb, Katie, Simone, MA, and Lochte. Seems like you can’t turn around at this event without bumping into somebody that’s won an Olympic medal!

What has happened to ABSC, it’s like everyone has skipped town. Is Jack even coaching the Club swimmers?

What bone do you have to pick with UGA?

University of Freestyle swimmers have done it again