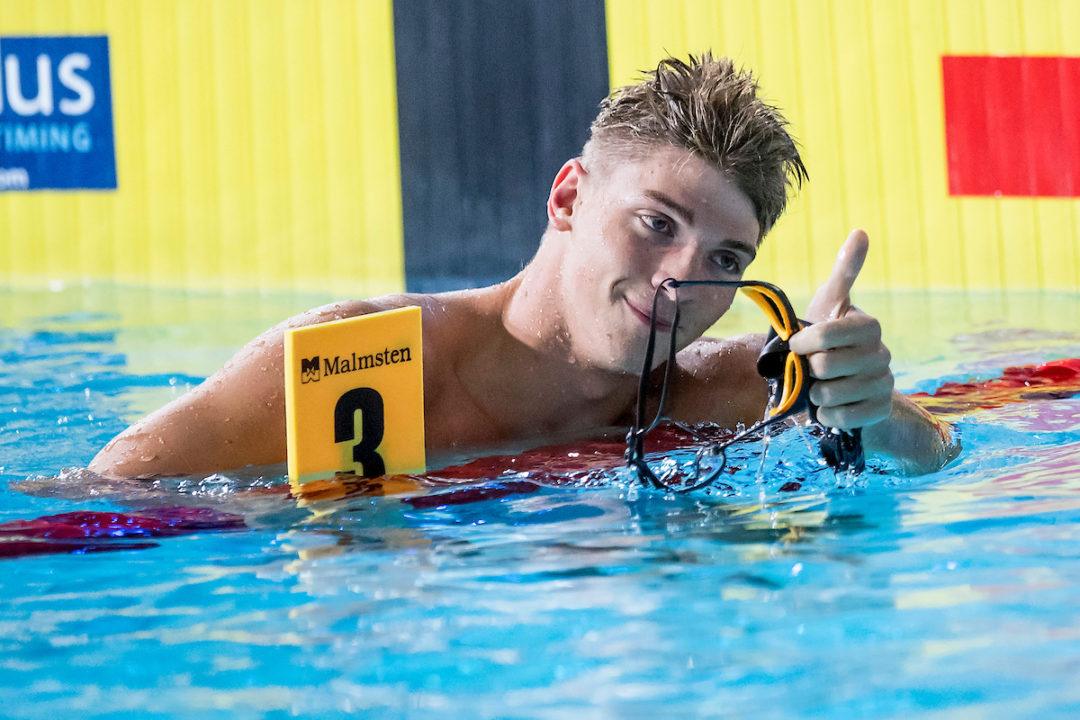 European gold wasn't enough for Alessandro Miressi. He was back in the water racing this week, and broke an Italian National Record less than 72 hours after the last swims of the European Championships. Archive photo via Andrea Masini/ Deepbluemedia/Insidefoto

After Italy’s record-setting performance in Glasgow last week, where they had the country’s most-successful European Championship ever with 22 medals and 12 senior National Records, a portion of the National team raced home to Rome to race at the Italian Age Group Championships.

That includes freestyler Alessandro Miressi, who won gold at the European Championships in a lifetime best in 48.01, and apparently was still a little short on his taper.

Italy looked like had missed a sprint window after its 400 free relay took 3rd at the 2015 World Championships. The 4 swimmers on that relay are now all at least 27-years old (Luca Dotto – 28, Marco Orsi – 27, Michele Santucci – 29, Filippo Magnini – 36), and missed the final at the Rio Olympic Games.

But instead, it appears that they may have inspired a golden generation for Tokyo, where at least Dotto and Orsi could still be young enough to contribute to prelims relays before handing off to this new group of young sprinters in the final.

Miressi ties China’s Ning Zetao as the 3rd-fastest 100 freestyler in the world this season.

Miressi looks to be the future of Italian sprinting. I’m hoping it lights a fire under Dotto and Orsi (and Condorelli, should he actually settle on a national allegiance).

“was still a little short on taper”…this is one of my least favorite ideas that I hear on pool decks. I’ll hear coaches say stuff like “I think you missed your taper by a couple days”. I find this idea ridiculous!
You do realize there are many other variables that go into why swimmers perform faster a week later or swim slow at a big meet…right??

He could’ve had a better start, turn, better sleep, more favorable gap in time between warm ups and swimming, etc…

I believe it was more a matter of being relaxed. The final at the EC for Miressi was the first international final, and he had to bear the weight of the 4th lane on top of that. He swam his first 25 meters a little tight (his coach said that much). In Rome, he was relaxed, had that “mission accomplished” easiness about him. This is a guy who is going to swim 47s left and right or I am very mistaken.

Leogeo & Luigi nailed many of the variables I was speaking of and then some.

I was waiting for both these two swims. I knew that Miressi had a 47 in him after his 46.99 split. And Ceccon’s maiden voyage into sub 49 territory was due after almost two years of stagnation in the 100 free. I might be wrong but i believe he went straight from 50 to 48 without ever swimming a 49.

Here we go..
Other great news: 17 year-old Thomas Ceccon has won the 100 free among Juniors in 48.87, and another Junior, Devid Zorzetto, bronze in early July at Helsinki’s EuroJuniors, has swum a 49.05 in the lead-off of 400 free-relay.
The next two seasons will be fairly interesting.

Good n otes. Going to add them above.

What does the 04/22 mean besides Morozovs time?

It’s the date that he swam the race.

Any theories on what happened to Caeleb??

There were plenty of theories: not tapered, not rested, jet lag, targeting only the Olympics, overtrained.

The latest explanation is motorcycle crash. It is not a theory, though.