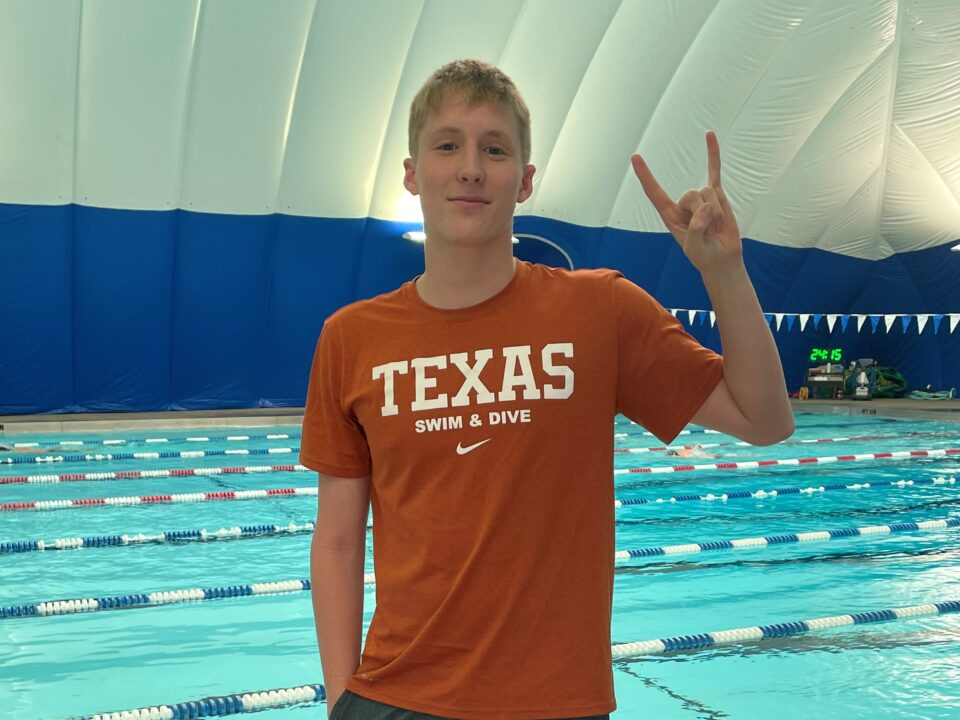 Alec Enyeart won by over 20 seconds and will be arriving at Texas this fall. It was a best time by about six seconds. Archive photo via Alec Enyeart

Highlighting the final night of NCSAs in Indianapolis was Alec Enyeart of Tsunami Swim Team of Kansas City. Enyeart dominated the men’s 1500 freestyle winning by over 20 seconds touching in a 15:05.10. Notably, that time was a best for the Texas commit and moves him up from #17 to #9 in the 17-18 age group of all time.

Also highlighting the final night was 15 year old Annam Olasewere of Chelsea Piers Aquatic Club who won the women’s 50 free in a 25.44. That time ties her for #21 in the 15-16 age group of all-time, notably placing her right behind Torri Huske. This was the second meet where Olasewere has been under the 26 second mark.

Also slipping into the top 100 in their age group for all-time was Campbell Chase of Cor Swimming. Chase won the women’s 200 IM in a 2:14.12, winning by over a second and a half. That was a best time for Chase as her previous best stood at a 2:16.68 which she swam in April to finish 14th. Notably, her time here would have finished fourth. In addition, her time here also places her at #24 in the 15-16 age group of all-time.

The men’s 50 back was the closest race of the night as JT Ewing of Arlington Aquatic Club tied with John Crush of Lakeside. Both swimmers touched in a 26.28. In addition to winning the 50 back, Ewing also was a member of the winning Arlington Aquatic Club 400 medley relay as he led off in a 55.33. The team also consisted of Collin McKenzie, Nolan Dunkel, and Kellen Cameron as they finished in a final time of 3:46.08.

After winning events the last 2 nights, Levenia Sim of TNT picked up a win in the women’s 50 back touching in a 28.68.

Nation’s Capital women’s 400 medley relay of Aris Runnels, Eleanor Sun, Ella Myers, and Camille Spink won in a final time of 4:13.76. Notably, they won by over two and a half seconds.

Cal has Matthew Chai as freshman this year…:)

Texas ain’t the only team to be worried about.