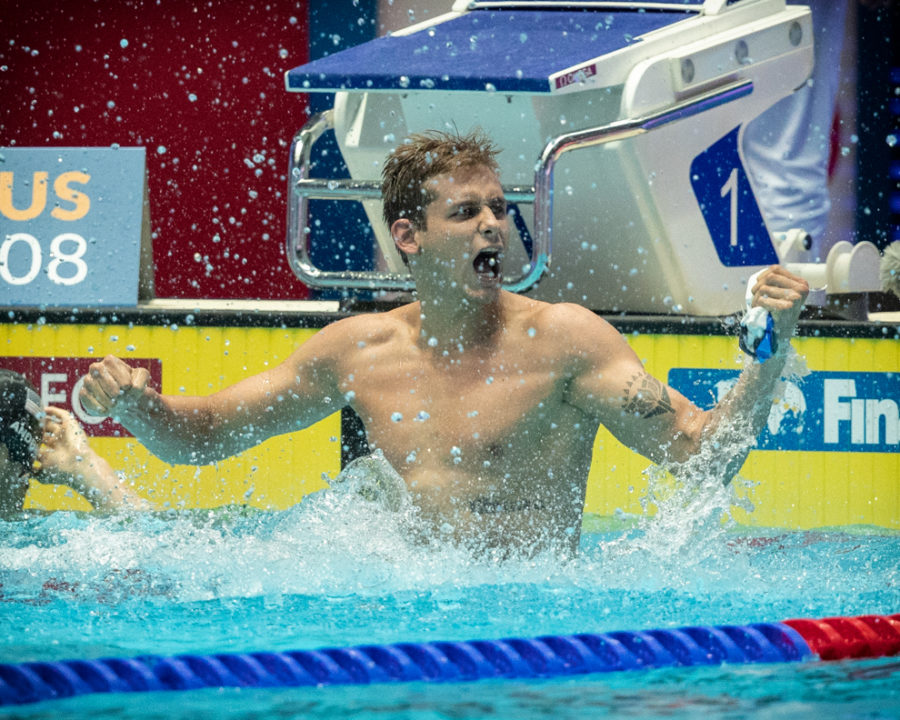 Bama's Zane Waddell defended his title in the 100 back, setting a new SEC Record as he became the 5th fastest performer in history. Archive photo via “Rafael/Domeyko Photography”

Swimmers geared up for the 100 back final on day 4 of the 2020 SEC Championships. In prelims, Texas A&M’s Shaine Casas had tied the SEC Meet Record, but defending champion Zane Waddell of Alabama was only a hundredth behind. Waddell, the 2019 50 back World Champion, came back to crush that record in finals with a 44.24.

Waddell also broke Casas’ overall SEC Record, which was the 44.48 that Casas swam mid-season at the Art Adamson Invitational. Casas was slightly slower than that time, with a 44.68 for 2nd place, on Friday evening.

Waddell’s best time coming into this season was a 44.77 done at SECs last year.

As would be expected for the 50 back World Champion, Waddell used his front-half speed to run away from this race. Although, Casas’ first 50 split of 21.37 on Friday is the best that he’s ever been to open up a 100 back, so if he’s saved any of his taper for NCAAs and he can come up with the back-half to boot, he’s still an NCAA title contender.

With that, Waddell became the 5th fastest performer in history. Casas, the 8th fastest ever, took 2nd tonight in 44.68. Connor Oslin, who set the former Meet Record as he won for Bama in 2017, is the 10th fastest man ever. Waddell has now won 2 individual events here and owns back-to-back titles in the 100 back.

Amazing! Didn’t realize he was already a world champ! Can’t wait for the NCAA rematch!

Yes, it was probably one of the most shocking win of the entire world champs, but it was awesome.

I don’t think that Zane Waddell will beat Shane Casas