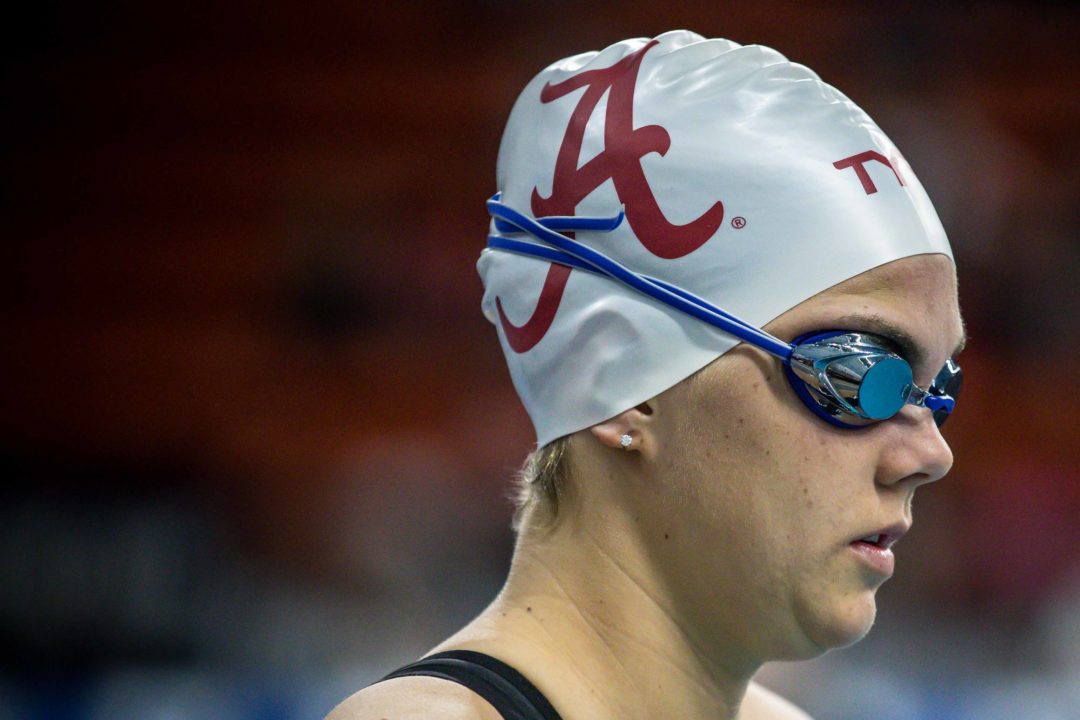 The Alabama relay consisted of Rhyan White (pictured), Avery Wiseman, Morgan Scott, and Kalia Antoniou. They are now a second off the NCAA record. Archive photo via Jack Spitser/Spitser Photography

The Alabama women broke the SEC record in the 200 medley relay during the first evening of the 2022 SEC Championships, posting a 1:33.94.

The team consisted of Rhyan White, Avery Wiseman, Morgan Scott, and Kalia Antoniou, and they defeated the previous record of 1:34.10 set by Tennessee in 2019.

Notably, White, Wiseman, and Scott all posted faster splits than the Tennessee women swimming the same legs of the relay.

Alabama is now just over a second off the NCAA record, which Virginia set last season at 1:32.93. The Roll Tide women will have the opportunity to face off with UVA at NCAA Championships next month, as well as the reigning NCAA champions, NC State, who just set a meet record at their conference championships.

With this swim, Alabama also broke its school record. The previous Alabama school record was set at the 2021 SEC Championships at 1:34.68. White was also a part of that relay, as well as Scott, but the 2021 relay also featured now-graduated Kaila Wong and current junior Cora Dupre. Wiseman replaced Wong on the breast leg, while Antoniou replaced Dupre.

Alabama also won the 200 medley relay last year, marking the 2nd-straight time they took home the title in the event.

The win is a strong start for Alabama, who is projected to come in second behind Tennessee at this meet. Tennessee finished 2nd in the event with a time of 1:34.63.

Alabama women will also have to face off against NC STATE, the defending NCAA champs, not just UVA.

She inherited quite a few gems and hasn’t brought in anyone on either side at this meet. Let’s see what happens when she has to do her own recruiting in a year.

Well recruiting out of the way, keeping elite athletes consistent st their peaks is crazy hard and she seems to be doing it well

The false start was glaring. As in this should have been called and was somehow overlooked.

Wait am I missing something? I feel like -.07 is a clear DQ.

It should be, unless Omega has moved their set point or someone determined there was an RJP error. Someone told me that Omega overhead cameras are in place at this meet, so it’s possible they identified a touchpad error.

We’ve reached out to the SEC to clarify.

-.07 with a Southern drawl is completely legal.

How can you break a record with a false start?