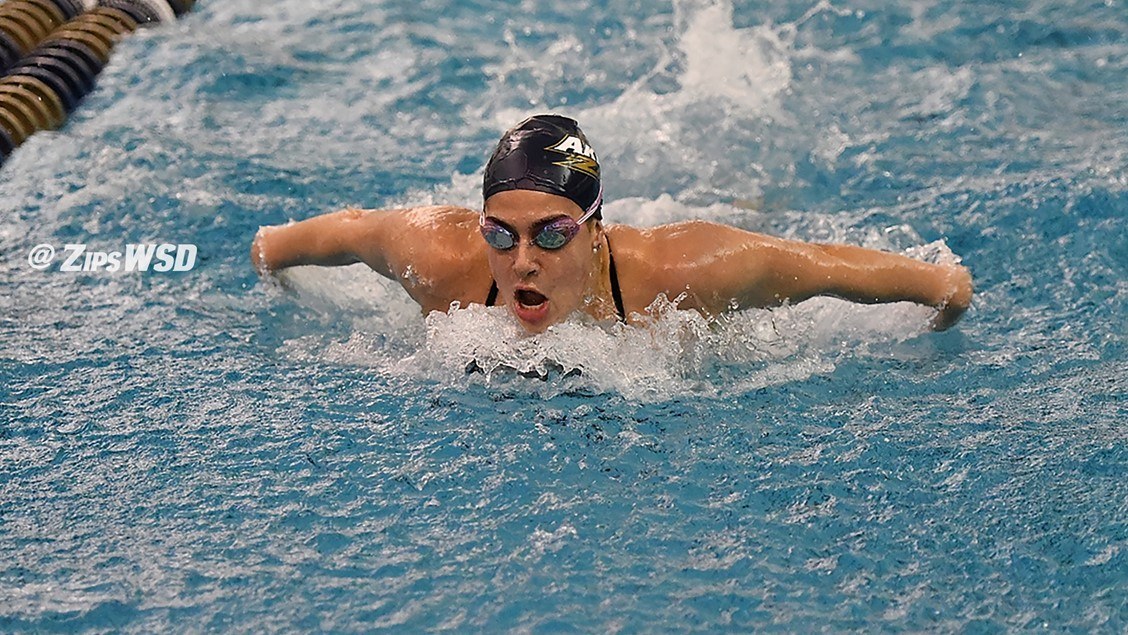 “I think the girls did a great job today,” said head coach Brian Peresie. “We had a late night and early morning to make our way to Munice today and I think that the girls brought a lot of energy. I’m happy with how they conducted themselves on the pool deck and just got up and raced today.”

The Zips garnered first place in all but one swimming event. Ball State won both the one-meter and three-meter diving events as well as the 100 backstroke.

In the first event of the afternoon, the 200 medley relay, the team comprised of sophomores Paulina Nogaj (Radom, Poland) and Paula Garcia (Madrid, Spain), in addition to seniors Sadie Fazekas (Windsor, Ontario) and Ragen Engel (Springfield, Ohio) turned in the top time of 1:45.50.

The Zips owned the top two places in the 500 freestyle event with freshman Avery Movold (Prince George, British Columbia) taking first in a time of 5:04.38 and sophomore Brooke Lamoureux (Belleville, Ontario) touching the wall second at 5:06.28.

The trio of freshman Sarah Watson (Winnipeg, Manitoba), Fazekas and freshman Sofia Henell (Linkoping, Sweden) took the top three honors in the 100 individual medley with Watson clocking in first at 57:53.

Nogaj earned a win in the fourth straight event for Akron with a time of 25.23 in the 50 butterfly, while Audrey Schank won Ball State’s lone swimming event in the 100 backstroke.

Garcia and Nogaj swam to victories in the next two events for the Zips, with Garcia turning in a time of 30.12 in the 50 breaststroke and Nogaj clocking in at 51.96 in the 100 freestyle.

Fazekas earned her first individual win of the day in the 50 backstroke, posting a time of 26.01.

Back on the boards, Crail placed second in the three-meter dive with a score of 268.35.

In the final event of the dual, Akron’s A relay team swam a time of 3:32.15 in the 400 freestyle relay to cap off the Zips’ 176-121 win over Ball State. The relay team consisted of Watson, Garcia, Pash and junior Morgan Waggoner (Fremont, Ohio).

The Zips do not compete next weekend but return to action, Nov. 16-18, as they travel to Cleveland, Ohio, to compete in the Magnus Cup Invitational.

The loss comes just one night removed from the Cardinals defeating Eastern Illinois. The women fell to 1-2 in dual meets on the year.

Ball State’s highlights for the day came in the diving portion of the competition. Rachel Bertram swept the wins in the one and three-meter dives with a 264.08 and 284.30, respectively. Caitlin Locante recorded a 244.35 on the one meter which set a career record and was good for second place in that event. Rachel Smallwood claimed third place in both diving events for the Cardinals.

Audrey Schank put together a solid performance for BSU in the pool as she claimed the only other first-place finish. Schank finished the 100 Back with a time of 57.02 to win nine points for Ball State early on in the duel.

BSU had multiple events in which it took second, third and fourth, including the 50 Back, 50 Free, and various others.

Both the men and women will be in action next in a co-ed duel at Grand Valley State in Michigan. That meet is slated for Saturday, Nov. 17, and will get underway at 1:00 p.m. ET.