After Swearing Off the 200, Pellegrini to Race it in Genoa and Turin 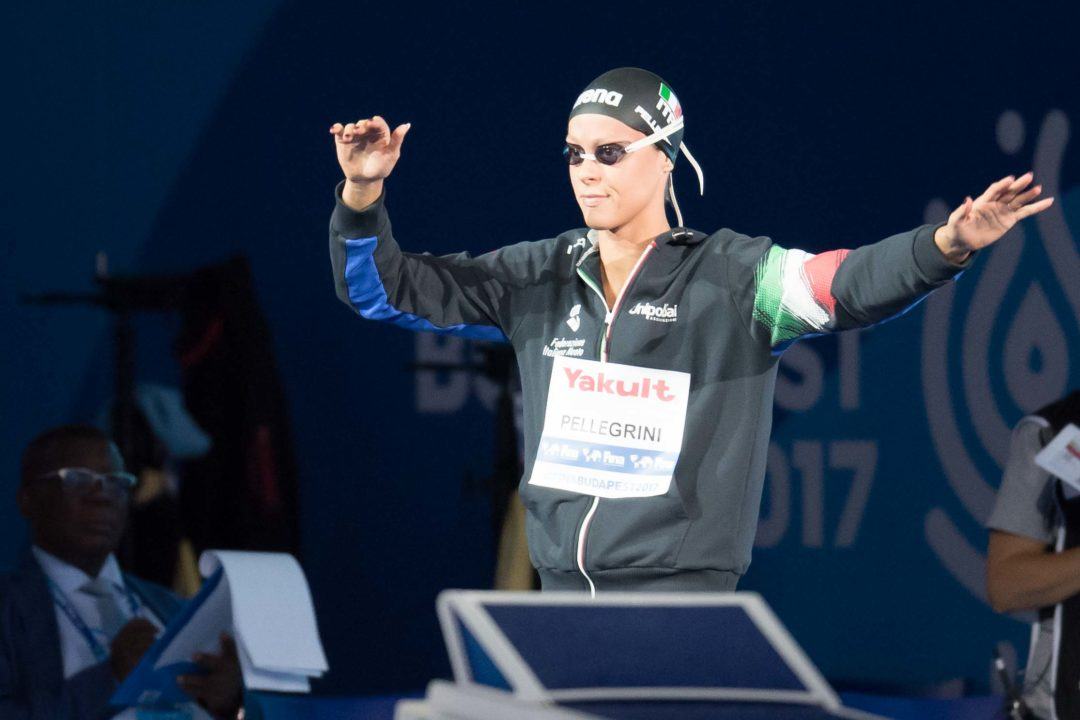 Sources say that defending World Champion Federica Pellegrini is planning to swim the 200 free at the upcoming 44th Trofeo Nico Sapio in Genoa and Energy for Swim 2018 in Turin in December. Archive photo via Mike Lewis/Ola Vista Photography

Pellegrini, the current World Record-holder in the LCM 200 free, had previously announced she would no longer swim the distance in international competition. That announcement came in the summer of 2017 just after she upset Katie Ledecky to win the World Championship title in Budapest.

Recently, Pellegrini expressed interest in continuing to swim through the 2020 Olympic Games in Tokyo. As reported by SwimSwam’s Karl Ortegon, using analysis of Pellegrini’s interview provided by SwimSwam Italy’s Giusy Cisale, Pellegrini answered a question about a potential Ledecky 200-1500 double in Tokyo by saying, “Yes, but the final of the 200 comes first… and in any case I do not think only of her, but of all the young people who sprout, the others are the real danger.”

I mean, 200 free is her best chance BY FAR to medal, so I don’t understand why would she swore off off it?

It’s so amazing. Ikee, Ruck, Titmus, Oleksiak etc. – all these girls are referred in swimswam articles as teens. And they ARE in accordance with their birth certificates. But Katie Ledecky being treated like a veteran is just three years older. They all belong to same generation. ‘Younger/older’ terminology isn’t applicable to this group. The illusion happens because Katie has been in leading position for 6 years already. That is usually associated with swimmers who are close to their retirement age. Pellegrini and let’s say Tuggle represent different generations that won’t be a factor in 2020: one(generation) will be already out and another one won’t be yet in ruling group at 200.

She’s right about “the young people who sprout.” Who knows how fast Ruck, Titmus, Ikee, et al will be by the summer of 2020. That said, what else would Pellegrini swim? She’s not quite world class in any other event. And even though she wouldn’t be a favorite for a Tokyo medal on anyone’s form charts at the moment, she’s tough, she’s wily, she’s a great strategist, she always seems to rise to the occasion, and she IS still the world record holder. And really, how many of us expected her to win in 2017?

That Federica Pellegrini has swum under 1:55 wasn’t surprise to anybody. Her best time previous season was 1:54.55. With the absence of Sjostrom she with Ledecky and McKeon were considered major contenders for the place on the podium. That Ledecky wouldn’t be able to complete the race with the pretty ordinary for her pace at first 150m expected practically nobody.

She could swim the 400 free. She is a former world record holder in that event. If she focused on that event she could probably be world class by 2020.

But when it comes down to it, Pellegrini’s sweet spot is always going to be the 200 free. It’s hard to pursue other events knowing you could still (probably) do better in your prime event.

Nobody never said that winning Olympic medal in 200 free will be walk-in-the park. Eleven(!!) of currently active swimmers have personal best under 1:55. Not all of them are swimming next to their personal bests, but still – eleven swimmers. 1:54 area became as defensively populated as 52 zone in 100 free race.