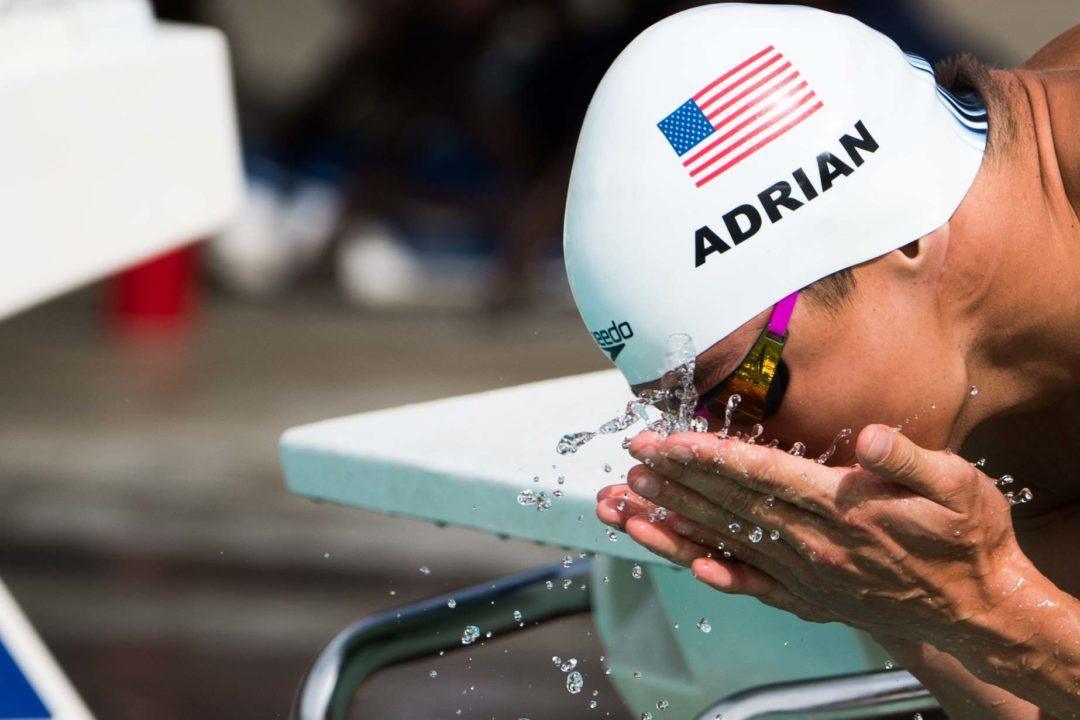 Nathan Adrian﻿ posted a solid 48.17 during this morning's 100 free prelims, but won't be back to swim it tonight. Current photo via Mike Lewis/Ola Vista Photography

Nathan Adrian posted a solid 48.17 during this morning’s 100 free prelims, but won’t be back to swim it tonight.

America’s #1 sprinter right now scratched out of the A final, along with Conor Dwyer and Anthony Ervin. Dwyer was also seeded first in the 200 IM, but he and Mitchell Larkin dropped that race. That means that Adrian, Dwyer, and Ervin are done for the meet, while Larkin will focus on a battle with Ryan Murphy and Jacob Pebley in the 200 back A final.

Bronte Barratt and Leah Goldman each dropped out of the 200 IM A final as well, while Patrick Conaton scratched from the 200 back A final.

Amy Bilquist and Jessica Hardy bowed out of the 100 free A final, as Bilquist will focus on the 200 back, where she swam a lifetime best this morning. The 100 free A final is still intact for the women, which features Dana Vollmer, Simone Manuel, Brittany Elmslie, Emma McKeon, and more.

Who doesn’t scratch tonight? It’s too often the case on Sunday.

That was their finals this morning, ala Sun in the 400 yesterday.

Adrian just has a short drive back to Berkeley. He had a nice morning swim but this is the last time up before trials and I think racing helps. Also how can we expect swimming to grow if the best swimmers don’t stay for finals? We finally get some attention in the Olympic year, need to take advantage of it.

I couldn’t agree more. When you have people paying to see PROFESSIONAL swimmers they need to show up. Phelps also scratched his IM final in Austin. This happens a lot and it happened to me when I took my daughter to a meet last year. I paid for hotel, tickets and plane, but what was worse was to see the disappointment in my daughter’s face when her favorite swimmer scratched because of flights booked early to leave. We will no longer be going to any more meets. This doesn’t happen in other sports.

Fear of not being able to match the morning time.

Yes it does… all the time. The Patriots take Brady out in the 4th quarter in the last few regular season games when they have a playoff spot locked up. The Giants play Buster Posey at 1st pace pretty often, and sometimes even rest him completely (GASP). Starting pitchers only play 1 out of every 5 games. Steph Curry sat out a few weeks in the playoffs due to an injury. They’re doing what they need to do to win… this isn’t strictly entertainment. Maybe take your daughter on saturday, or go to Trials or Nationals where this won’t happen. A local meet or a grand prix meet 3 weeks out from the biggest meet of the season is a… Read more »

Use energy? Trials are THREE weeks away. Less than one minute of swimming energy used last night might possibly be replaced by then.

Bein Sports France broadcasts these US Grand Prix meets pre-recorded. They will not be happy.

They will certainly not. Even I am NOT happy! I wanted to see Adrian again.

maybe they had dinner plans they couldn’t get out of