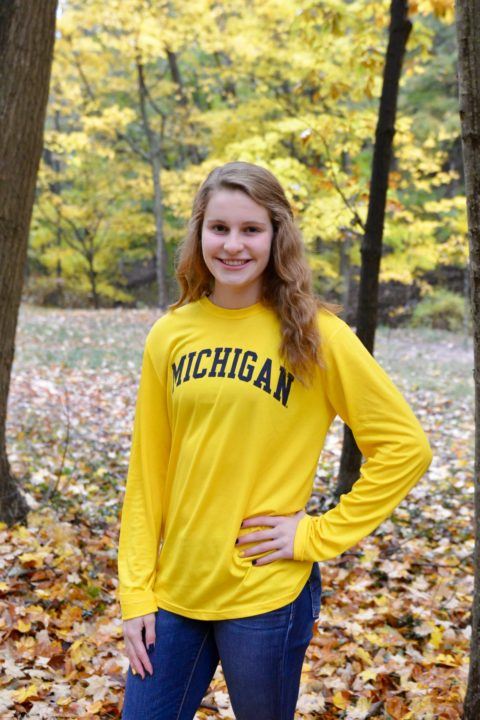 Besides Ackerman (above), Ashley Turak, an Indiana University recruit for next year, threw down a stunning 47.63 to anchor the Farmington - Harrison's relay to victory and new records. That swim will be the last in program history. Stock photo via Amy Ackerman

The 400 free relay was an exciting end to the meet for more than its implications on the final team standings. ington – Harrison won the event with a time of 3:23.51, breaking the MHSAA D1 and ALL-Class records. Lia Munson led off that relay in 52.73, followed by Emma Inch (52.15), and Madeline Greaves (51.00). Ashley Turak, an Indiana University recruit for next year, threw down a stunning 47.63 to anchor the Farmington – Harrison relay to victory and new records. Arguably more impressive, Turak’s split on the first 50 of that 100 was 22.50. Her split on that relay would have been one of the fastest 100 free splits in last weekend’s round of NCAA mid-season invites, which included many of the fastest women’s programs in the NCAA this year.

The split will also be the last in program history, as the school is closing at the end of the 2018-2019 school year.

Turak also led the Farmington – Harrison 200 free relay to victory, also in a new MHSAA D1 record. Turak led of that relay in a blistering 22.10. That time was faster than she went to win the 50 free earlier in the meet (22.20). Possibly more importantly, that time is faster than any senior nationwide in last year’s senior class went in the 50 last year. The fastest 50 freestyler in the class of 2018 was Grace Ariola, who went 22.17. Turak’s time now stands in a tie for 18th in the all-time national rankings for 17-18 girls, coincidentally in a tie with Grace Haskett, who will be her teammate next year at IU. The rest of Farmington – Harrison’s relay was made up of Lia Munson (23.66), Emma Inch (23.91), and Madeline Greaves (23.67), for a final time of 1:33.34, undercutting the previous D1 record of 1:34.37.

In addition to the 50 free, Turak also won the 100 free, swimming 48.72 to shatter the MHSAA D1 record, but ultimately fall just short of the All-Division record of 48.59, held by Kara Lynn Joyce from 2005. Lake Orion senior Claire Abbasse, who will compete for Purdue next season, also came in under 50 seconds, touching the wall in 49.97 for 2nd place.

Kathryn Ackerman (Grand Haven) and Morgan Kraus (Rockford) battled it out in the 100 fly, with Ackerman ultimately gaining the upper hand in finals. Kraus, an Ohio State recruit, led prelims with a 54.40, followed by Ackerman in 55.17. Kraus’ prelims time would actually end up being the fastest time posted at the meet, however, she was just barely off that time in finals. Ackerman swam a 54.42 in finals, narrowly out-touching Kraus, who came in at 54.52. Both times were still considerably off Kraus’ winning time from last year, which was 53.73, and serves as the All-Division MHSAA record. Ackerman, a Michigan recruit, won the 200 IM earlier in the meet, posting a blistering 1:57.25, which lands as the 16th fastest all-time for a 15-16 girl. Ackerman downed her own D1 and All-Division records of 1:57.92, which she set at last year’s state meet.

Claire Tuttle (Hudsonville) edged her winning time from last year’s meet, swimming a 1:01.24 to win the 100 breast. Tuttle shaved off .08 seconds from her winning time last year, which also stood as her best time. Tuttle, a junior, has one last year to chase down Miranda Tucker‘s state record of 1:00.56.

Good God these ladies are fast.

1) It’s Farmington Harrison, not reversed as the article repeats. The story here is that they are closing at the end of the 2018-19 school year. The city voted in 2016 to close in 2020, but ultimately moved that up a year. That :47.63 was the last swim in program history.
2) Michigan outtouched OSU, huh? A harbinger?

Wrong.
It is a combined team of Harrison and Farmington high and goes by Harrison-Farmington Thunderbirds.

Vote Up1-1Vote Down Reply
Get to the wall !