A Look at the Options for Adjusting the 2021 U.S. Olympic Trials Time Standards 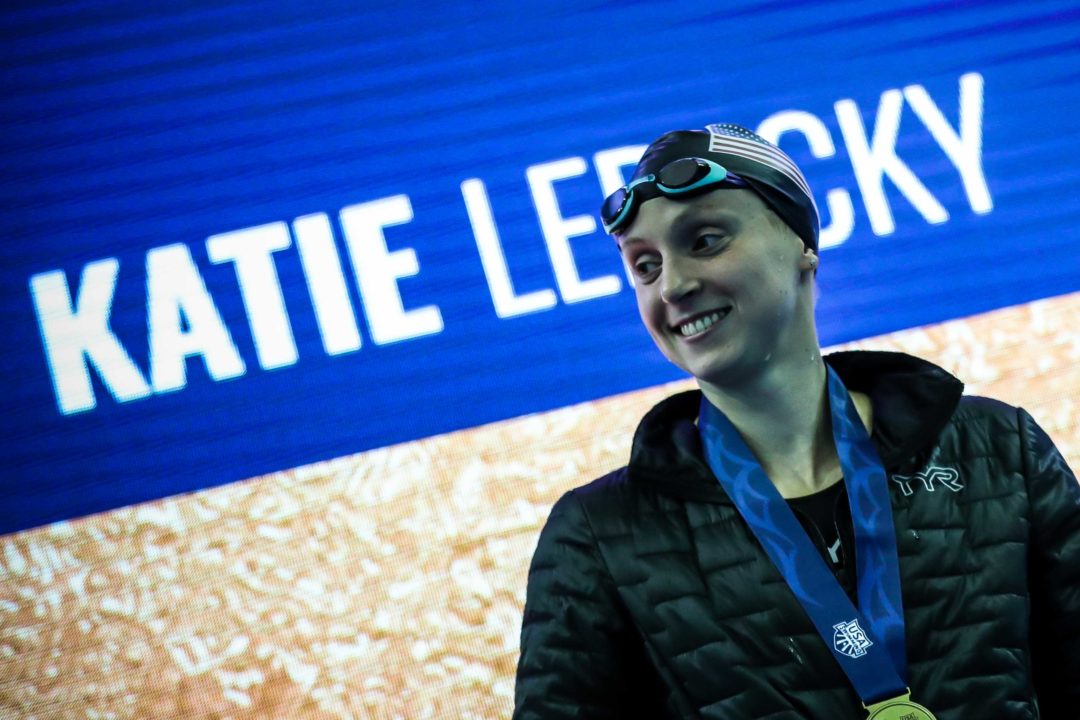 USA Swimming on Friday announced that the new dates for the 2020 U.S. Olympic Swimming Trials, which will now run from June 13th-20th in Omaha, Nebraska. These dates are earlier in a sense: in terms of distance from the Olympic Games (July 23rd-August 8th), they are a week earlier.

In another sense, though, they are 51 weeks later. The latter is crucial for USA Swimming’s event planning. In prior years, crowded warmup pools and long prelims sessions have accompanied Olympic Trials qualifying lists that have numbered nearly 2,000 athletes, among other problems, creating potentially problematic situations when it comes to the meet’s primary stated purpose: choosing the best Olympic Team possible.

For anyone who doesn’t think that warmup pool overcrowding is a real issue – I bring attention to the fact that Elizabeth Beisel fractured a finger in the warmup pool at the 2016 Olympic Trials.

USA Swimming said that they wanted to hit a goal of between 1,200-1,400 swimmers, which they accomplished both by shrinking the qualifying period and making faster time standards. With 1,231 qualified as of today, they were on target with that goal – under normal circumstances, there would’ve still been a few dozen more qualifiers out of spring meets, but some of those qualified wouldn’t enter because they either decide to retire, get injured, or choose to represent another country.

But the extra 51 weeks, depending on how soon athletes are able to get in and resume training, presents a challenge to that goal.

USA Swimming says that they are likely going to leave qualifying open until June, but with a faster set of standards for new qualifiers. To be clear: Swimmers and swims that have already qualified are safe. This only impacts new swims and new swimmers between now and the 2021 Olympic Trials.

There are 3 primary factors in play here:

USA Swimming knows that there’s no perfect solution, and that they can’t please all stakeholders. So the key is to find a balance and figure out how to get as close as possible to the first two, possibly opposing, goals at the same time.

We’ve come up with 2 ways that this problem could be addressed, which we’ve scoped out below in detail. Of course, the 3rd way, that a lot of fringe qualifiers would probably like to see, is to just leave the cuts the same. This is a viable option, but one that doesn’t really need much explanation.

Under this method, USA Swimming could look at the average 15-18 year old swimmer, and figure out how much they normally progress in a year. What does the average 15-year old boy who is going a 23.19 in the 50 free go when he’s 16? This would approximately mirror what the development should be of a young swimmer who was on the verge of getting a qualifying cut in 2020 should have progressed to in 2021.

There could also be a sliding fudge-factor introduced here depending on when practice and competition resumes for most of the country.

This method leans more toward the “fairness” principle in point 1 above, but without going too far and exploding the meet.

This methodology leans toward the purpose of protecting the meet’s primary stated function as choosing the best Olympic Team possible.

Realistically, there are maybe 300 or 400 swimmers with a solid shot at making the approximately 50-swimmer U.S. Olympic Team roster. The vast majority of swimmers are slower than their seed times at the Olympic Trials, and so it’s a near impossibility for a true darkhorse to rise magically up the ranks from a 100 seed to make the team.

The delay of a year shouldn’t preclude USA Swimming, though, from capturing the upside, which is a last-minute qualifier who might capture some unbelievable momentum and make the team. Is it likely? No. But, should there be some protection for the just-in-case scenario? Katie Ledecky hit her Olympic Trials standard in July of 2011, about 11 months before the 2012 Olympic Trials. Then she won Olympic gold in London. So, there’s justification for it.

There are two ways to look at this. In 2016, the lowest-seeded swimmer to qualify for an Olympic Trials final was Jonathan Roberts, the 38th seed coming into the meet. That was a far lower seed than in the previous 3 Olympic Trials meets, where Gary Hall in 2004 made the 400 free relay as the 28th seed. Roberts finished 8th in that 200 free, but with the nature of taking 6 swimmers (usually) per free relay event, he was well within reach of a spot on the team.

Another approach would involve the premise that swimmers who won’t make the Olympic Team this year might be better-prepared with the experience in 4 years. While important, this idea is almost a non-starter looking historically: Caeleb Dressel, at 15-years old, was the 153rd seed in the 100 free at the 2012 Olympic Trials. There were only 98 swimmers at the 2016 Olympic Trials in the men’s 100 free. The jumps from teenagers to college swimmers can be so big and unpredictable in a 4-year cycle, that trying to project and protect in this case would result in lowering the time standards – pandemic or not.

So, we’ll focus on the former approach.

Here’s where things get really interesting: this actually results in less of a reduction of time standards than the prior method on the men’s side. So, counterintuitively, this might be the more balanced approach, at least for men. For women, in most events, it results in a bigger drop.

The big question, what will USA Swimming do? What Mike Unger said in an interview on Friday with SwimSwam’s Torrey Hart makes sense. The answer to that question can’t really be given until we know more about when people are going to be able to return to training and competition.

Most of what USA Swimming has some basis in reality. There’s usually not just a committee that gets together and decides what times look about right, it’s based on the Xth place from the previous year, or an average of X times from the previous X meets, or the current Xth ranked time.

If swimming doesn’t return to some semblance of normalcy until, say, January, the cuts probably won’t move at all, as there’s going to be a rather limited window for swimmers to hit new standards anyway.

As with everything over the past few months, there are far more unknowns than knowns at this point, and time will tell the full story.

It is interesting that you say that the second method results in less of a reduction in the time standards, because for women’s events if done that way, every new time standard except one would be a decent amount faster than in the first method.

These are both interesting and insightful ways to make a decision on the cut lines.

But USA Swimming’s bigger goal should be to figure out how to limit the number of people at the event, to make it easier to actually hold the event in a safe manner, ‘safe’ being defined by whatever government edicts are in place at that moment in time.

If Bill Gates gets his way, there will be no more swim meets until there is a vaccine, and until there is a way to prove that everyone going to an event has gotten the vaccine (or has the right antibodies).

What about keeping the same qualifying times for those already qualified, so if they have one event they have the shot at getting 2 or 3 other swims? Doesn’t add any new swimmers to the meet, and allows for those traveling from all over to get more than one swim in.

That’s an interesting proposal. It would be trickier to administer, and more confusing for people, but not prohibitively so.

Most of the people I see who are upset are swimmers/teammates/parents/coaches of would-be first time qualifiers, though, so I don’t know if that proposal would quell the roar.

There should be no adjustment. There will be a big number that have already qualified that won’t hold on another year. It’s not the swimmers fault they didn’t get their spring meet to qualify!

Making the freestyle cuts much faster for 18 and under boys seems counter productive for development especially if there is not a bonus event system.

Let’s say the 200 cut becomes 1:49, if you’re an 18 and under boy going 1:49 your’re more than likely one of the most promising young swimmers in the country and have a chance to make youth travel teams.

Having these swimmers in a really limited number of events seems like its not helping USA swimming in the long run, especially on the boys side.

My daughter was a week away from going to NCSAs to attempt to get her cut in one of the freestyle distance events. It has always been her goal to make it to Trials. She knows that she has virtually no chance of ever making an Olympic team. I fully understand that the main reason for Trials is to form the best team for the Olympics. But for a very large percentage of the swimmers Trials is the goal. If the times are adjusted down as suggested in the article then those swimmers who were on the cusp of qualifying this year will have virtually no chance next year. A 10 second drop in the 1500 is a huge amount… Read more »

While 10 seconds is certainly a big drop, and I agree that the break will disproportionately impact distance swimmers (probably? Maybe that’s a wrong assumption), it still would’ve taken a whale of a taper for her to hit the Trials cut, don’t you think?

At some point, I might ask myself this: is it more likely that she drops 42 seconds in one year, or 52 seconds in 2 years, when she’s a teenager? In some respects, depending on where… Read more »

Last summer was a lost year due to a fall off a trampoline. But regardless of all that, I still think the underlying point is valid.

If Braden has the correct times then this father does not have a realistic idea of how much swimmers can drop in their taper – probably not on the cusp of making OT cuts.

as a breastroker not sure how distance tapering works, but I dropped 9% in my 2 when I tapered. She only needs to drop 7% to make the cut. I don’t think it’s impossible for her, maybe just improbable.

No one knows today what next summer will be like. Predictions are changing almost daily as data comes out. If this anti body test comes out it will be it will be more