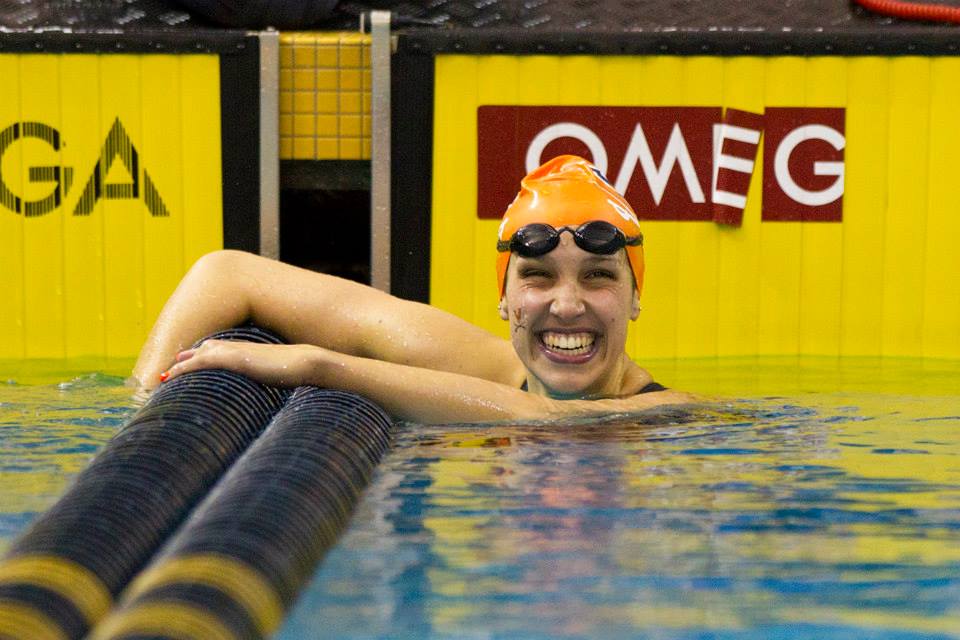 Courtney Bartholomew was all smiles at the ACC Championships, but that smile could be making American history in a few weeks given her conference performances. Archive photo via Todd Kirkland, theACC.com

The first of two huge weeks in Division I conference-level swimming & diving has wrapped, and it was one of the most exciting conference week’s in recent memory. Here are some big-picture things we learned from the week as a whole:

1. Down to the wire across the country: We haven’t had this many conference meets come down to the last few events on the very same night in a long, long time. The AAC came down to the last relay, with the East Carolina men winning the title over SMU in their first season in the American. The Ivy League saw three teams in the hunt right down to the final relay, with Princeton ultimately winning by 22.5. In the ACC, the North Carolina Tar Heels shot to surprising lead over 7-time-defending champs Virginia on Friday night, only to have the Cavaliers track them down on the final day. The Missouri Valley Conference featured Missouri State and Southern Illinois separated by just 8 points heading into the final day before a repeat Missouri State title. The San Diego State Aztecs pulled off the Mountain West win over defending champs Boise State on the final relay in that meet. And the Big Ten saw Indiana and Minnesota trade leads on the final day with the meet once again not decided until the final event. Swimming doesn’t get any more exciting than last weekend, and we can only hope the national championships offer just as much team drama.

2. Who’s saving rest? It’s the question we’ll hear debated to death over the next few weeks: which teams and swimmers didn’t fully rest for their conference meets and should come up even bigger at NCAAs. It’s all speculation at this point – ask fans on different sides and you’ll hear that both everyone and no one shaved down or rested – but times seem to indicate that the top few swimmers from Georgia, Virginia, Indiana and Minnesota were all likely not fully rested. That group would include 2014 NCAA Champions Brittany MacLean, Olivia Smoliga, Emma Reaney and Brooklynn Snodgrass. Then again, history tells us that at least one or two swimmers who didn’t appear fully rested will just turn out to have taken a step backwards in the offseason. We’ll have to wait until NCAAs to find out who.

3. Gkolomeev the new freestyle king? In the first of the major men’s conferences, the SEC, no one was as impressive as Kristian Gkolomeev. The Alabama sophomore made his NCAA champion freshman season look like the efforts of someone who was barely beginning to scratch the surface. His 18.64/41.68 combo in the sprint freestyles make him the instant NCAA favorite, though he should get a good test from Arizona’s Brad Tandy in the 50 and USC’s Cristian Quintero in the 100, among others. But in Gkolomeev, a tall, lanky swimmer who looks to have some elite physical advantages and three more NCAA Championship meets left including this season’s, we might just be seeing the beginning of a truly historic NCAA career.

4. Freshmen more important than ever: Age group swimming in the United States and abroad is faster than it’s ever been, and we’re starting to see that incredible swimming generation affecting the NCAA. Nearly every conference meet had multiple freshmen turning the tables on their more experienced opponents. Princeton won the Ivy title after bringing in our 4th-ranked recruiting class nationally, and Harvard rookie Geordie Enoch was the High Point Swimmer of the meet. SJSU’s Morgan McCormick set a new Mountain West record in the 200 back. Indiana’s Kennedy Goss won two events and nearly propelled IU to an upset title, but for Minnesota’s first-year stud Brooke Zeiger who smashed a nation-leading 4:03 in the 400 IM and came up huge in the mile. Meanwhile in the SEC, Texas A&M’s Beryl Gastaldello was a revelation individually and on relays, and on the men’s side, Caeleb Dressel of Florida did unprecedented things for an under-18 swimmer in the 50 and 100 frees. (More on both of them below). That’s just a few of the big contributors as we enter an era where a few freshmen can instantly rock the landscape of a conference, making recruiting even more vital to a program’s hopes.

5. Worrell & Bartholomew chasing Coughlin: A pair of ACC swimmers appear on the cusp of some legendary American records held by Olympic hero Natalie Coughlin. Coughlin, a former California Golden Bear standout, set both the 100 fly and 100 back marks 13 seasons ago in Austin, Texas, and no one has been able to crack them since. 2015, though, provides our best shot at seeing them fall. Louisville’s Kelsi Worrell was 50.17 in the 100 fly, only a few tenths from breaking Coughlin’s 50.01 and becoming the first woman ever under 50 seconds. Meanwhile Virginia’s Courtney Bartholomew led off the 400 medley in 50.58, about a half-second off of Coughlin’s hallowed 49.97. Even more impressive is that Bartholomew was very likely not fully rested – she went 50.01 at the team’s mid-season rest meet. Both women should have very real shots at the American records at the national championships, where Coughlin could go from holding two nearly-untouchable American records in short course to holding none over the span of just a few hours.

6. Gastaldello the missing piece for Texas A&M: Fourth at last year’s NCAAs on the women’s side, Texas A&M had some major holes to fill after graduating three different NCAA Champions. The 2015 edition of the team still looked capable of a top-5 finish nationally, but still seemed to have a missing piece. When your best swimmer (Sarah Henry) is a miler/400 IMer, it can be difficult to summon up that true relay stud that rakes in the big double-points in post-season swimming. But consider that role filled: French freshman Beryl Gastaldello came up huge over the weekend and instantly makes the Aggie relays a hundred times better. They still probably can’t make a run at the top three teams (Georgia, Stanford and Cal), who are in a league of their own, but a repeat 4th-place finish at NCAAs just became a lot more doable for Texas A&M.

7. Don’t doubt the Florida sprinters: When all-universe high school senior Caeleb Dressel committed to Florida back in 2013, his decision was met with massive consternation from many commenters who were concerned the record-breaking sprinter would stagnate in the high-yardage Florida program. (Seriously, go back and read these comments 15 months later… they’ll make your day). Dressel conclusively silenced the doubters last week with a huge weekend that included new 17-18 NAG records in both the 50 and 100 frees. Florida is still a team built through events like the 200 free and 400 IM, but Dressel’s sheer speed adds a new dimension to the team that should give them a real shot at repeating their 3rd-place NCAA finish from a year ago despite some major graduations.

And while Dressel was blowing out everyone not named Gkolomeev, Florida’s Natalie Hinds was the fastest female 100 freestyler in the individual event on Saturday, and it wasn’t even close. Maybe we’re starting to figure out that head coach Gregg Troy, a multi-time NCAA Coach of the Year and multi-time U.S. Olympic coach, does indeed know how to coach athletes to swim fast. Who would’ve guessed?

8. Ivy Martin & the value of a sprinter: Though the Big Ten became all about the Minnesota-Indiana battle, Wisconsin’s Ivy Martin was the individual star of the meet. Martin won three individual events and four relays in a perfect 7-for-7 senior sendoff in the conference. We talk a lot in recruiting ratings and team power rankings about the relative values of sprint freestylers compared to other strokes in college swimming, but Martin’s value to Wisconsin really drives that point home.

Heading into the meet, it looked like a 3-team battle between Minnesota, Indiana and Michigan, but every night, Wisconsin was somehow hanging right in the lead pack. Martin was that somehow. Combining our ups/downs from all three full days of prelims/finals swimming, Wisconsin earned just 22 scoring swims individually out of prelims, 11 of them in the A final. Compare that to Michigan (16 up), Minnesota (17 up) or Indiana (21 up) and you’ll find a pretty huge difference in potential points. (Each swimmer “up” yields a minimum of 11 points, barring DQs). But Martin’s presence helped Wisconsin do more with less, her three wins and wicked relay splits keeping the Badgers improbably in the hunt night after night. Wisconsin ultimately finished 4th, just 30 points back of Michigan. All that is to say two things: (1) sprinters are absolutely vital in the college swimming format, and (2) if college swimming had an NFL-style MVP award, Martin would have put herself in the running last week.

1ANDA2 you’re right… Because Beryl. Can wait to see what she does when she’s rested.

“And while Dressel was blowing out everyone not named Gkolomeev, Florida’s Natalie Hinds was the fastest female 100 freestyler in the building on Saturday, and it wasn’t even close.”

In the 100 free A Final, yes. Leading off the relay, however, it WAS close.

And much like the NFL MVP award, the college swimming MVP would generally go to the same position (fastest sprint freestyler on one of the fastest teams) every year! 🙂

PK – as a breaststroker, it kills me to say it, but you’re 100% right. We’d be like the JJ Watt of college swimming.

Swimmer of the year the past 2 seasons has gone to Cordes, a breastroker who only competes in 2 individual events. He beat out Vlad Morozov (biggest stud sprinter since Cielo) and de Lucca (winner of 2 freestyle events a year ago). Tom Shields won the year before (Fly/Back specialist).

Based on this I have to disagree with your point, at least in terms of recent history on the national level. Also, teams like Michigan have named distance swimmers (Conner Jaeger) team MVP even when they had great sprint freestylers on the roster.

Derek Mead – I think PK is talking more about a hypothetical award that would follow the same criteria as the NFL’s MVP award: essentially the player who means the most to his/her team, which is the award speculated on in the article itself.

The NCAA Swimmer of the Year award is based on very different criteria – and thank goodness for that!

Gotcha. I think we can all agree Tom Brady deserves MVP no matter how they vote!