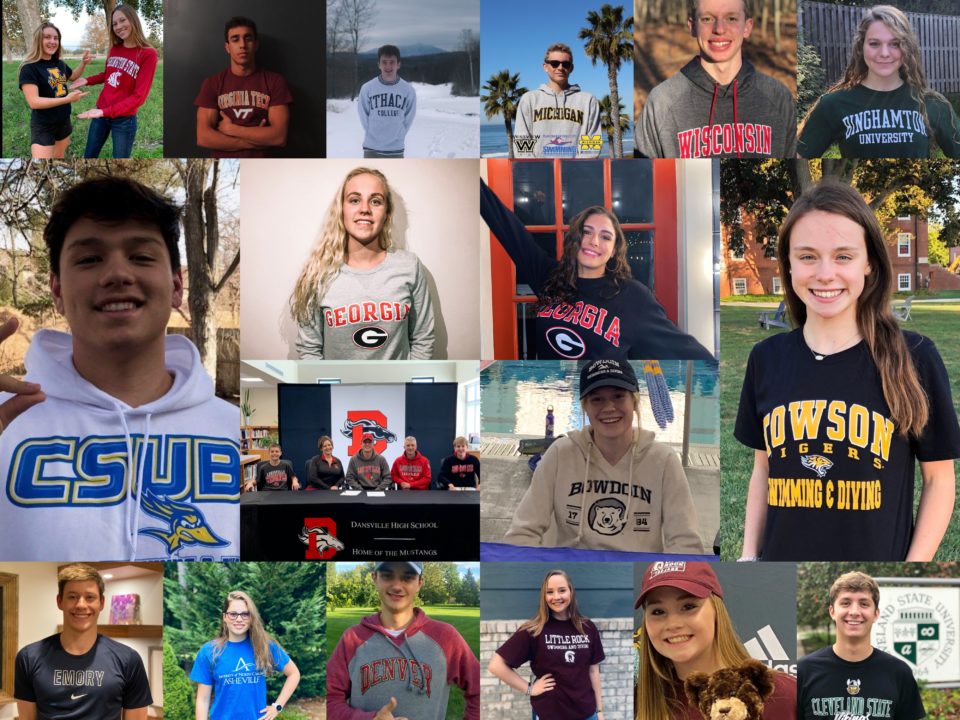 SwimSwam talked to a number of college coaches about the ways that they've had to reenvision recruiting during a quarantine.

The class consists of 13 women and 13 men. “We are very excited to bring in a large class to our Bearcat Family,” head coach Jerry Cummiskey said.

The ongoing coronavirus pandemic nationally and globally has changed the way we think about and do almost everything in our lives.

Within our sport of swimming, in addition to changing the way we train and compete, the pandemic has had a dramatic impact on the way that collegiate programs recruit student-athletes.

While the NCAA has officially extended the recruiting dead period for Division I schools until at least the end of August, the CSCAA has requested that period to be extended for off-campus visits until December and on-campus visits until August. This would mean that coaches and athletes wouldn’t have face-to-face contact for another 5 months, at least.

But with the recruiting period for the class of 2022 open, and with most programs still trying to fill out their 2021 classes, coaches still have to recruit. The rolling cuts of programs means that many swimmers are even looking for programs for the fall of 2020.

Coaches still have to look for ways to get their prospective student-athletes excited about schools and programs without that face-to-face contact, without the recruiting weekends filled with parties and team activities, and without the handshakes and other cultural norms that have developed bonds in society for centuries.

So how has this change impacted recruiting? We talked to a number of Division I head coaches and recruiting coordinators to get their take on what has changed in recruiting during the quarantines.

1. Zoom and Facetime – Yes, these services have always been available, and they’ve always been used to some extent in recruiting. But now that business, school, games, and seemingly every other social interaction has gone online, everyone is becoming way more comfortable with these services and they’re becoming more engrained in our lives. Zoom and FaceTime have replaced regular phone calls as the most common verbal remote communication for most programs.

2. “Virtual” Campus Visits – In its most raw form, a number of coaches have been giving recruits virtual tours via a facetime walk around campus, or sending photos of their favorite campus spots, to prospective student-athletes. If the recruiting dead period bleeds into the fall, or even if it doesn’t and there continues to be some level of discomfort with campus recruiting trips, one coach proposed that this could grow into a full recreation of a normal ‘official’ visit. That would include meeting the staff, meeting the support staff, and meeting the team.

3. No Meets Means More Projecting – In the next few seasons, we’re going to learn a lot about which coaches are really good at projecting swimmers’ improvement curves and which coaches have relied on reputation to grab superstars once they’ve already developed. A huge percentage of swimmers being recruited now lost their taper meets at the end of the 2019-2020 season once everything was shut down in March. For the class of 2022s, that means many best times are still from when they were 14 years old. This is not something we’re really used to in swimming, which unlike “ball” sports are far more objective in evaluating talent. Don’t be surprised if coaches start asking a lot more questions about your parents’ foot size and hand size, rather than just times, as they try to develop new models for identifying top talents.

4. Delayed Commitments – The class of 2022 was already going to be delayed a little by new NCAA rules that put off the contact period until right before the start of their junior years of high school. But now, we would expect the pandemic and quarantine to delay that even more. Without official visits, without meets to show their improvements, athletes may wait until the spring or even their senior year, as used to be the norm, to take trips and make commitments. This will especially be noticeable for top-15 type programs that are used to having almost-complete classes by December of their junior seasons.

5. Discussions about Program Finances – The financial pressures placed on college athletics programs by the pandemic and ensuing quarantine has been well-discussed here and elsewhere, and recruits are getting smarter about it. Multiple coaches, especially at the mid-major level, told me that they’ve been receiving more questions than normal about it. So far, four Division I swimming & diving programs have been cut this off-season (Boise State women, East Carolina men & women, UConn men). While a historic run of cuts, there’s still a general sense that there might be another shoe waiting to drop. Student-athletes are keen to ensure that they don’t get thrust into a last-minute recruiting situation, so they’re asking a lot more questions about financial solvency. Most Power 5 programs, with big state school endowments and giant football stadiums, feel confident about their futures. This leaves coaches in a tough situation between honesty with their student-athletes and hurting their chances at a recruit.

6. Independent Campus Visits – The recruiting dead period doesn’t necessarily mean that you have to commit to a school sight unseen, it just means that you can’t meet with coaches and athletes while on campus. Student-athletes, presuming campuses are open, are still able to take independent campus visits alongside other prospective university students who are not athletes. It’s not quite the same experience, but if that on-campus visit is important to you, then this option is still there, albeit at your own cost. For what it’s worth, this author never set foot on his college’s campus before showing up on move-in day.

7. More Local Commitments – One coach said that he suspected more student-athletes would stay closer to home. In part, this is a dovetail off the above – if a prospective student-athlete isn’t getting an expenses-paid trip to go visit colleges, they’re probably more likely to visit schools close to home, especially ones within driving distance. There’s a bigger idea here, though. After the general chaos that all of our lives were thrown into when the country began to shut down, we are all going to have a natural tendency to seek familiarity and comfort. One way to get that familiarity and comfort is by staying closer to home, closer to the people and places you know, in the pools where you may have raced Senior Champs or Sectionals meets before, and where your parents can rush up to come get you if your campus winds up closing early again.

International students will be forced to leave the U.S. or transfer to another college if their schools offer classes entirely online this fall, under new guidelines issued Monday by federal immigration authorities.

I wonder how this will affect the recruitment of international students. Maybe more students may get opportunities..

an excellent observation, but an inane policy decision IMO

I feel this this definitely effects the 2021 class more than 2022 as many are having to commit without ever seeing the campus, 2022 getting delayed visits their junior year is nothing in comparison to the entire spring, summer, and fall (possibly even winter) recruiting trips and other recruit events being cancelled for 2021. The transfer portal will probably be very large after 2021s freshman year!! 2022 will have plenty of time to take visits, whereas 2021 basically had the fall of their junior year and now many are worried they won’t ever get to take one due to COVID.

My swimmer has started asking the questions about financial stability in her regular phone calls. Follow the schools on social media, read the messages they are sending and determine for yourself who is committed to the students and the athletes and who is backpedaling and reacting at the last minute (cough cough UMASS Dartmouth, etc.)