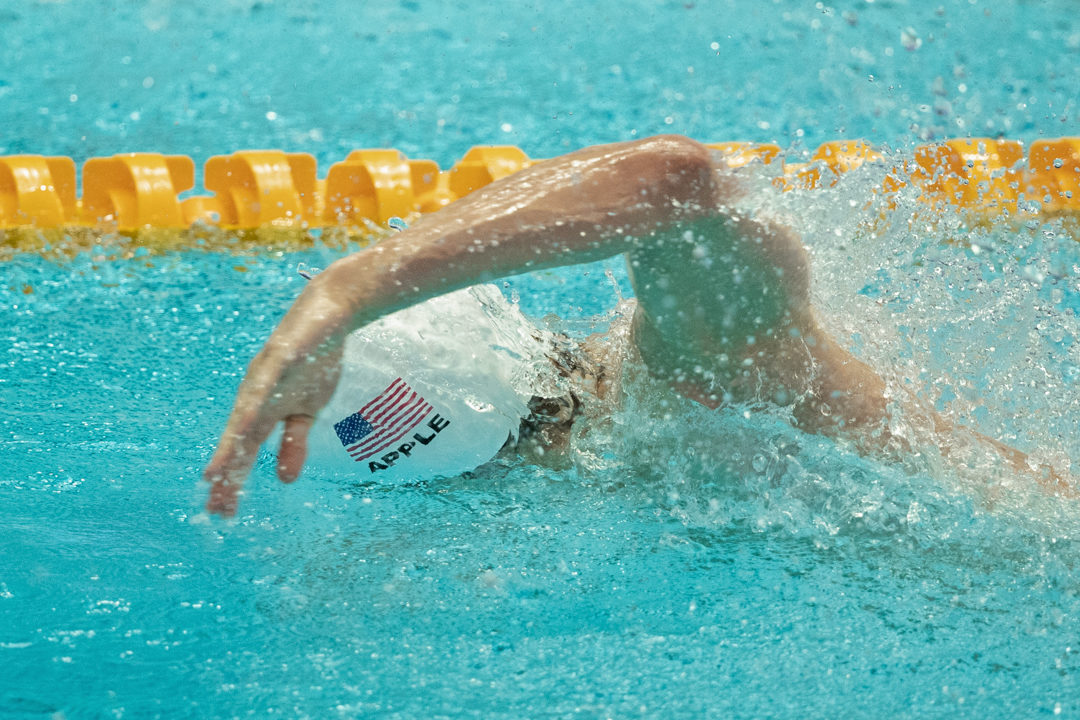 Zach Apple's emergence is a key storyline, along with new potential lineup strategies in the skins, 100 IM, and mixed free relay. Archive photo via “Rafael/Domeyko Photography”

The International Swimming League’s second 2020 match wrapped up today, and we’re learning a great deal about the teams and format for 2020:

Aqua Centurion Szebaztian Szabo is proving to be one of the most impactful free agents in the league this year. A standout for Iron last year (and the #51 swimmer in season MVP points), Szabo joined the Italian-based franchise this year, and ended this meet ranked #9 in the entire league in MVP points. Szabo was the third-biggest scorer of match #2, winning the 100 fly (49.93) and 50 fly (22.00), taking second in the 50 free (21.06), and third in the 100 free (46.63).

Szabo also led off a free relay in 46.83, split 49.7 fly on a medley relay that nearly won, and split 46.4 on a mixed free relay. Szabo could also see his scoring surge if butterfly is ever chosen for a skins race.

2. Relay Jackpots Are Rare – And Less-impactful

The relays count double in the ISL format. But we’re finding out that they’re less valuable with the new jackpot rules. We saw no relay jackpots in the first match given the large jackpot margins, typically ten seconds or more. In the second match, we did see a jackpot in the women’s 4×100 free relay… but it was London jackpotting themselves with no impact on team points. London also jackpotted the DC Trident in that race, but stealing just four points isn’t the kind of game-changer we see when an individual jackpots four or more other swimmers.

In the NCAA, years of production have entrenched certain schools as “breaststroke factories” or “distance powerhouses.” We’re starting to see that form in the fledgling ISL with the London Roar’s backstrokers. Last year, Guilherme Guido and Minna Atherton were among the biggest breakout stars of the format. Atherton is out this season along with most Australians, but London picked up right where they left off, even without Atherton.

The Roar won 6 of 8 backstroke races, including both skin events. That yielded 218.5 total points, more than a third of London’s total team points:

With jackpot rules in place, each round of the skins now carries scoring value. For teams with two top-level entrants, that could lead to a new strategy: one swimmer going all-out to pile up early jackpots while the other saves energy for the final.

London might have provided the blueprint in the men’s 50 back skin race. Guilherme Guido led the first two rounds with times much faster than he needed to survive the cuts. But he also piled up 6 jackpot points in the opening round. And if that early speed ultimately wore Guido out too much to make the final or to contend in the final, his teammate Christian Diener mostly cruised the first two rounds, doing only what he had to to make the cuts. He ultimately won the final round by a wide margin. Here’s a look at their times and scores by round:

Diener clearly held back in the opening rounds – he was 22.76 in the individual 50 back. But because Guido was trailblazing out front to secure the jackpot points, Diener was able to keep his 50s from dropping off too dramatically by round. Guido, meanwhile, went faster in the opening skin round than he did in the individual 50 back yesterday (22.90). But his time dropped off dramatically in the final – that synergy of strategy might be the ticket, but only for teams with two really good entrants.

For the future, the only teams we see with entrants good enough to mimic that strategy:

5. We all overlooked the Apple iSprints

American sprinters always have to live in the shadow of Caeleb Dressel. But with Dressel competing in the other group, Zach Apple showed just how fast he’s rising as a sprinter. Apple has been a Team USA standout in long course for awhile, and he was a gamechanger for the DC Trident this weekend. Apple hit times of 21.10 in the 50 free (third place), 45.74 in the 100 free (1st) and 1:42.94 in the 200 free (2nd) along with a relay leadoff of 45.98 in free and relay splits of 45.1 and 45.4 in free.

Here’s a look at where Apple’s individual swims rank across the ISL season so far:

The event lineup changed enough from last season that we’re still figuring out exactly where the stress points are for versatile swimmers. One clear observation from today: the mixed free relay and 400 IM are not a workable combination.

There is a session break right after the mixed free relay and before the 400 IMs. But it’s a tough double, especially for the women, who swim their 400 IM right after the break. Today, London tried to use Sydney Pickrem on both and the Aqua Centurions did the same with Valentine Dumont.

Pickrem split 55.1 on a relay that ended up in last place and could have been four seconds slower without getting jackpotted out of points. She went on to go 4:37.31 for 5th in the 400 IM. In three showings last year, Pickrem was 4:26, 4:27 and 4:33 – the faster two times would have won the IM today and even the slowest would have moved her up a spot.

Dumont struggled to 8th place in 4:49.07. She didn’t just get jackpotted – she was 8 seconds away from even the jackpot margin and missed the cutoff time badly. So not only did her one point get jackpotted away, Dumont also lost a point for missing the cutoff. She was actually pretty good on the relay (53.3 split on the third-place relay), so the Aqua Centurions are probably better off keeping her on the relay and finding someone else to swim the IM.

London’s Alia Atkinson took second in that IM. Iron’s Jenna Laukkanen was third, and other breaststrokers Bailey Andison (5th), Miranda Tucker (6th) and Arianna Castiglioni (7th) dotted the field for the women, while Fabio Scozzoli (5th) joined in for the men.

We didn’t see as much of that in match 1, but it might be a wrinkle that teams can start to exploit as the season goes on.

-Strategy plays a huge role in the ISL. For example, resting swimmers for a bigger event, which DC trident did with Perry (for the 4×100 mixed relay) or Mack (taking her out of the 100 back to make her swim less events before skins.) Teams need to be careful not to put swimmers in too many events (Andrew) or back-to-back events (Pickrem/Dumont).
-Pianos are a common themes in the 200s (both meets so far). Many early leaders faded to 7th or 8th.
-Some swimmers get better as the meet goes on, and some get worse. For example, Hosszu and Dressel struggled on day 1 but won twice on day 2, and possibly some event winners on day 1… Read more »

1) Certainly strategy plays an important role. We saw that on relay line up’s as well. Jackpots plus skins stroke selection will make teams load their number one teams with their best swimmers. Of course this seems a good strategy only for teams that have realistic shot at winning a relay so if their second team gets jackpotted points will end up on the same team. Pickrem will not swim the relay before 400 IM again, if Anderson comes in as expected. Maybe the same for Dumont’s 400 IM when Pirozzi returns (?). Still Pirozzi will most likely have 200 fly before but there were a few swimmers that did the double today. Same case was Lanza who swam 4… Read more »

Or you could just brute force the whole meet with strong swimmers.

But for instance Murphy would be 3Rd on 50.back here and on match 1 he had jackpot on almost the whole field

We should wait for all times compared

Roar should’ve stuck Large or Atkinson in the mixed relay. Putting Pickrem on a B team that was never gonna score well was a big waste when Large had already gone a similar time to Pickrem in the 4×100 free.

I said this last year and it got downvoted-but I really don’t think there should be 2*4X100 Free Relays per team. The 2nd relay showcases depth sure, but to the casual fan, it’s too much to keep track of (especially when they don’t even list who’s in the event). The audience’s mindset is biased towards the fastest people. For individual events, this can make for excitement/drama since folks in lane 1 have a legitimate shot at winning 1st. For a relay though even in the unlikely event that the B relay beats the A relay, does anyone really care? Isn’t that the reason the olympics got rid of the B final?

On that note, FINA/IOC do actually do somethings right… Read more »

What is considered a “session” in these meets? The 100 breaststroke took place later in the meet, despite references to there being no breaststroke events in the same “session” as the 100 IM. Just looking for someone to clarify

Each day’s events are broken up into three sessions with competition breaks in the middle. You can see the full 6-session breakdown here: https://swimswam.com/full-scoring-format-for-the-2020-isl-season/

Roar is clearly a level and a half above all other three teams in this meet which clearly indicates semi finals at bare minimum but perilous drawing any wider gauge as to their relative standing across the entire league until they face Energy and the 2 stronger US teams.

They appear to have plugged the majority of holes caused by the withdrawal of their AUS contingent; in some cases very well but I suspect they’ll feel the absence of the likes of McKeon, C1 & Atherton on the women’s side and Chalmers, Graham & Winnington on the men’s when the matches get tougher; both on the score of individual races and greater relay security.

As for Iron, Trident and Centurions;… Read more »