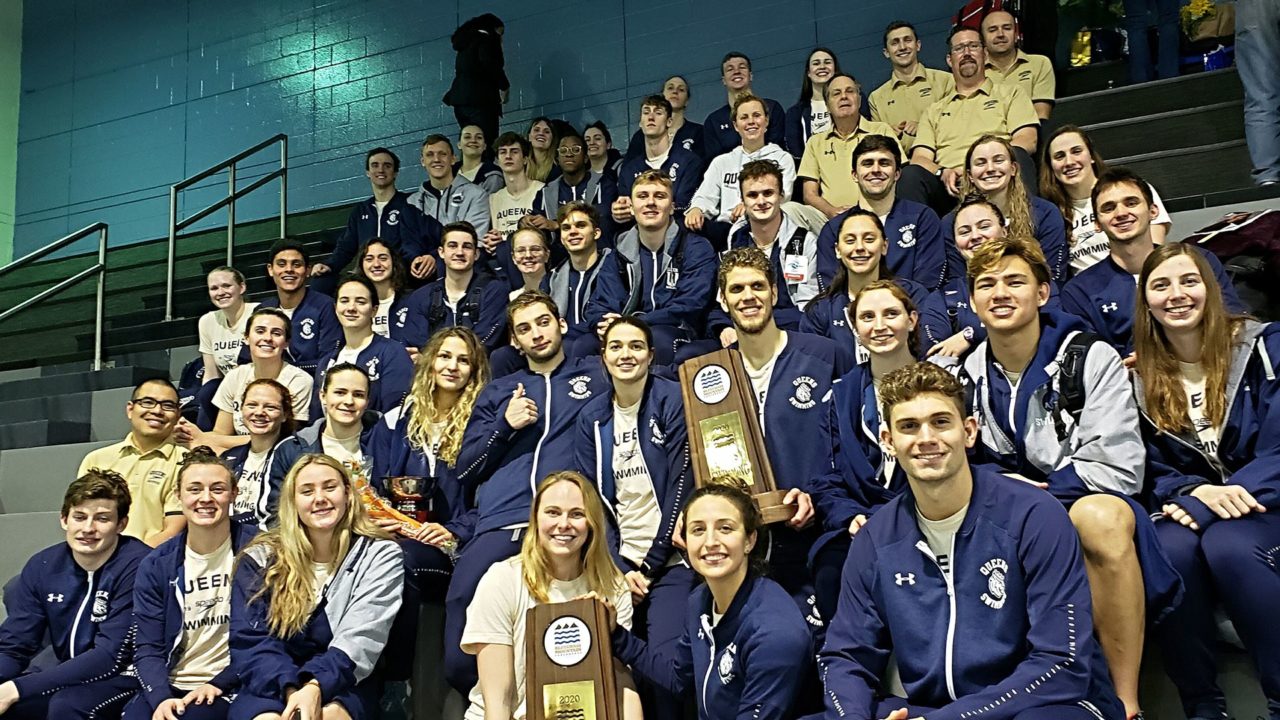 The Queens (NC) Royals won't have to travel far for their 2020-2021 NCAA schedule: all of their meets are within 2.5 hours of Charlotte. Archive photo via Queens Athletics

Queens University of Charlotte, whose men’s and women’s teams have each won 5 straight NCAA Division II Swimming and Diving Championships, have announced their 2020-21 schedule. The Royal’s schedule will feature six dual meets, as well as a mid-season invitational and postseason competition.

Aside from the NCAA Championship meet in March, none of the team’s dual meets are more than a 2.5 hour drive from Queens’ campus.

While Queens usually has a relatively-local schedule, last year they took a 4 hour trip to Atlanta and a 3 hour trip to Blacksburg, while the season prior they swam at Rutgers in New Jersey for their mid-season invite.

The team will kick off their season with a home meet against fellow Bluegrass Mountain Conference (BMC) member Lees-McRae on November 6th. Two weeks later they will travel to Wingate University, another member of the BMC, for a dual on November 20th. McRae is just over a 2 hour drive for Queens while Wingate’s campus is only half-an-hour away, as we’re seeing schedules nationally loaded with more ‘local’ meets this season.

Following nearly a month off from competition, the Royals will once again travel to Wingate, this time for a three-day invite from December 16th to 18th. It’s unclear so far which teams will be at that meet.

Starting off the new year, Queens will compete in three meets within three days. They will start by hosting Catawba College on January 7th (less than an hour away), where the women’s meet will be joined by UNC Pembroke to make a tri.

The next day (January 8th) Queens will host the Lenoir-Rhyne Bears (who will only have about an hour on the road). On January 9th Queens will wrap up their busy week, traveling to take on the Duke Blue Devils in Durham, North Carolina, about a 2 hour drive.

The Royals will wrap up their season with a final road meet when they travel to the University of South Carolina on January 21st, which is about a 90 minute drive.

The Bluegrass Mountain Conference Swimming and Diving Championships are currently scheduled for February 11-14 at the Mecklenburg County Aquatic Center in Charlotte, North Carolina. The Royals have held both the men’s and women’s conference titles for the past six seasons.

The following week Queens will host a three-day meet, the Royal Open, at their home pool, the Levine Aquatic Center.

The D2 NCAA Swimming and Diving Championships are set to take place at the Birmingham Crossplex between March 10th and 13th. The dates and plans for the NCAA D2 National Championship meet have not yet been confirmed amid the ongoing coronavirus pandemic.