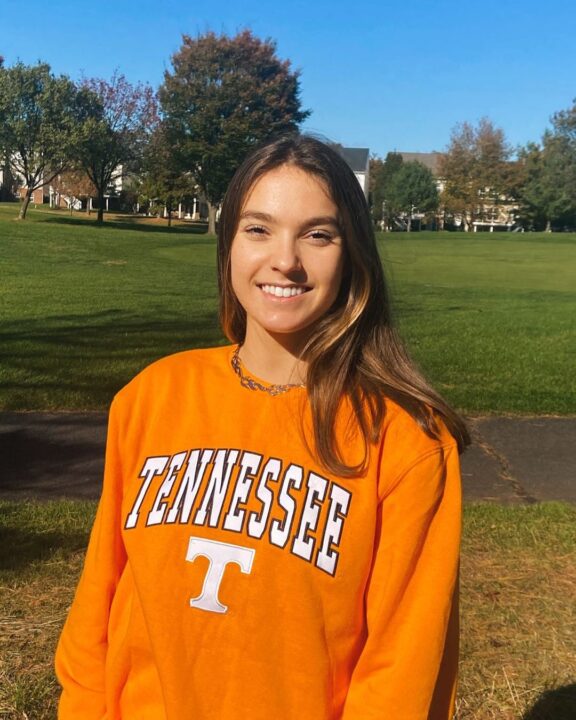 Camille Spink, the fastest 50 and 100 yard freestyler in the high school class of 2023, has verbally committed to the University of Tennessee.

Junior National Team member and #5 recruit in the class of 2023 Camille Spink has verbally committed to the University of Tennessee.

Spink’s commitment on Wednesday came just a few days after a huge meet over the weekend that saw her swim lifetime bests in 6 events.

Spink is the top sprinter in a distance-heavy class of 2023, and has the best times in the class in both the 50 and 100-yard freestyles.

Spink is also the defending 50 and 100 yard free champion in Virginia’s Class 6A, for the state’s biggest high schools, from last season as a sophomore. In February 2020, as a freshman, she won the 100 and 200 freestyles. That means she is a perfect 4-for-4 in individual events so far in her high school career for Battlefield High.

Spink was also a member of the U.S. Team that traveled to compete at the FINA Swimming World Cup meets in Budapest and Berlin in October. In Budapest, she made one final, in the 50 backstroke, where she finished 8th in 27.58 (in short course meters).

She joins a Tennessee women’s team that could make a top 5 run at this year’s NCAA Championship meet, but that will be looking for ‘next’ after a lot of transfers and 5th year graduate students exhaust their eligibility.

Tennessee has a fairly-small class of 2022, likely because they have a lot of scholarship money tied up with their transfers, but that class also includes a 22.6/49.3 sprinter Julia Burroughs, so the Volunteers are definitely rebuilding with a very fast nucleus of sprinters, with Spink now becoming the focal point of that group.

Spink joins a class of 2023 that includes Tori Brostowitz of Wisconsin, a 1:00.9 breaststroker; and another northern Virginia product Molly Blanchard from Poseidon Swimming, a 2:01./4:16 IMer. Blanchard swam at the same NOVA meet as Spink over the weekend, and she too posted five new lifetime best swims.

Along with Sophie Brison, a 54.4/1:55 backstroker, the Volunteers are putting together a top-10 caliber class for 2023 already.

What about the poor men?

Thought I was having a good day when my Tennessee shoes arrived this morning, but things just got much better.

Huge pickup. I think every team is looking for “next” but weird disregard to the #2 ranked freshmen class on campus now. This article makes it sound like the cupboard is bare.

I’ve got a feeling this class isn’t done yet either. 🙂 Couple of nice sprinters still on Tennessee’s board.

Impressive class Tennessee has put together with Brostowitz, Brison, Blanchard and now Spink