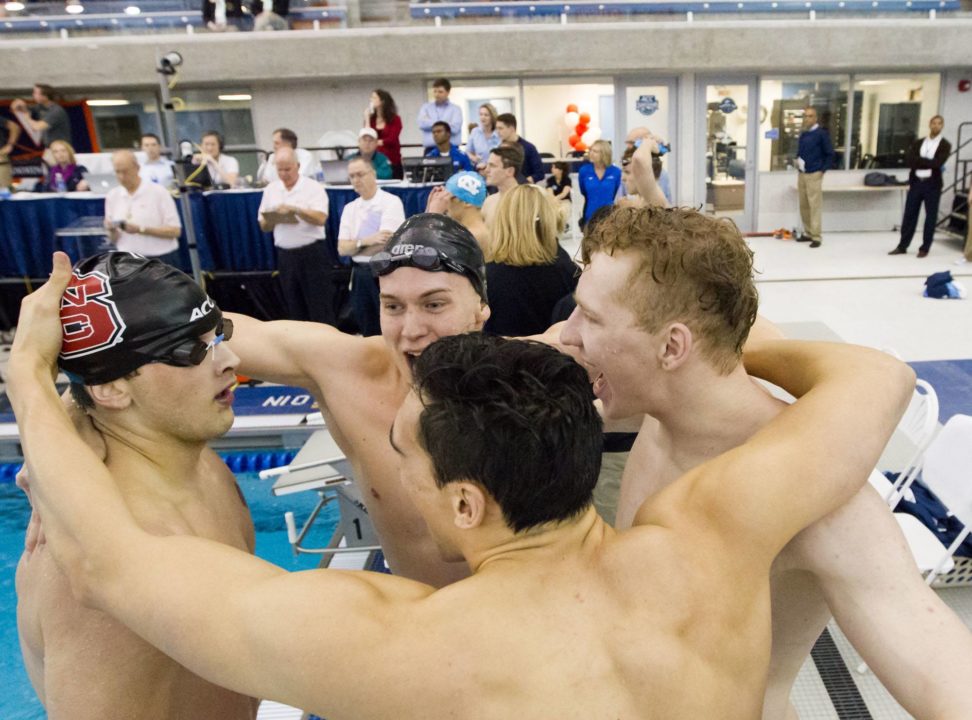 The 2015 Men’s ACC Swimming & Diving Championships have come to a close, as the fourth and final night of competition has concluded from the Georgia Tech Aquatic Center.  Tonight’s races continued the meet’s overall themes of record-breaking performances, NC State freestyle dominance and Louisville breaststroke prominence. Below are our 5 Big Things from Day 4, as well as the ACC Championships as a whole.

What else can be said about a team that just earned its 25th ACC title in league history?  The team’s overall depth, freestyle prowess and relay domination were its key assets in beating would-be challengers such as Louisville, UNC and Virginia Tech into submission.

Tonight, the Wolfpack of NC State has won its first champion since 1992 by claiming first-place finishes in 10 of 21 events over the entire championships, including 4 out of the 5 relays.  22 medals were reaped by the team across the 4 days of competition, as was cap-stoned by the team’s ACC record tonight in the final event, the 400 freestyle relay.

Incredibly, by the end of the championship, NC State had won all 5 of the individual freestyle events, in addition to the 3 freestyle relays.  In fact, NC State was the first institution to sweep the freestyle events since Virginia performed the same feat in 2002.  NC State’s 8 golds were earned by Anton Ipsen (500 and 1650 free)  Simonas Bilis (50 free, 100 free, 200 free), and the collective victories across the 200, 400 and 800 free relays.

Increasingly proving its stature within the ACC in the weeks leading up to this weekend’ championships, the University of Louisville Cardinals proved, without a doubt, that they are more than just an up-and-coming program; they, indeed, have already arrived.

The Cardinals’ biggest night came about on Friday, where the team started a point grabbing tear with junior Nolan Tesone’s thrd-place finish in the 400 IM.  His time of 3:43.61 set a new school record and set the tone for the Louisville men for the entire evening.  In the very next event, the 100 butterfly, Cardinal junior Pedro Coutinho blasted a 45.92 from lane 9 – talk about outside smoke – to grind his way to the top of the podium, surpassing favorite Connor Knight from FSU in the process.  In light of this being Louisville’s first year in the ACC, with his title-winning swim, Coutinho can now claim to be the first male ACC champion in any sport.

The Cardinal streak continued on Friday night with senior Thomas Dahlia somewhat surprising the field with his 100 breaststroke title-winning swim.  A Peter Kropp DQ bumped another Louisville senior, Addison Bray into the 3rd-place spot with his time of 53.16, merely a foreshadowing of the 200 breaststroke results to come on Saturday (see below).

As if things couldn’t have gotten any better for this ACC newcomer team, sophomore Grigory Tarasevich tore up the field in the 100 backstroke to earn the win in 46.21, beating two NC State big guns in the process (Andreas Schiellerup and Hennessey Stuart).  The Cardinals would then  conclude Friday night with a huge 400 medley relay win in 3:06.06, which set a new Louisville school record.

By the end of the championships, Louisville earned gold in 5 events and brought home a total of 16 pieces of hardware.  That is the second highest number of medals among the teams.  Yes, the Cardinals have set themselves up nicely for a solid NCAA showing.

As the Wolfpack’s alpha, Simonas Bilis, earned 6 golds and 1 silver across 7 total events, the junior from Lithuania was awarded the 2015 ACC Championships Most Valuable Swimmer honor.  This marks the first time an NC State swimmer has won the award since Cullen Jones in 2006.

Bilis utterly manhandled the freestyle events, taking the 50, 100 and 200 titles by vicious storm, with a new ACC record in the 100 distance.  Bilais is the first swimmer in the ACC conference to sweep all three of these individual freestyle events since Scot Robinson (Virginia) completed the history-making task in 2010.  Bilis was also a missile off the blocks in the team events, with a hightlight as lead-off in his team’s winning 200 free relay, clocking a new ACC record split for his 18.98 effort.

In addition, Bilis was instrumental in that 200 free relay ACC record, as well as the conference records and title-winning swims in the 400 and 800 free relays.  No question, Bilis is a freestyle, relay and overall point magnet, deserving of most valuable swimmer at these championships.

Senior Thomas Dahlia doubled up on his breaststroke wins by taking the 200 breaststroke title tonight in a time of 1:53.51, leading a trio of Cardinals in the top 3 spots on the podium in the event.  Addison Bray stepped foot on the podium once again, this time in the 2nd-place position, as he touched behind teammate Dahlia in 1:54.60.  He was immediately followed by Venezuelan freshman Carlos Claverie, who swam a 1:54.80 for 3rd, making it a 1-2-3 finish for the Cardinals.  The 3 men represented the only swimmers to dip under the 1:55 mark of the field.  After this huge point assault, Louisville moved into 2nd place behind NC State; a position they would not end up yielding.

A Louisville sweep of the breaststroke events is not exactly new territory, as the Cardinals accomplished the feat against both Cincinnati and Kentucky in-season.  However, accomplishing this same feat on an overall conference scale, against the best breaststrokers from the ACC’s top programs truly says something significant about the work Coach Albiero has been doing down in Louisville.

Over the course of the entire meet, 8 new conference records were set across all of the teams, which simply points to the overall elevation of this conference in terms of speed and depth.  As a team, ACC team title winner NC State was responsible for writing 6 of those 8 new records into the history books, with new marks in the 200, 400 and 800 freestyle relays.

Bilis broke the 100 free conference mark with his stellar performance of 41.94 in the individual race, but, as mentioned, also clocked a new record in his 50 free lead-off from the 200 freestyle relay (18.98).  A Wolfpack freshman also got in on the record-breaking action, as Hennessey Stuart topped the field tonight in his impressive 1:39.27 200 backstroke ACC record-setting performance.

NC State wasn’t the only program to re-write ACC records this weekend, however.  Florida State’s Connor Knight raced his way to a new mark in the 200 fly, winning the title in 1:41.66.  And, although Duke’s Peter Kropp was disqualified in the 100 breaststroke final, he was able to swim a record-breaking race in the morning prelims of that event, earning a new ACC conference cord of 52.17.

Wow very fast meet. Way to go Nc State! Kind of sad to see UVA go from winning 6 years in a row to being 8th this year. It will take a very long time for them to rebuild to the level that they once were.