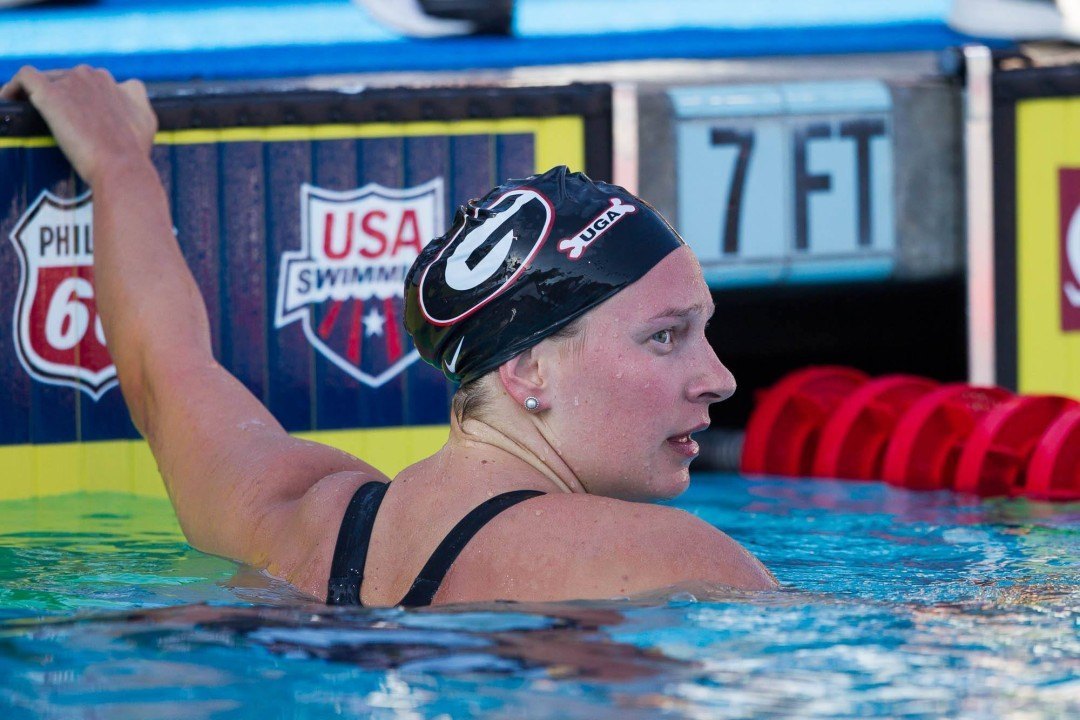 Melanie Margalis had quite a double today, earning new best times in both the 200 free and 100 breast and getting a win in the latter race. Archive photo via Tim Binning/TheSwimPictures.com

Rising Indiana sophomore Lilly King was expected to compete in her signature 100 breast today in Indy, but was a no show this morning.

It’s unknown whether or not something happened to King to prompt her absence today, but this would be her last time to swim this race at a big-time prep meet before the Olympic Trials. King swam a stellar 1:05.73 at the last Arena Pro Swim Series stop in Charlotte last month, but didn’t back that up today.

The women’s 100 breast is looking treacherous as the Olympic Trials draw closer– while King has been the fastest this year, there have been a growing number of sub-1:07’s from the American ranks. Sarah Haase, for example, torched a 1:06.31 this morning at the Santa Clara PSS meet.

This morning, rising UVA senior Leah Smith further legitimized her contention for the USA 4×200 free relay in Rio with a 1:56.66 in the 200 free prelims.

Tonight, though pushed hard by a fiesty Melanie Margalis, Smith stayed strong and turned in yet another new personal best– 1:56.64. No, it’s not a huge drop from the morning, but it was her 2nd time under 1:57 ever. Three of Americas current stars, Katie Ledecky, Allison Schmitt, and Missy Franklin, seem to be pretty certain members of the foursome, and Smith’s consistency in this race in LCM after NCAA’s make her a favorite for the fourth spot on that relay.

All of the taper arguing aside– it’s June 3rd. Smith is not lights out or fully rested right now. Two best times in one day for her is very impressive, and there’s no reason to think that she won’t be right on the heels (or hips) of the powerful aforementioned trio in Omaha.

Putting up two big swims tonight was Dynamo’s Jay Litherland. He first propelled himself to victory in the 200 free with a 1:48.41, winning the race by more than a second over a bunch of Big Ten post-grads.

Litherland isn’t primarily a 200 freestyler, though, and he won by a much bigger margin (almost four full seconds) over UGA teammate Gunnar Bentz in his bread-and-butter event, the 400 IM. Finishing at 4:13.93 to Bentz’s 4:17.20, Litherland put up the 12th-ranked time in the world, and was just over a second behind the top American times done earlier in the year by Conor Dwyer and Ryan Lochte. Litherland looks to be in great shape heading into Omaha, which is exciting for him as the 400 IM spots for the U.S. Olympic team are definitely not locked down by any heavy favorites.

Despite just two heats of the men’s 200 free (two minutes each) and then a heat of the women’s 100 breast (just over a minute) in between Melanie Margalis‘ two races tonight, the UGA alumna lopped big time off of both of her morning swims.

She first challenged Leah Smith in the 200 free, putting up a very strong 1:57.33 for a new best by almost six tenths. That time certainly makes her a prime candidate for a spot (if only for Rio prelims) on the American 4×200 free relay this summer, especially if she can improve on that in Omaha.

Margalis dove back in no more than ten minutes later, and was at the front of the 100 breast pack for the entire race. She shut everyone else down on the 2nd 50, including top prelims swimmer Andrea Cottrell, for the win at 1:07.26, taking 1.33 seconds off of her own prelims time and almost a tenth off of her best time. Her best event, the 200 IM, is yet to come. If she swims anything like how she performed tonight, she should put up a great time in that event on Sunday.

Nic Fink of Athens Bulldogs swam a strong 59.93 this morning. That was his third time under a minute, while the only other two times were at the 2015 World Championships. Essentially, this is his best “non-championship” swim ever.

Fink, Miller, and Cordes are three of America’s top breaststrokers, and they’ll clash again in the 200 breast later in the meet as well as in both of the breaststroke races in Omaha. These three, along with Andrew Wilson, have all been under the minute barrier in the last year.

It’s pretty hard to choose a favorite, as there hasn’t been a ton of consistency in terms of sub-minute performances with these four, but the race we saw in Indy is just a preview of what’s to come in Omaha. Fink, Miller, and Cordes were very bunched up, which foreshadows what will probably be an incredibly close finish in the final in Omaha.

For Rafael….
A focus on your favorite US swimmer, Cody Miller. 😉
http://www.usaswimming.org/ViewNewsArticle.aspx?TabId=0&itemid=15679&mid=14491

Karl, about Melanie Margalis. Really strong times both in about 10 minutes. Do you know, that A,B,C,D finals were in Indy?

Yes! But they run through A and B flights first before any C and D finals are contested. So, she had the A and B final of the men’s 200 free and the women’s 100 breast B final in between her 2 free and 1 breast.

Karl-
OK thanks. I try to follow 6 different meets, it’s not so easy…

Stellar double for Margalis considering her events were only 10 minutes apart. Not to mention $1.5k in prize money! Rooting for her in Omaha