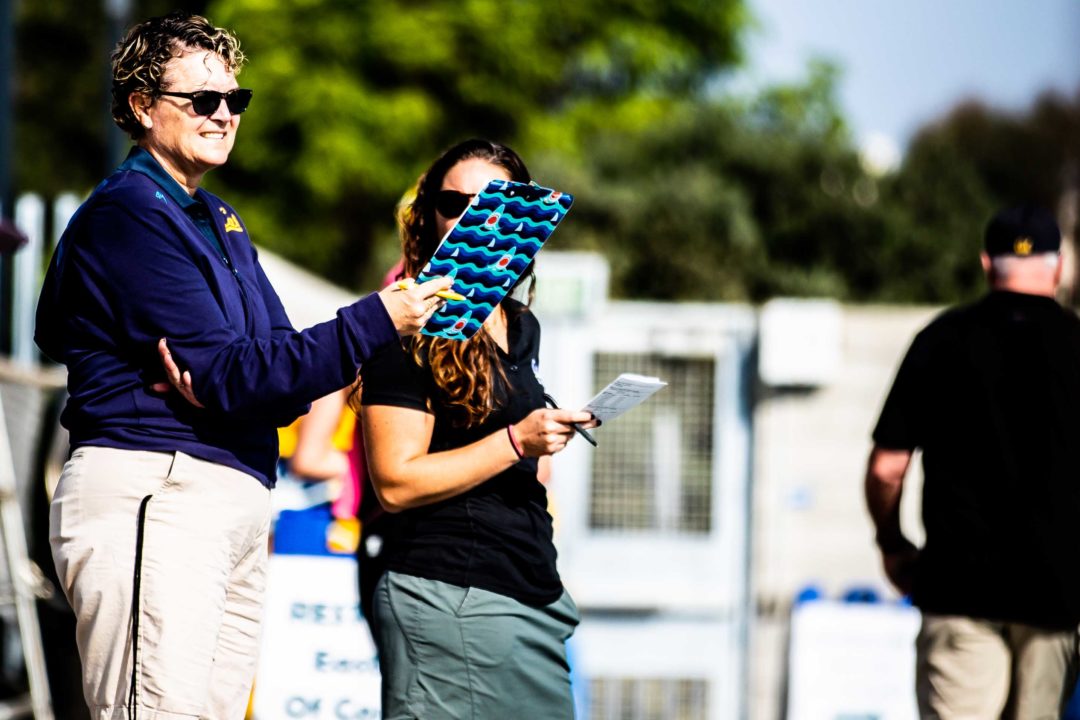 Current Cal fifth-year senior Alicia Wilson was one of nearly 50 supporters of Teri McKeever who wrote letters that were sent to the university's counsel. Archive photo via Jack Spitser/Spitser Photography

A number of former swimmers, ex-college coaches and various members of the swimming community have spoken out in support of Teri McKeever.

A total of 48 people have written letters supporting McKeever, according to a report Wednesday from The Orange County Register, which have been sent by her attorney, Thomas Newkirk, to the University of California’s counsel as part of a campaign coordinated by Newkirk to show support for McKeever.

McKeever was placed on administrative leave by the university in May after allegations of verbal and emotional abuse from a number of her current and former swimmers surfaced.

Over the past several months, more than 40 current or former Cal swimmers and divers, 17 parents, a former member of the men’s swimming and diving squad at Cal, two former coaches, a former Cal administrator, and two former Cal athletic department employees have come forward to the SCNG with stories of McKeever’s bullying.

Among the most noteworthy supports of McKeever is Alicia Wilson, a current fifth-year senior on the Cal women’s team who entered the NCAA transfer portal earlier this season and is not competing with the Golden Bears this weekend at the Minnesota Invite.

“It has been so distressing to have my coach, my idol, and a mother figure taken away so quickly and wrongfully targeted by girls I used to call my teammates and friends,” Wilson wrote in a letter addressed to Cal Director of Athletics Jim Knowlton, according to The OC Register.

Wilson’s was one of 17 letters provided to a Southern California News Group (SCNG) by Newkirk, which reportedly includes more former swimmers, ex-college coaches, parents of former Golden Bears and various members of the swimming community McKeever has encountered over her 29-year career leading Cal.

According to The OC Register, supporters portray McKeever as a “groundbreaking coach who is the victim of gender bias and of athletes who don’t want to be held accountable for their shortcomings in the pool.”

The supporters also include Jill Sterkel, a four-time Olympic medalist and longtime college coach who said she agrees with the idea that McKeever is a victim of gender bias.

“I absolutely subscribe to that,” Sterkel said. “I was a female coach for a long time. I got the crap beat out of me too. People just (were) talking because I was a female. Assumptions that were made that were completely false, And it’s hard, it’s hard. You’re out there completely by yourself. You’re almost on an island.”

Newkirk said the letters undercut the allegations made against McKeever and expose what he and supporters have characterized as “a pampered generation of female college athletes and a double standard in how female and male coaches are viewed and judged,” according to the OC Register.

“It is a trend for a handful of disgruntled student-athletes to complain about a coach and accuse the culture of being toxic, when in reality, the other 90 percent are perfectly happy,” former Purdue head coach Cathy Wright-Eger wrote, according to The OC Register.

“Unfortunately, the small handful, along with their parents and unprofessional reporters are being louder and ruining the careers of many coaches. It is happening every day in collegiate athletics and I would be devastated to see this happen to Teri McKeever.”

“As a women’s coach, I have seen years of immature athletes who take on the role of ‘mean girls’ and become toxic and hateful, which is what I believe you have on your hands right now,” said Teeter, who coached at the NCAA Division I level for 45 years.

“This generation of athletes seems to think if they don’t get their way, they will create a way to deal with whoever stands in their way. Not only athletes, but many of our male colleagues who are jealous about Teri’s success and ability to coach women to the Olympics, when they, as coaches, can’t seem to get the job done.”

The OC Register notes that 15 of the 17 letters provided to the SCNG were addressed directly to Knowlton, though Newkirk sent them to the university’s counsel.

Cal assistant vice chancellor Dan Mogulof told The OC Register Knowlton has not received any such letters, and that the school has “no comment regarding information or correspondence sent to our legal counsel office.”

In August, letters supporting McKeever were sent to Cal Berkeley chancellor Carol Christ alleging that university leadership failed to take action on repeated and credible allegations of abuse and bullying against McKeever. The letters suggested that an investigation into Cal leadership rather than McKeever was the more pressing issue. At the time a legal expert told SwimSwam it’s not unusual for this type of investigation to focus on whether the individual in question committed wrongdoing before addressing any administrative oversight.

Cal has hired an independent law firm to investigate McKeever, which is still ongoing.

Dave Durden, now in his 16th season as the head coach of the Cal men’s swim & dive program, was named acting director of the women’s team in August.

The letters reportedly “echo a conspiracy” from some that Durden had designs on McKeever’s job for years and is somehow behind the controversy, The OC Register notes.

And anytime you add a good conspiracy theory,it usually legitimizes your argument.

Can someone explain who Mike Stromberg is and why he is inserting himself into this drama?

A front page article in sfgate.com, the San Francisco Chronicle’s web page, is titled “Why is Cal swimming tyrant Teri McKeever still employed?” Cal promised that this issue would be resolved in six months and that deadline just passed. For the sake of the team, her victims and the university’s reputation, she needs to go.

As a child growing up, and as an athlete, and now D1 coach, I’ve been teased, harassed, bullied, and abused (even physically by a current D1 head coach (not Teri)). One consistency among these type of people is while they’re doing whatever you tolerate from them, are others who share the same space as you are treated THE EXACT OPPOSITE. Some of these people who could not be worse to me, were at the same time extremely nurturing and caring towards other student-athletes and other coaches. Most people, even those in your corner, usually aren’t aware of what’s happening to you, as these abusers do a moderate job at hiding their targeted abuse and continue on their path as seems… Read more »

Agree entirely. I first heard of the truth about McKeever through SwimSwam. A front page article in the web version of today’s San Francisco Chronicle is titled “Why is Cal swimming tyrant Teri McKeever still employed?”

These testimonials by her peers are nothing more than an attempt to smokescreen the truth via moral accounts of good deeds and ritcheous behavior, all while minimizing/rationalizing abusive behavior by McKeever as if it was the pitiful swimmer’s weak character that was the culprit..

She was abusive, it was dismissed… Read more »

These testimonials by her peers are nothing more than an attempt to smokescreen the truth via moral accounts of good deeds and ritcheous behavior, all while minimizing/rationalizing abusive behavior by McKeever as if it was the pitiful swimmer’s weak character that was the culprit..

She was abusive, it was… Read more »

Were these supporters also abused by McKeever, or no? Can supporters erase abuse? This REALLY makes Cal look bad. And it’s getting worse.

Anyone else watch the pepsi, where’s my jet? Doc?

No doubt, our comments are are being played as the copo (court of public opinion).

Credit to swimswam as the media source that may decide McKeever’s separation package.

As for the Durden conspiracy angle, Cal is not a big 10 or SEC school.