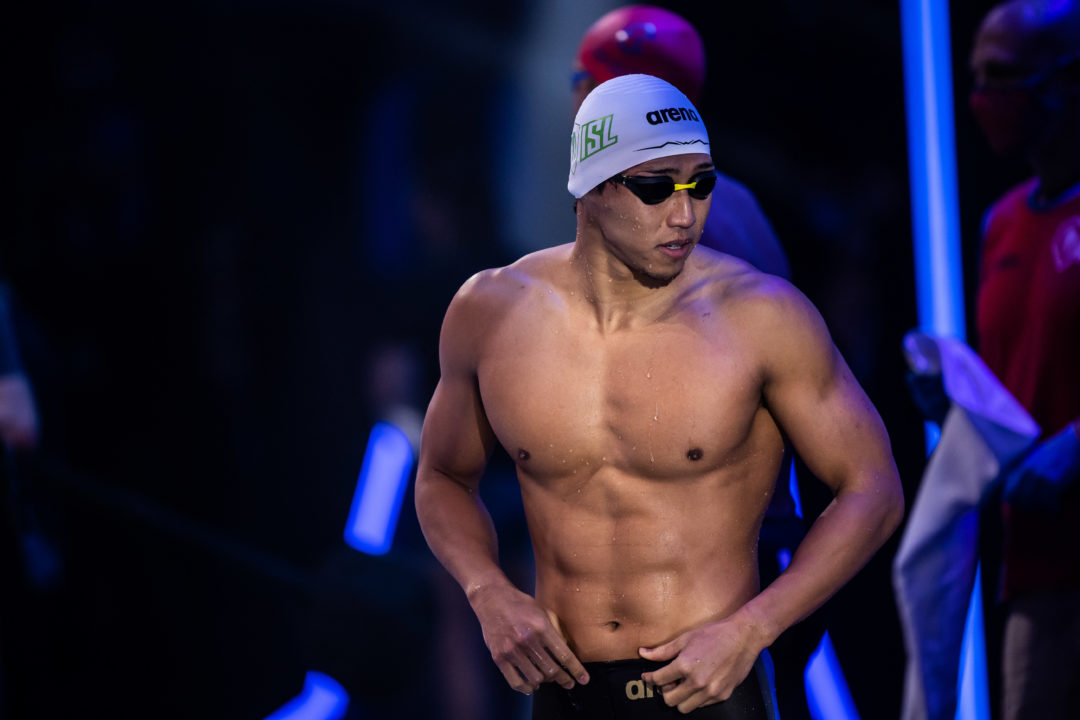 Takeshi Kawamoto was at the helm of a 4-man siege on the 100m butterfly event on the final day of action at the Japan Open. Archive photo via Mike Lewis/Ola Vista Photography

In addition to Shoma Sato‘s monster swim in the 200m breast, as well as Rikako Ikee‘s comeback-best in the women’s 50m free, the final day of the Japan Open brought the heat in the men’s 100m fly event.

Remarkably while competing at the Tokyo Aquatics Centre, site of this summer’s Olympic Games’ swimming action, the top 4 finishers in the 1fly all stopped the clock in the 51-second zone.

The impressive depth included International Swimming League (ISL) Tokyo Frog Kings standout Takeshi Kawamoto putting up his best time ever, leading the way with a 51.28 scorcher. Splitting 23.69/27.59, Kawamoto put the Japanese national record on notice, with that mark resting at the 51.00 Kouhei Kawamoto registered way back in 2009.

Entering this meet, Kawamoto’s lifetime best in this 100m fly sat at the 51.83 he logged just last December. However, his 51.28 tonight hacked over half a second off of that result to check-in as the world’s 4th fastest swimmer this season.

But the man wasn’t alone in producing a high-caliber performance, however. Naoki Mizunuma finished just a hair behind, stopping the clock in a mighty 51.34 as the runner-up just .06 away from Kawamoto. Mizunuma was slower on the front half of the race, staring out in 24.24, but nailed a back half of 27.10 to make it a race to the finish.

Rounding out the top 3 was Katsuo Matsumoto, the 200m freestyle silver medalist at the 2019 FINA World Championships. Matsumoto has steadily been improving in this once ‘off’ event, coming in tonight with a lifetime best of 51.47. That result shaved .19 off of the 51.66 he logged last December in what is quickly becoming a competitive venture for Matsumoto.

Yuki Kobori hit a time of 51.87 for 4th place as the other sub-52 second swimmer, while Nao Horomura‘s 52.08 fell just outside of the exclusive club.

As mentioned, Kawamoto now slides into slot #4 among this season’s best performers worldwide and he’s joined by teammate Mizunuma who now ranks 5th in the world.

The all-time Japanese men’s performers list has also been shaken up, with Kawamoto rocketing up from being ranked as the 8th fastest man ever from his nation to now #4, ironically frog-hopping Mizunuma. Mizunuma’s previous PB of 51.43 rendered him as the 4th Japanese 100m fly of all-time but he’s now supplanted by Kawamoto.

Kobori also started out his career as a 200 freestyler. There something about that 100fl/200fr double.

Medley relay depth is really getting pretty crazy around the world. Having five countries with the potential to go under 3:30 (USA, GBR, Japan, Russia, maybe Australia) is crazy when you remember it took a 3:29.9 to win worlds in 2015.

I would not be surprised if Brazil went sub 3:30 .
Lanza had a terrible world as he split 51,2 only on relay and chiereghini a 47,6

This event has just got so fast recently.

Obviously Dressel’s been doing Dressel things, but everyone else has got faster too. 51.14 was the time Phelps/Le Clos/Cseh tied for silver on in Rio, now it seems that will probably just about make the final in Tokyo.

Even in Rio, everyone on here expected Le Clos and Phelps to be like 50.2 or 50.3 from my memory, but they were kinda dead I guess. 2017 worlds was a crazy fast final, it would be great to see something like that again this year.