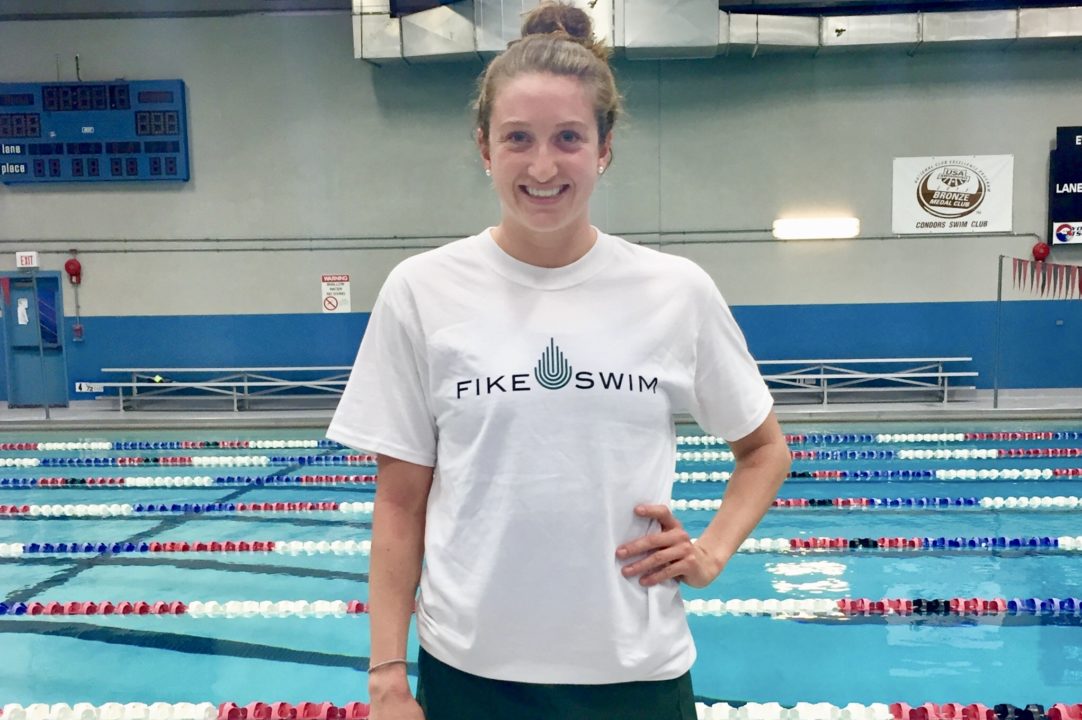 This article looks at Emily Escobedo’s path to college and professional swimming, choices that have consistently defied conventional wisdom and which are paying off for one of the world’s best swimmers. Current photo via

Great swimmers are supposed to go to big name schools like Cal, Stanford, NC State, and Texas and then on to big name pro teams like Team Elite and the Indiana Pro Group. That’s how conventional thinking goes. So when breaststroke standout and now National Team member Emily Escobedo chose the University of Maryland Baltimore County (UMBC) out of high school one club coach from another team said to her “Why did you choose UMBC? You’re faster than that.” This article looks at Emily’s path to college and now professional swimming, choices that have consistently defied conventional wisdom and which are paying off for one of the world’s best swimmers.

Emily’s high school career was characterized by the kind of rapid rise that normally leads to big dreams and big expectations. From her freshmen year in 2010 to her junior year in 2012 she dropped seven seconds in the 100 Breast and 23 seconds in the 200 Breast to qualify for Junior Nationals, and then she qualified for 2012 Olympic Trials in the 200. That kind of success can be a blessing and a curse. She was overwhelmed by the pressure of Trials and her own assumption that the ascension would continue, so much so that she added time at the meet. But at 16 years old and with at least one more Trials ahead of her, there was no better time to be overwhelmed and learn how to process the pressure of USA Swimming’s biggest stage.

With Emily’s rapid rise you would think she had her pick of college teams, but Emily didn’t want to go to any of the colleges known for being factories of Olympic talent. Being close to family was paramount, so she wanted to be within a four-hour drive of her home in New Rochelle, New York, eliminating all of the top 25 teams. She wanted a tightknit team with caring coaches like at her club, the Condors under Jon Hulbert. Plus, “I was young for my grade so most college coaches thought I was a junior and didn’t contact me until after I had already made a decision. In the spring I started receiving letters from some of the big programs.” Eventually she settled on UMBC because it gave her that sense of family that was so important to her and which she would be leaving behind. “The UMBC coaches and team felt very connected. The men and women train together, hang out together, and the coaches clearly love what they do and care about each person on the team.” The other recruiting trips she took were nice but after talking with her club coach and family, Emily knew her home away from home was UMBC. She would be the first in her family to play Division I sports.

Emily was clearly one of the big fish at UMBC, but she never felt or saw it that way. Some coaches tend to favor the scorers but according to Emily at UMBC it was only the effort that mattered. Each swimmer was as important as every other and the camaraderie that created was a powerful factor in Emily’s successful college career. The best conditioning in the world cannot overcome the depression of feeling like there is no team unity or like you don’t belong. How often do we see swimmers go to a program because it’s where they “should” go, only to leave early to try to find the right fit elsewhere? At UMBC, Emily had found the right fit, her second family, and it paid off big.

While at UMBC Emily continued her ascension through the ranks, knocking six more seconds off her 100 to place 9th at the 2017 NCAAs with a 58.48 and nine seconds off her 200 to place 3rd with a 2:05.20, and scoring all 30 of UMBC’s points. Along the way she also went into the 2016 Olympic Trials with a veteran’s perspective, moving from 58th in the 200 in 2012 to 10th and also qualifying for the 100. Our sport depends heavily on the mental aspect and Emily Escobedo rode her happiness at UMBC into the elite ranks.

Again, conventional swim wisdom says Emily Escobedo should have gone to a big pro team after graduation for the professional phase of her career, where she would have similar world-class talent to push her. Instead, Emily moved back to the Condors in New York to train alongside mostly high school swimmers in a yards pool, and for the same reasons that motivated her to choose UMBC- unity and happiness. And interestingly, her approach to breaststroke training is also at odds with traditional thinking, which puts major emphasis on kick since that can account for up to 80% of a breaststroker’s propulsion. Emily, however, does very little kicking in practice, choosing to focus on her whole stroke instead. In a typical 6,500 yard practice “some days we only do a 200 kick in warm up, and other days we do a small kick set, maybe 400-800 yards. Every once in awhile we will do a long kick set, but it’s not super common!” And in general, the workouts emphasize quality over quantity. “We do a lot of pace work and a lot of main stroke work. I would say most of my intense workouts are done breaststroke, or I also like to train IM. Usually twice a week we have pace days with 50s, 75s, or 100s breast. I don’t train much freestyle.”

As far as her training partners, Emily says she isn’t missing out on anything by training with high schoolers. “What matters most is the fit. I always have people to push me- the boys push me on freestyle and the girl butterfliers push my breaststroke, so I don’t feel disadvantaged at all. They work as hard as anyone.” And judging by recent results, she’s certainly not being held back. Emily placed 4th at last year’s 2018 U.S. Nationals, just missing the World Championship Team but earning her a spot on the 2019 World University Games Team and another year on the National Team. This means that since 2012 U.S. Nationals she has gone from the 58th fastest 200 breaststroker to the 4th fastest. At this rate, with over a year until the Tokyo Trials, Emily Escobedo could very well end up being our top 200 breaststroker at the Olympic Games.

While preparing for Tokyo 2020, Emily will be studying for a dual masters in early childhood education and special education and helping Fike Swim test and roll out more of the innovative products it is becoming known for. You can support Emily on her journey to Tokyo by following her Instagram and Facebook pages, and you can get the latest Fike Swim news, product updates, and videos by liking us on Facebook and subscribing to our YouTube channel. And you can get a candid look at our journey to help swimmers SWIM DIFFERENT by following us on Instagram.

These articles are meant to shine a deserving spotlight on our ambassadors, who are usually living between two worlds: the swimming world and the “real” world. As any competitive swimmer knows, life outside the pool is a juggling act, one that gets even harder when you are no longer a student-athlete and have to pay your own bills.

I’ve gotten to know Emily over the past few years and always like to see her. She is so genuine and sincere. She’s good for the sport, for sure.

Besides the point but as a woman breaststroker schools like Cal, NC State, and texas are certainly not schools that come to mind for having improvements in their breaststroke recruits

Ema Rajic this year at Cal might beg to differ.

Anyone read this article anticipating some magic training revelation related to swimming sets in a 33 meter pool, only to be disappointed?

Good on Emily for recognizing the right environment for her, and for having the conviction to rebuff those who undoubtedly told her she should be following a more “conventional” route for a swimmer of her talent.