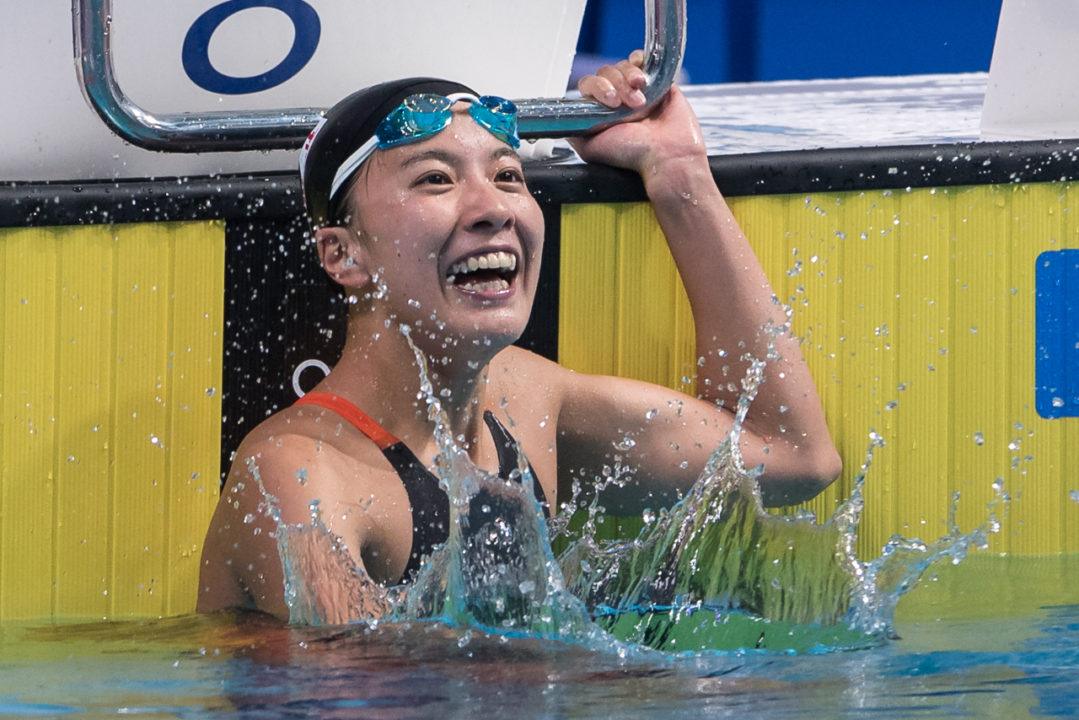 The Japanese Olympic Committee is reportedly planning on setting a 30 gold medal target for their home-hosted Games in 2020. Here are just 5 swimmers who may help make that goal happen. Archive photo via Peter Sukenik/www.petersukenik.com

With fewer than 800 days to go until the 2020 Summer Olympics get underway in Tokyo, the nation of Japan is already gearing up to set its eyes on a potentially history-making Games. As reported by Japanese media this week, the Japanese Olympic Committee plans to set the nation’s gold medal target at 30 for the 2020 Olympics, a 250% increase over the total number of golds its athletes produced at the 2016 Games in Rio.

At the last Summer Olympics, Japan finished 6th overall in the medal table, earning 41 medals in total. Of those, 12 were gold, 8 silver and 21 bronze, with judo garnering the most medals as a sport with 12. However, wrestling and swimming were next in line, carrying 7 total medals each, including 2 golds for swimming. Kosuke Hagino and Rie Kaneto each came away from Rio an Olympic champion, with Hagino winning the men’s 400m IM and Kaneto taking the women’s 200m breaststroke.

Kaneto has since retired, but, as evidenced by performances at the 2017 World Championships, the World Cup circuit, as well as domestic competitions, Japan’s arsenal of potential medal contenders is growing at a pace that may indeed push the nation towards its 2020 gold medal target. Along with the well-established threats of Hagino and his 400m IM Olympic bronze medal-garnering teammate Daiya Seto, here are just a few of the ones to watch within Japanese swimming, knowing we’re still 2 years out from the next Summer Games.

The upcoming Pan Pacific Championships will pit Ikee against similarly-aged rival Penny Oleksiak of Canada, a swimmer who Ikee already has publicly targeted.

Yui Ohashi
22-year-old Ohashi busted onto the international scene at last year’s World Championships, clinching the women’s 200m IM silver medal in a convincing new national record of 2:07.91. Although she finished just off the podium in the 400m IM (4th in 4:34.50), it took her less than a year to fire off a new NR in that event as well, crushing a new personal best of 4:30.82 in April 2018 at the Japan Swim. That mark moved Ohashi into the 6th slot in terms of all-time performers in the event and sets her up nicely to build her resume with another possible elite win at this summer’s Pan Pacific Championships.

With reigning double IM Olympic gold medalist Katinka Hosszu of Hungary just now getting back into the racing scene, Ohashi will have her hands full staying ahead of the best in the world. She’ll get a preview of battles to come, however, facing the fastest 200 IM swimmer in the world right now, Kim Seoyeong of Korea, at the Asian Games.

Reona Aoki
Although Japan raced away with the coveted gold medal in the women’s 200m breast in Rio, the nation was without representation in the 100m breast final at the last Olympics. However, 23-year-old Reona Aoki is showing promise of making sure that same result doesn’t transpire on her home turf come 2020, as she carries the world’s top time in the event at the moment in 1:05.90.

Katsumi Nakamura
In a span of just a week earlier this year, 24-year-old Nakamura broke down the barriers in Japanese men’s sprinting, clocking new national records in the 50m free and the 100m free in February. Nakamura had already established himself as a history-maker in Rio by becoming the nation’s first-ever man under 48 seconds in the 100m freestyle by leading off the men’s 4×100 relay in 47.99, but he hacked off another tenth to clock 47.87 at this year’s Konami Open. That was already after the then-23-year-old notched a new mark in the 50m free, touching in 21.87 at the 2018 Kirara Cup to slice .01 off of the previous 21.88 mark held by Olympic teammate Shinri Shioura.

Nakamura’s performances blast his Rio and Budapest times out of the water, as his bests between the Olympics and 2017 World Championships were in the 22.13 and 48.61 range. He ranks 2nd in the 100m and 9th in the 50m among the world’s best this season, but will be put to the test both at the Pan Pacific Championships, as well as the Asian Games. He’ll battle possible contenders Nathan Adrian, Caeleb Dressel, Ning Zetao, and Cameron McEvoy, among many others, across the two landmark international meets this year.

Yasuhiro Koseki
Although the name Ippei Watanabe comes to mind when one thinks of Japanese 200m breaststrokers, the reigning world record holder has been beaten by his compatriot Koseki on multiple occasions. Even as Watanabe nailed a new Olympic Record in the Rio semi-finals of the event, Koseki wound up finishing one place higher in 5th with a personal best of 2:07.80. Koseki also took a World Championships medal ahead of Watanabe, a bronze, in Budapest with his 3rd place finish of 2:07.29.

Koseki also had the upper hand at the Japan Swim this Spring, clocking 2:08.45 for the 200m breast win over Watanabe in a time that sits 8th in the world. Watanabe did fire back with a 2:08.30 at the Koseki-less Japan Open, however, to rank 4th in the world at present. But Koseki is dangerous in the 100m sprint as well, knocking on the door of legendary Japanese breaststroker Kosuke Kitajima‘s national record of 58.90. At the same Japan Swim, the 26-year-old Koseki cranked out a super quick 58.96 to produce the 2nd fastest time in the world this season.

I just wonder where the 30 golds are planned to come from.. is there any list? And sorry.. Can´t see any Gold on Men side swimming.. strongest possibility of all would be Ohashi..

You never know what will happen in two years, but I agree that Yui Ohashi would be their only gold hope if the Olympics was held this year.

I Know.. I Just want to see if there is a list of which sports they are expecting 30 Golds..

The Japanese are tricky little rascals…do not underestimate them

The 200 breast is wide open and the Japanese have got a couple of guys in the mix, including the world record holder.

Hagino and Seto will be in the fight for the IMs with Kalisz, particularly the 400.

They have two of the fastest 2breaststrokers in the world, both would be contending. Hagino swimming like he was in 2016 would be right next to Kalisz for gold in both IMs. They have a few great 2flyers but maybe no gold medal hopefuls. Tons of silver medal contenders in all sorts of events on men’s side. Ryosuke irie is looking better than he has in awhile, could steal the gold if nobody dipped under 52 like last years worlds.

Hagino in 2014 was insane, super fun to watch. Its difficult to say with Japanese because they go pretty fast in season but dont peak as high as everyone else.

I would think he has chances.. but with a guy named Milak now.. difficult to bet against the Hungarian..Also for the Men 200 breast,, Chupkov seems to have the way to deliver on his hands..

Also.. Nakamura can battle for podium on the 100 free, maybe even a Silver. but with Dressel and Fratus on Pan Pac.. his 50 will be battling for the minor spoil at best,,