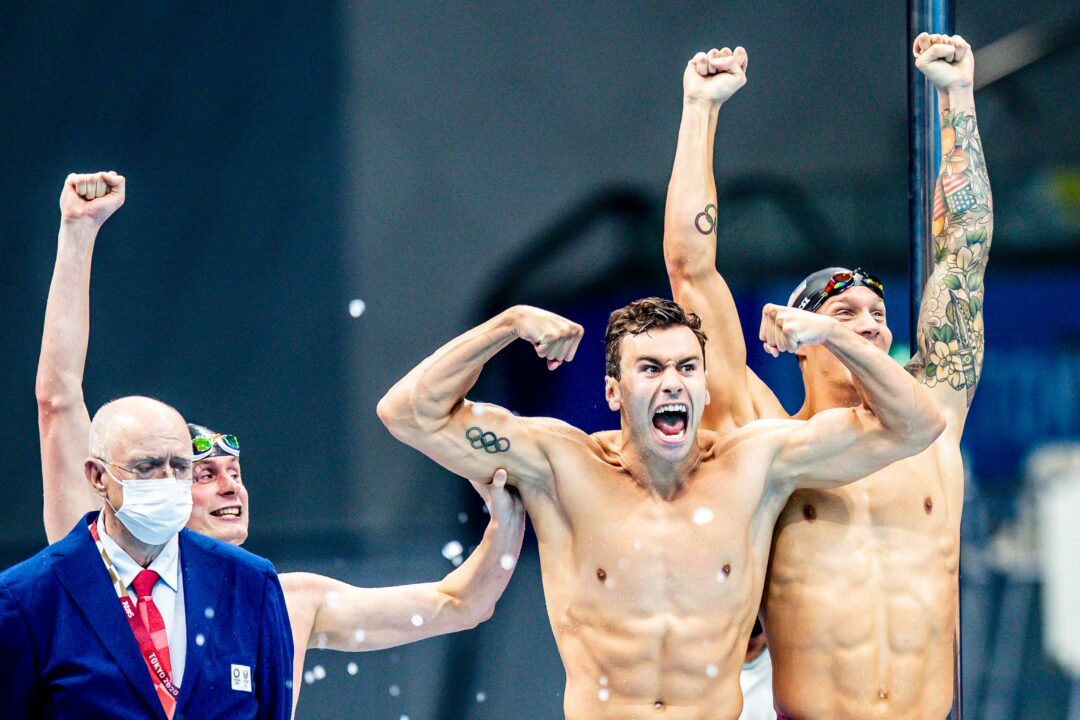 Blake Pieroni (middle) has been a crucial relay leg for the Americans throughout his career, winning three Olympic gold medals. Archive photo via Jack Spitser/Spitser Photography

The 26-year old says that while he has loved his time in the sport, he doesn’t “feel a burning passion to feel the best that he can be.”

Pieroni made his first Olympic team in 2016, where he swam a prelims leg of the American 400 free relay that won a gold medal. He split 48.39 on the prelims relay’s 3rd leg along with Jimmy Feigen, Ryan Held, and Anthony Ervin. Of that group, Held advanced to finals to swim with Nathan Adrian, Michael Phelps, and Caeleb Dressel as the group cleared France by half-a-second for the gold medal.

At the Tokyo Games, Pieroni qualified to swim on all three American men’s relays. In the 400 free relay, a 47.71 split in prelims was enough for him to earn a reswim in finals, where he split 47.58. The Americans this time won gold by over a second, ahead of Italy, in 3:08.97.

Pieroni also split 48.25 on the anchor leg of a 400 medley relay, with the finals team winning gold to get him more hardware.

He also swam the anchor leg of the prelims 800 free relay, splitting 1:46.21. The finals relay wound up pacing 4th, off the podium. If Pieroni had swum finals in place of his training partner Zach Apple, and repeated his split, the Americans would have won silver, hypothetically.

Pieroni pulled out of the USA Swimming International Team Trials earlier this year because of a knee injury that required him to have surgery in March. He was forced to pull out of the ISL season in 2021 after injuring the knee while lifting weights. His last race was at the FINA Swimming World Cup in Doha, Qatar in October.

He trained collegiately at Indiana, where in 2018 he became the first swimmer to ever break 1:30 in the 200 yard free. He swam 1:29.63 on the leadoff leg of the 800 free relay and opened the flood gates to the world of 1:29s: since then, three other men have done so (Dean Farris, Kieran Smith, and Townley Haas).

In his collegiate career, he earned 19 All-American honors, including the maximum seven as a senior. His highest individual NCAA finishes came in that senior season, where he was 2nd in the 100 free, 2nd in the 200 free, and 4th in the 50 free. He also placed 2nd in the 200 free as a junior in 2017.

As a prep swimmer, he also won a bronze medal on the American 800 free relay at the 2013 World Junior Championships.

I first saw Blake Peroni race in person at the 2010 Central Zone 14 & Under Championships in Nebraska. I vividly remember him running down relay swimmers from the Midwestern LSC team and Team Iowa (which I was helping as head coach) one session. Even back then he had excellent technique and was a competitive kid.
It has been a lot of fun watching him race a few more times in person at Big Tens, Nationals, Pro Series / Grand Prix meets, and Olympic Trials over the years (including that first sub 1:30 effort in the 200y Freestyle).
Congratulations on an amazing career and good luck with your future endeavors, Blake!

Is it me or did this article kinda throw Zach apple under the bus?

When I was coming up, Blake’s dad swam for my club team and had our high school’s record in the 50 and 100 free. I remember chasing that Pieroni record all throughout high school.

Later, I became editor of Splash Magazine. Over the years, I saw a ton of great races. I was poolside for all but two of Michael Phelps’ world records.

But watching Blake make the Olympic Team was one of the most exciting races for me, personally. I was so happy for him, his dad, his mom, his high school and club coaches Jim Voss and Kevin Kinel. So proud that a guy from “The Region” in Indiana made it to the big time.

Such a talent! Thanks for letting your Indiana fans cheer for you over the years. Congratulations on a phenomenal swimming career and best of luck in the next chapter of your life.

Ah yeah, seemed like that injury was going to be a big deal to come back from. Bummed with how that shook out, but he had a hell of a career.

I need to find the video of him making some wild sound at an interview at NCAAs from a while ago.

Awesome career Blake! On to the next chapter.

Great career! One of my favorite swimmers to watch.