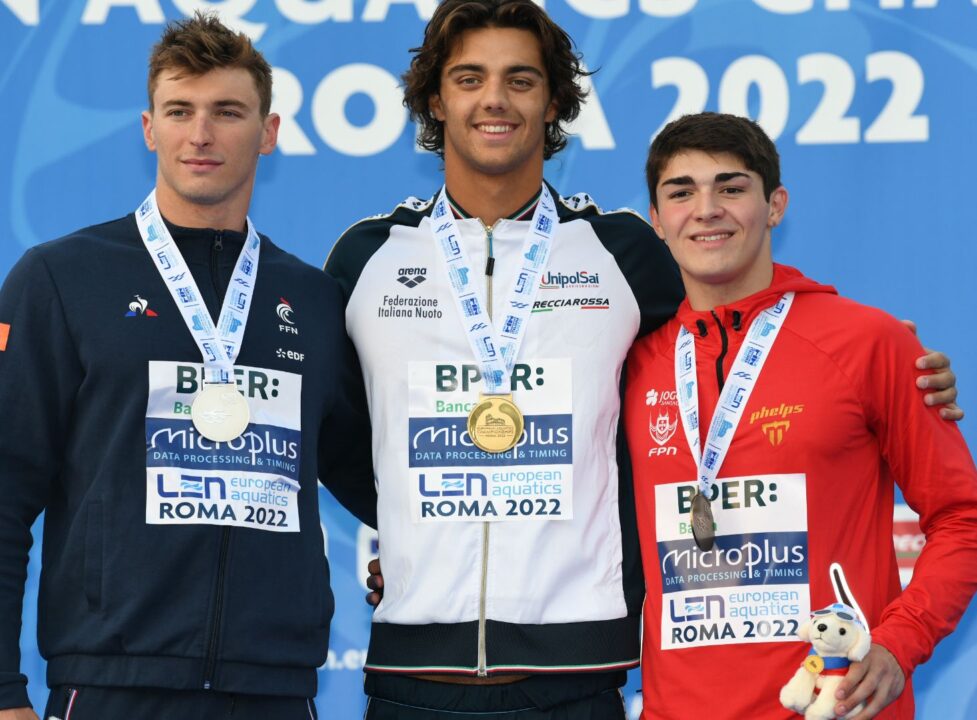 Portugal's Diogo Ribeiro (right) became the 100 free top seed this morning ahead of world record holder Popovici. He scratched to focus on the 50 fly final. Current photo via Fabio Cetti

Portugal’s Diogo Ribeiro scratched the boys’ 100 free semifinal tonight where he was the top seed to focus on the boys’ 50 fly final later in the session where he is ranked 3rd. He had a strong swim this morning, blasting a 48.67 in the 100 free and coming within .15  of his lifetime best time. This leaves the event to second seed and world record holder David Popovici who cruised to a 49.14 this morning. South Africa’s Pieter Coetze, the third seed, also scratched the 100 free, but he has no other individual races in this finals session. He scratched the 50 fly semifinals yesterday after placing 4th in prelims. #13 Lily Gyurinovics of Hungary dropped the girls’ 50 free semifinals.

Day five is one of the more semifinals heavy sessions we’ve seen so far with five finals and four semifinals. The session kicks off with the women’s 1500 free final where all eyes are on Turkish record holder Merve Tuncel, the top seed. She swept the distance freestyle events at the recent European Junior Championships and is likely to do the same here in Peru since the second seed, France’s Alexa Reyna is ranked 26 seconds behind her.

Next is the boys’ 100 free where Romanian sprint star Popovici is going in ranked 2nd after prelims. At the European Junior Championships, the 17-year-old posted a 46.86 to win this event and become the youngest world record holder since Michael Phelps. But, this morning it was Portugal’s Diogo Ribeiro who clocked the fastest time, 48.67. Now that Riberio has scratched the event to avoid a double swim tonight, he is set up for a tight race with Czech record holder Daniel Gracik and second seed Casper Puggaard of Denmark.

In the girls’ 100 fly, 15-year-old Mizuki Hirai was the only swimmer under the 1:00.00 mark in prelims. She and Italy’s Paola Borrelli, the second seed going into the final, had opposite strategies this morning with Hirai going out fast in 27.52. Borrelli had the fastest closing speed though and will likely give Hirai a close race tonight.

Day five is a sprinter’s dream – we’ll see semifinals of the girls’ 50 free and guys’ 50 breast alongside the girls’ 50 back final. There were three swimmers who finished within one-third of a second of each other in the girls’ 50 free this morning: Italy’s Matilde Biagiotti (25.58), Romania’s Bianca Costea (25.77), and Croatia’s Jana Pavalic. It is really anyone’s race and Pavalic has shown she is in great sprinting shape already after winning the girls’ 50 fly last night. The boys’ 50 breast will be an equally exciting race between top seed Uros Zivanovic of Serbia and Alex Sabattani of Italy who touched the wall .03 after Zivanovic in prelims. Hungarian 16-year-old Lora Fanni Komoroczy leads the girls’ 50 back final by about half a second.

The last individual event is the boys’ 400 IM final lead by Japan’s Riku Yamaguchi who is the top seed by more than 5 seconds. His versatility really set him apart from the field this morning as he posted the fastest back, breast, and free splits. But watch out for 400 free champion Stephan Steverink, the 2nd seed, and butterflier Krzysztof Chmielewski of Poland, the 3rd seed who took out the race in 55.97 this morning, about three seconds faster than everyone else.

The session will conclude with the girls’ 4×100 free relay which will mainly be a race between Italy, Hungary, and Brazil who are seeded within a second of each other.

True, but a medal is a medal, records are there to be broken, but finishing second after Popovici in 100 free is bigger achievement in the second best olympic event after the 100 meter in athletics.

Ribeiro must be taking aim at that 50 fly WJR.