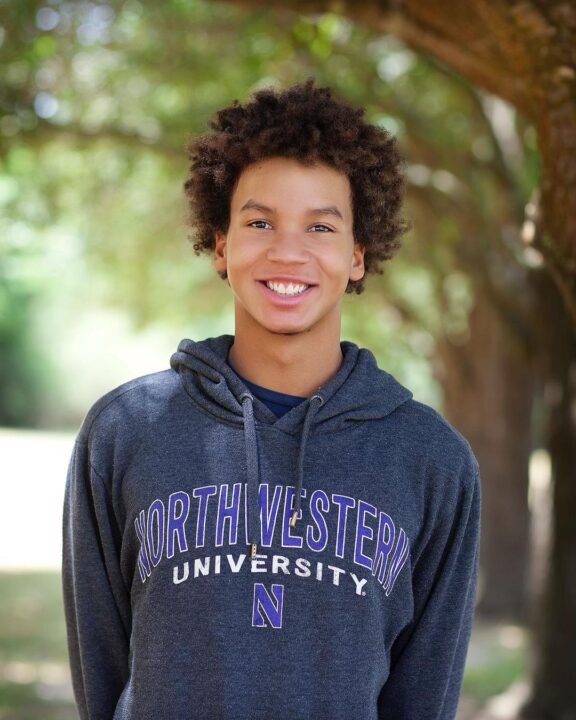 Duncan will be a big addition to the Wildcat's sprint group, with times that would have made the program's relays last season.

A multiple time NCSA Championships gold medal winner, Cade Duncan of Spring, Texas has announced his college decision for the fall of 2023, electing to continue his swimming career at Northwestern University in Evanston, Illinois. Duncan currently swims for the Dads Club Swim Team in Houston, Texas. Last spring Duncan competed at the 2022 National Team Trials, taking 36th in the 100 free.

Over the summer, Duncan came away from the NCSA Swimming Championships with a pair of gold medals, taking first in the 50 and 100 freestyles. In the 50, he claimed first by nearly half of a second, stopping the clock at 23.16. The 100 free was a closer race, with Duncan taking first by just two tenths of a second, finishing in 50.76. Duncan actually swam his lifetime bests in both events while leading off relays at the meet, swimming to 23.05 in the 50 and 50.71 in the 100. Both of those times put Duncan in the top-20 for 18-year-olds in the country this year.

With still a year of high school left to improve before he join Northwestern next fall, Duncan is set to be able to make a big impact for the Wildcats immediately after arriving on campus. During the 2021-2022 school year, his 100 free would have ranked him as the third fastest performer on the Northwestern roster. He would have also been less than a tenth of a second off of making the team’s 200 free relay.

Duncan will be a key addition next season, as the program will be set to lose it’s top sprinter performer from 2022, Federico Burdisso. Burdisso led the program in both the 50 and 100 freestyles last season. He’s also an Olympic medalist, having taken third in the 200 fly at the 2022 Olympic Games.

Joining Duncan in Northwestern’s freshman class of 2023 will be Diego Nosack, Aaron Baltaytis, and Stuart Seymour.

Get wild in that pool!

Cade, and his older brother Caleb, are the best examples of teammates, and I’m grateful to have swum with them. Congrats Cade!