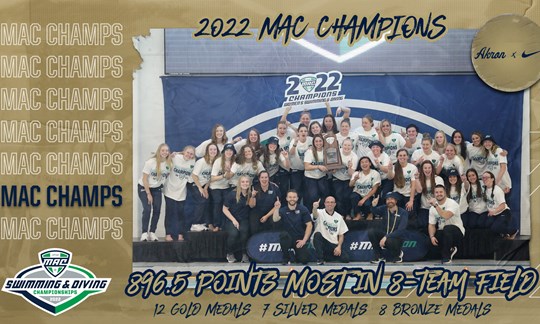 The Akron Zips are officially back kn top in the MAC, reclaiming the conference crown after a dominant day 4 performance. Current photo via Akron Athletics

The Akron Zips are officially back on top in the MAC, posting a decisive team victory at this year’s championships. Akron takes the title back from Buffalo, and has now won the MAC title 8 of the last 9 years.

The Zips had all but guaranteed victory heading into the final session of the meet, but they would go on to sweep Saturday night’s swimming events for good measure.

Things started in the 1650 free, where junior Gail Workman got into a tough battle with BGSU’s Kellie House and Toledo’s Jovana Duric. Workman would get her hand on the wall first by two seconds, however, swimming a 16:42.05.

The next race saw two of the top swimmers of the race, Akron’s Sarah Watson and Miami (OH)’s Nicole Maier, go head-to-head. In the 100 free, Watson was able able to get the better of Maier in a down-to-the-wire finish, clocking a 48.70 to Maier’s 48.71. The pair essentially swam stroke-for-stroke the whole way, making this one of the most exciting races of the meet.

Individual racing concluded with the 200 fly, where Akron’s Paulina Nogaj, another top swimmer of the meet, emerged victorious in a time of 1:58.24. Nogaj led the race from the start, and managed to hold the lead through the finish.

Buffalo’s Tori Franz picked off another diving event, winning 3-meter with a score of 322.95.

Keep up the dominance! GO ZIPS!!!