2022 U.S. National Championships: Swims You May Have Missed On Day 5 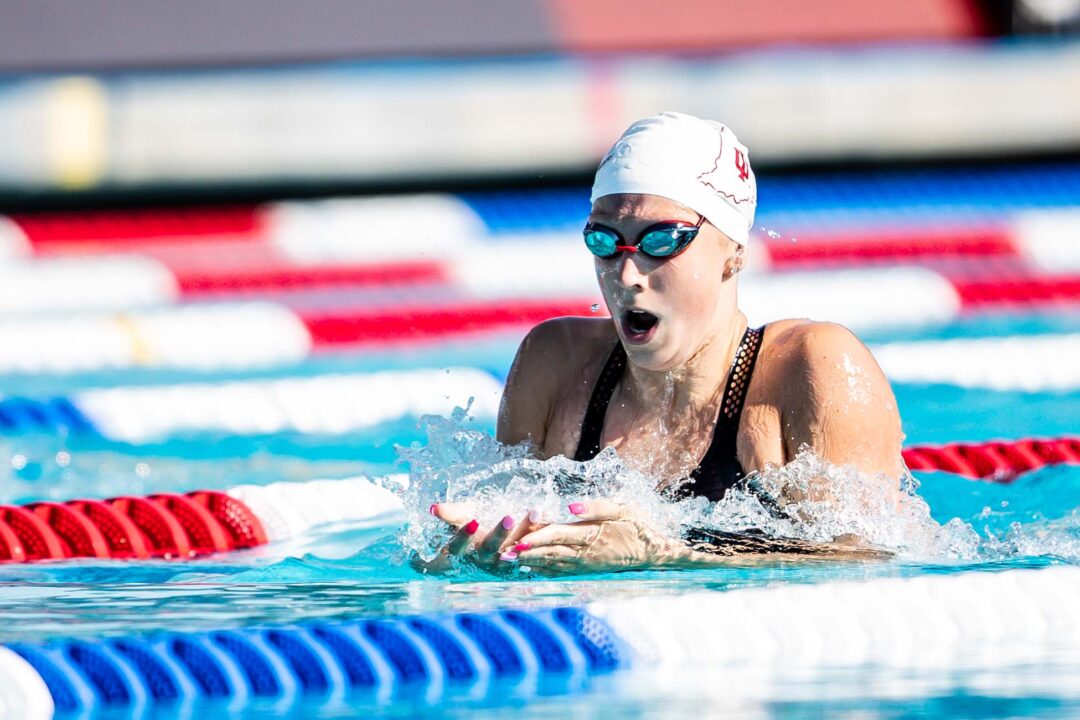 Nationals has concluded, but before our coverage of the meet stops, we bring to you some of the swims that you may have missed on the final day of the meet. Archive photo via Jack Spitser/Spitser Photography

The 2022 US National Championships has concluded, but before our coverage of the meet stops, we bring to you some of the swims that you may have missed on the final day of the meet.

Louisville’s Gabi Albiero has appeared on the podium twice this meet, going best times in both the 100 free and 100 fly. However, in the 50 free, an event where she did not finish top three, she also pulled off an incredible accomplishment. She finished fourth in the ‘A’ final in a time of 24.89, taking 0.13 off the 25.02 the set in prelims and getting under 25 seconds for the first time. Prior to the start of the meet, her personal best was a 25.22. This year, in both yards and meters, Albiero is having a major breakout season and set multiple best times. If she continues to improve in the sprint events, she could eventually qualify herself onto an international team in the future.

Coming into the meet, Arizona State swimmer Jack Dolan wasn’t even placed in a circle-seeded heat, having an entry time of 22.99. Then, in prelims, he charged to swim the third-fastest overall time in the heats at 22.14 to qualify for the ‘A’ final. He was a bit slower in finals, finished eighth with a time of 22.39, but he still had an impressive two swims today nonetheless. Previously in the meet, Dolan competed in the 100/200 free and the 100 back, finishing 13th in the ‘B’ final of the 100 back. Notably, his 100 free time of 49.88 was his first performance under 50 seconds, with his previous best time of 50.11 being from 2019.

Indiana’s Mackenzie Looze had a great comeback charge in the ‘B’ final of the women’s 200 IM, using her breaststroke talents to pass her competition. She was in seventh at the 100 meter mark, but then threw down a 37.32 breaststroke split to take the lead at the 150. After swimming the fastest breaststroke in the field by over a second, she then went on to come home in a 31.52 to secure victory in a time of 2:13.41, just a few tenths off her best time of 2:13.28. Earlier in the meet, Looze had won the 200 breast national title alongside finishing sixth in the ‘A’ final of the 100 breast and 11th in the 400 IM.

Jake Magahey‘s stronger events are the 200 and 400 free, where he went best times of 1:46.88 and 3;46.36 respectively and took home the national title in the latter event. However, he also dropped a considerable amount of time in the 800 free, finishing fourth. The Georgia Bulldog’s entry time was a 8:02.39, and he went over five seconds faster than that today to go 7:57.36 and finish fourth overall. That was his first time swimming under the eight minute barrier, and culminates a very successful meet for him after he had been sick earlier on in the year.

In May 2022, Crossfitter Kaitlyn Johnson went a 25.82 50 free to hit a U.S. Nationals cut wearing a kneeskin that she had borrowed from another swimmer. In the prelims of that meet, she had been wearing a six-year-old racing suit. Today, she bettered that 25.82 time in prelims, going a 25.56 to make the ‘B’ finals and getting under the 2024 U.S. Olympic trials cut of 25.69 (she hasn’t qualified for the meet though, as the window for qualification doesn’t begin until November 2022). In the finals session, she once again went faster, clocking a 25.42 to finish 13th overall. Considering that Johnson only swims once a week, to make the ‘B’ final at U.S. Nationals and get under the Olympic trials cut is pretty impressive.

What are Australians competing in US Nationals?

I just LOVE the story and accomplishments of Kaitlyn Johnson!
I mean, you talk about GIRL POWER — she really has the drive, the motivation, and the skill for greatness!
Brava!

Since he wasn’t mentioned in the article on the race (did Casas really swim alone? He was the only performer mentioned in the 200 IM article), one might have missed Grant House who placed 2nd, trailing only Shaine at the end of each 50 leg. For a 24 year old athlete, House had a pretty remarkable meet, reaching a PB in 5 events (4 in the meet and a TT)

Missing the best announcer ever, RIP Sam Kendricks 😢 the voice of so many National meets.