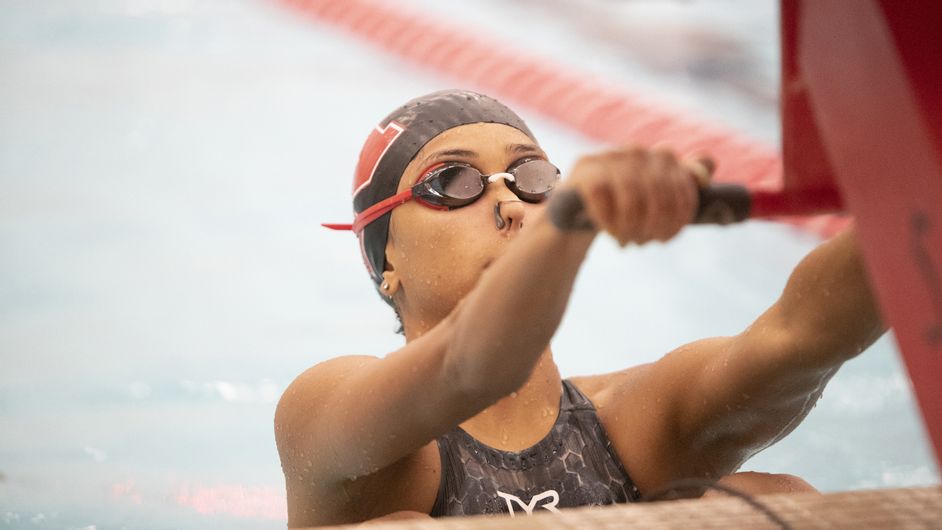 On the final day of the 2022 Hawkeye Invite, the Nebraska Huskers came out on top of the team standings by a 185.5-point margin. Current photo via Dillon Galloway

Rutgers’ Madison Murtagh kicked off the session tonight by posting a personal best time of 16:20.90 to win the 1650 by almost 14 seconds. Murtagh’s time is the third-fastest in program history, and puts her well below the NCAA ‘B’ cut. Nebraska’s Genevieve Jorgenson (16:34.48) and Molly Rosenthal (16:45.85) picked up 2nd and 3rd, respectively.

Alice Scarabelli picked up another win for the Scarlet Knights in the 200 back, beating Nebraska’s Madesyn Ronqillio by just over a second. She swam a new personal best time of 1:57.16 to move up to sixth on Rutgers’ All-Time Top-10 list.

Rutgers continued their winning streak in the 100 free, with Sofia Lobova taking 1st with a season best time of 50.05. Iowa’s Sabina Kupcova took 2nd with a best time of almost a second to post a 50.26.

Nebraska sophomore Maia Hall won the 200 breast with a best time of 2:10.76, making her the third-fastest performer in program-history. The Illini had a strong showing in the event, with freshman Sara Jass picking up 2nd in a best time of 2:13.32, and senior Kaleigh Haworth taking 4th in a best time of 2:14.74. Their swims rank 2nd and 5th on Illinois’ all-time performance list.

Nebraska’s Shannon Stott captured the final individual event of the night, as she won the 200 fly in a best time of 1:58.15. Rutgers’ Sofia Chichaikina, who led by a few tenths at the halfway point, ended up touching 2nd with a 1:58.22. Nebraska’s Alexa Kucera (2:00.97) and Illinois’ Alexis Wendel (2:01.36) picked up 3rd and 4th respectively, both clocking personal bests times.